A new column featuring a "visual commentary," in the form of a graphic essay; this week: underage workers in Mahane Yehuda market.

By JULIA SCHILLER
View Point: Confronting child labor 370
(photo credit: Julia Schiller)
Advertisement
It is a well known cliche that ‘a picture is worth a thousand words.’ However there is also truth in this platitude. In our Comment and Features section we are used to reading text with photos that go along with what it written. With this column we attempt to carve out a space for a visual commentary, in the form of a short graphical essay on a topic of the artist’s choosing. Using photography or other visual mediums to present an opinion or comment on an issue allows the reader to see more deeply inside a topic that otherwise one might not be aware of. For our first column we examine the issue of child labor. One can write all they want about the issue of child labor and provide statistics about it but when one sees the images of the actual youth employed in Israel one recoils with shock that those who are supposed to be entitled to public education are spending their days lugging heavy loads and working. It raises questions about why they are denied by their employers, families and the police who seem to turn a blind eye, the right to an education and a choice as to fair wages and decent employment.– The Op-Ed EditorText and Photos by Julia SchillerThe predominant perception of Israel tends to be one of modernity and progress in the Middle East, yet there is a prevailing ambivalence to child labor in our country. Developed nations abolished it over a century ago. In 2009 I undertook the project of documenting child labor in Jerusalem’s Mahaneh Yehuda market. 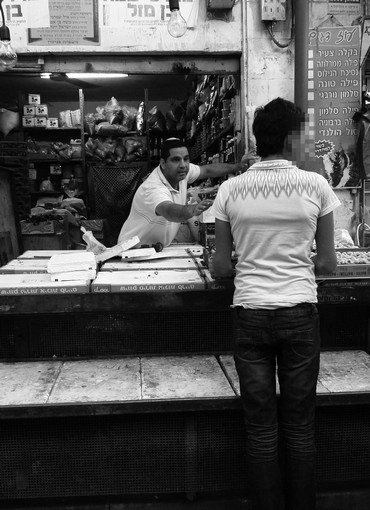 Many of them know that their work in the shadow economy
Over the years one child in particular, “K.,” has explained the dynamics of the working in the market. He started working on Friday afternoons as a seven-year-old and can now be seen behind a vegetable stall every day drinking Red Bull, playing with his light-up yo-yo and bargaining with customers over the price of tomatoes.It wasn’t until 1998 that Israel passed its version of child labor laws with The Youth Employment Law, prohibiting children under the age of 15 from working long hours or in a strenuous work environment. Combined with the Compulsory Education Law of 1949, that requires every minor to attend school until the age of 16, it makes it illegal to employ children under the age of 16 on weekdays. 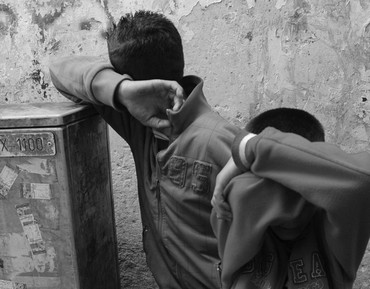 CHILDEN COVER their faces from the camera.
The police seem to turn a blind eye in Mahaneh Yehuda.Israeli shopkeepers employ children as young as eight, paying them considerably less than minimum wage.Finding out the true ages of these children is difficult as they know better than to reveal the truth. Most are Arab children who come from east Jerusalem and surrounding areas to work long hours. Such blatant violation of Israeli and international law, meant to protect our most vulnerable citizens, is abhorrent in a modern Jewish state. 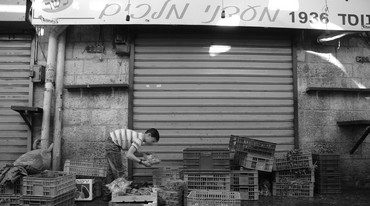 A BOY moves vegetables from a crate to a nearby store.
Advertisement
Subscribe for our daily newsletter