Tuesday morning's attacks brought back memories of the second intifada for perhaps the first time since the current wave of violence began. 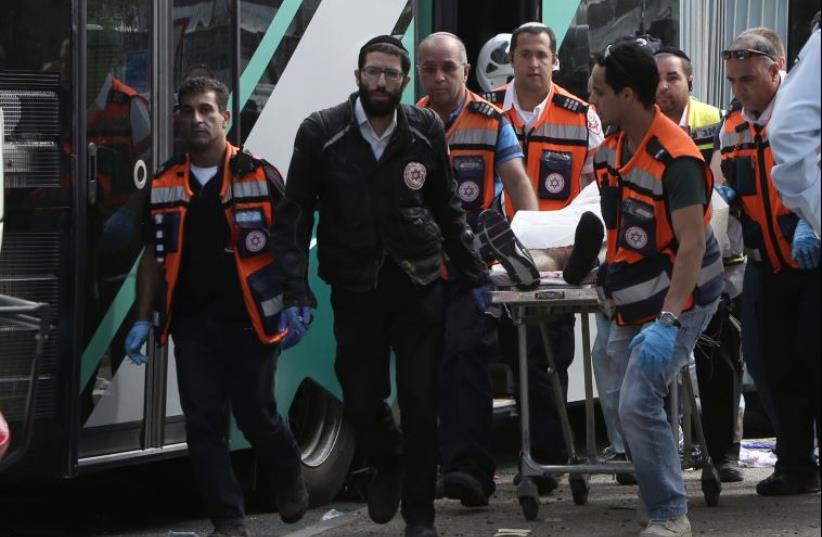 Scene of terror attack in Armon Hanatziv
(photo credit: GALI TIBBON / AFP)
Advertisement
Everyone’s talking about whether the situation in Israel these days is as bad as it was during the height of the second intifada more than a decade ago.Back then, we were bombarded with nonstop reports of gruesome suicide bombings with multiple casualties. No sooner had one atrocity exploded onto our consciousness when another replaced it.Tuesday morning’s events – for perhaps the first time since the wave of terrorism began earlier this month – brought those memories back with full force: a stabbing attack in Ra’anana; the deadly attack on a bus in Jerusalem; another stabbing in Ra’anana; and yet another attack in Jerusalem with another fatality.For anyone who lived through the second intifada, the comparisons couldn’t have been more barefaced.The only difference between then and now was the mode of attack – knives replacing bombs for the most part – and the immediacy with which we received the information without having to be glued to the radio or TV.
How can Israel put an end to this wave of terror?
For better or worse, Facebook and Twitter have made us all first responders to this current wave of terrorism. With only a smartphone, we are all as “smart” as the media, the police and the government. Otherwise, this transparent intifada shares many of the same characteristics with its older brother – indiscriminate Palestinian terrorism and increasing draconian measures to cope with it.The last Palestinian war against Israel resulted in walls, barriers and fences being erected to keep out the suicide bombers – a new reality that has shaped the last decade of the Israel-Palestinian conflict.This time, there’s talk of all kinds of measures – a closure for east Jerusalem residents, a military campaign and we’re already witnessing a huge uptick in security presence throughout the country.
What are the Palestinians hoping to achieve? ‏
We Israelis, who experienced those dark times more than a decade ago, carried on with our lives, continued to ride buses, sit at cafes (with the new attraction of guards at the entrances) and maintain a semblance of normalcy amid highly abnormal events.That will happen this time, as well, whether the situation returns to a low flame, continues at its current torrid pace or, horrible to think, intensifies in bloody escalation.The message we will send to Palestinians terrorists is that you will not achieve what you want this way – we will not be deterred by your barbarous ways.At the same time, the message that needs to be sent to our own government is that strong measures may help bring about a temporary lull in the onslaught against us – but what then? We’ll be strong and vigilant and unite against the common enemy. We’ll do our part, but is the best you can offer us in return that you’ll quell the next round of terrorism when it returns next month or next year? Leadership needs the vision and courage to face the challenge facing us – not complacently wait for a flare up and react instinctively and necessarily with force.There’s no doubt that we’ll emerge from this round of terrorism just as we did the last time and we’ll go back to our slightly schizophrenic lives in this maddeningly vibrant country.But we deserve more – the hope of longterm security and, dare we even imagine, the glimmer of long-term peace.For now though, we’ll settle for a day of quiet.