Saying 'Tel Aviv' on the streets of Istanbul

Comment: Israelis and Turks have a lot in common.

By elana kirsh
JULY 26, 2010 17:45
blue mosque istanbul 311
(photo credit: Elana Kirsh)
Advertisement
I was speaking to a bartender recently who responded to my telling him that I live in Tel Aviv by saying “Ah, Falastine?” When I corrected him, saying that the area is not contested, though there are other areas that I hoped would one day be part of Palestine, he shrugged and said, “I really don't know enough to comment.” I met the said bartender, secular, in his early thirties and from the south of Turkey, during a long weekend in Istanbul, after the most recent diplomatic breakdown between Israel and Turkey following the IDF's interception of a Gaza-bound flotilla last month, but before the Prime Minister’s Office Counter-Terrorism Bureau lifted a travel advisory which recommended that Israelis refrain from visiting Turkey. RELATED:
Comment: Anatomy of an ongoing crisis
Opinion: The humanitarian showAnd so I wasn't quite sure what to make of it when my new Turkish friend, who asked not to be named, stated matter-of-factly “everybody knows” Israel and America are in fact one and the same. Torn between having an argument, launching into a diatribe, and interviewing him, I told him that I don't envy the position of Netanyahu or Obama, what with all the magnitude of the decisions they have to make. He agreed, and brought over another round of raki. “The Turkish people have no ill will towards Israeli people themselves,” he told me later in the evening. “We just don't like the government.” What can I say, to me that sounds like healthy criticism, not th 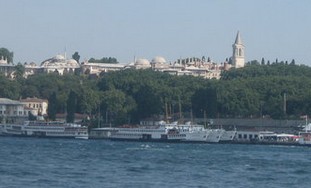 A water view in Istanbule anti-Semitism which we are being led to believe is brewing on the streets of Turkey. Earlier in the trip, however, my first attempt at finding out what the average Turk on the street thinks of the Holy Land was much less successful, and indeed less moderate. After spending a day “pretending” to be Australian, I decided to try another response to the “hey, where you from?” as I passed waiters and storekeepers along the street. The first time I answered “Israel,” I was met with a babble of responses from a group of locals sitting around the front of a souvenir shop. “Shalom,” said the first, quickly followed by a “free Gaza,” a “free Palestine,” and my personal favorite, “we hate Israel.” Not surprisingly, a few more similar experiences put me off announcing my adopted nationality to random people on the street. This aside, I'm convinced that Israelis and Turks are far more alike than recent media hullabaloos would have us believe. Both countries have tensions brewing between their secular and religious populations, and at the same time hold more trivial things in common such as the ways popular bars get around tightened anti-smoking laws. We have similar climates, mixed cultural influences and tastes in food, Ottoman architecture, and our governments deal with dissident extreme factions on a day-to-day basis. From the person-to-person level up, there's plenty for us to bond over. 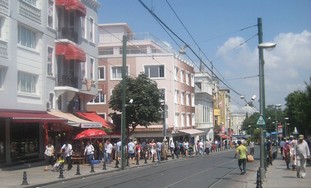 A street in downtown Istanbul
My experience with Israel-Turkey relations began before I even booked my ticket, as I spoke with Israelis about my planned trip. “Istanbul is a horrible, smelly city. You'll love it,” a Netanya-born relative informed me in typical blunt Israeli style. Others encouraged me to go, while warning me to “be Australian” once within Turkey. Turkish Airlines made their announcements in Turkish, English and Hebrew, though the majority of the passengers on the flight seemed to be either backpackers, Arab Israelis or Israeli businessmen. At no point during my time in transit did I feel unsafe, even when I inquired at the passport desk at Havalimani whether I would be better off to enter the country on my Australian or my Israeli passport. With a smile and stuttered limited English, the customs officer pointed to my Israeli passport and told me “This is good,” which I took to mean “free,”and not as a political comment. Indeed, using my Australian passport I would have incurred a 15 euro fee, whereas with my Israeli passport entry was free, and so I entered Turkey with a smile, stamped as a Jew. In the heart of Istanbul, I was blown away by the blend of cultures, the East meets West, Europe-Asia-Middle East melting pot which felt familiar and foreign all at the same time. The other tourists around me, visiting every mosque, mausoleum, palace and park in the city, crossing the Europe-Asia bridge and feasting on pide, gozleme and kunefe were a mixed bunch, from American girls in denim shorts to classy French-Arabs, Middle-Eastern women in full burkas fitted with visors and sunglasses to blond German couples. And yet in this muddled Tower of Babel, not a word of Hebrew.At the end of my trip, I was disappointed to find that there was nowhere in the airport which would sell me shekels, but decided not to look into it too much. And when my Turkish Airlines flight landed in the middle of the tarmac at Ben Gurion, and we walked down the stairs and certain passengers were required to show their passports to plain-clothed security guards, I asked myself, am I being paranoid and over-analyzing here? Or are we keeping each other at arms' length?Granted, I have nothing solid to report here, not even a conversation about the flotilla while looking out over the Sea of Marmara, but nonetheless I'm going to continue to view the fiery exchanges between the likes of Foreign Minister Avigdor Lieberman and Turkish President Recep Tayyip Erdogan for what they are, just words, and hope that both Turkey and Israel can fight off the extreme elements which are fast pulling them away from each other.The writer is the Internet desk manager at JPost.com.
Advertisement
Subscribe for our daily newsletter