Why I’m traveling to Rwanda

Some things transcend politics. Preventing genocide is foremost among them.

By SHMULEY BOTEACH
SHMULEY BOTEACH in Rwanda
(photo credit: Courtesy Shmuley Boteach)
Advertisement
I always promised myself that if I ever ran for public office I would highlight anti-genocide legislation as one of the principal planks of my platform. As such, I’m traveling to Rwanda this week where I will visit the main locations of the mass slaughter of the Tutsis by the Hutus in 1994. My trip is being organized by James Smith, my old friend from the UK who runs a genocide remembrance center in Rwanda.In addition, Samantha Power, President Obama’s principal adviser on Human Rights and Multilateral Affairs and the foremost anti-genocide advocate in the world has been very helpful in introducing me to the staff of the American Embassy in Kigali, with whom I will also meet.Unexpectedly, my daughter Chana, who serves in the Israeli army, was also helpful when her unit hosted the Rwandan chief of staff and she shared with him how much her father has read and written about the genocide leading the chief of staff to kindly invite me to Rwanda.The Rwandan genocide of Tutsis by Hutus happened at a rate even quicker than the liquidation of Jews at the hands of the Germans. The best estimate is that 800,000 were killed in a hundred days, which translates to 334 murders per hour, or about six murders per minute. 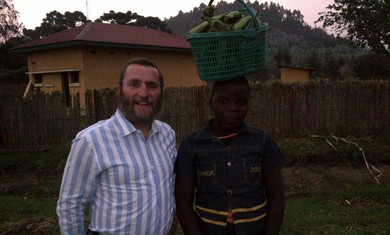 Most of these were low-tech executions by machete. Tens of thousands of others were horribly maimed, but did not die.And why would a would-be Congressman from New Jersey travel across the globe in the middle of his campaign to highlight the slaughter? Because Rwanda represents one of the lowest points in American foreign policy where the mightiest, richest nation on earth did not lift a pinky to rescue almost a million of the poorest people on earth.As Phillip Gourevitch explains in his definitive account of the Rwandan genocide, We Wish to Inform You that Tomorrow We will Be Killed with Our Families, President Clinton, still haunted by the murder of American soldiers in Somalia, chose to take no action in Rwanda. Worse, his administration obstructed the efforts of other nations to stop the slaughter.On April 21, 1994, the Canadian UN commandeer in Rwanda, General Romeo Dallaire, declared that he required only 5,000 troops to bring the genocide to a rapid halt. In addition, a single bombing run against the RTLM Hutu Power radio transmitting antenna would have made it impossible for the Hutus to coordinate their genocide.But on the very same day, the Security Council, with the Clinton Administration’s blessing, ordered the UN force under Dallaire reduced by 90 percent to a skeleton staff of 270 troops who would powerlessly witness the slaughter to come.This in turn was influenced by Presidential Decision Directive 25, which “amounted to a checklist of reasons to avoid American involvement in UN peacekeeping missions,” even though Dallaire did not seek American troops and the mission was not peacekeeping but genocide prevention. Indeed, Madeleine Albright, the American Ambassador to the UN, opposed leaving even this tiny UN force. She also pressured other countries to duck, as the death toll leapt from thousands to tens of thousands to hundreds of thousands – the absolute low point in her career as a stateswoman.In the end, eight African nations, fed-up with American inaction, agreed to send in an intervention force to stop the slaughter provided that the US would lend them 50 armored personnel carriers. The Clinton Administration decided it would lease rather than lend the armor for a price of $15 million. The carriers sat on a runway in Germany while the UN pleaded for a $5m.reduction as the genocidal inferno raged. The story only gets worse from there, with the Clinton State Department refusing to label the Rwanda horrors a genocide because of the 1948 Genocide Convention that would have obligated the United States to intervene.All this could be dismissed as something that happened 18 years ago and does not much matter now.But as we’ve learned, history is always destined to repeat itself.Every day innocent men, women and children die in Syria with the world scarcely giving a damn. Russia has blocked every UN effort to merely Bashar Assad for the slaughter, yet the United States has not even removed its Ambassador from Moscow to protest this protection of a head of state butchering his people.I watched this week from London as Prime Minister David Cameron joked with the visiting Vladimir Putin about how the two would watch, but not participate in, Olympics Judo. Ha ha. But the cruel joke is unfortunately on the people of Syria as Western leaders continue to roll out the red carpet for a Russian president whose hands are dripping with innocent Arab blood.As for the UN, well, this is the same body that lowered its flags last year to half-staff to mourn the death of the great leader Kim Jong Il of North Korea, who starved more than three million of his people to death.This past week we Jews read the Ten Commandments in synagogues throughout the world. I was asked to speak at the Marble Arch Synagogue in central London where they were commemorating the one 100th birthday of Raul Wallenberg, the Swedish diplomat who saved tens of thousands of Jews during the holocaust and paid for it with his own life.I chose as my theme the sixth commandment, Thou Shalt Not Murder, and asked why thousands of years after God issued this simple directive, mass slaughter continues to plague our world. I concluded that humanity has yet to muster the resolve to be truly horrified by murder or to feel repulsed by those who practice it.It is in this spirit that I call upon US President Obama to honor his campaign pledge of 2008 to recognize the Armenian slaughter of 1918 by the Ottoman Turks for what it was, a genocide. I also ask my political opponent for the Congressional Seat in the Ninth District in New Jersey, Bill Pascrell, to join me in a press conference where we both call upon the United States to put a $25m. bounty on the head of Assad for his arrest for crimes against humanity, and for the removal of the American Ambassador to Russia so long as Putin continues to protect Assad’s murderous regime.Some things transcend politics. Preventing genocide is foremost among them.The writer, a rabbi, is the international best-selling author of 28 books, and the Republican nominee for New Jersey’s Ninth Congressional District. Follow him on Twitter @RabbiShmuley
Advertisement
Subscribe for our daily newsletter