PM stresses peace is based on Israel's ability to defend itself; Peres says bi-national state contradicts ethos of Zionism.

By HERB KEINON, JPOST.COM STAFF
JUNE 27, 2013 12:31
Prime Minister Binyamin Netanyahu speaking at Mt. Herzl 370
(photo credit: GPO / Kobi Gideon)
Just hours before US Secretary of State John Kerry arrives in Israel to again push for a restart of Israeli-Palestinian negotiations, Prime Minister Binyamin Netanyahu warned Thursday that an accord will not end the "wild slander" and delegitimization of Israel.

Netanyahu, speaking at an anniversary ceremony marking the death of Zionist visionary Theodor Herzl, said that the type of anti-Semitism that motivated Herzl to dream of a Jewish state has now been transferred onto Israel.

Peace, Netanyahu said, "is desirable in itself. Peace is based on security. It is not, as some think, based on good will and legitimacy. It is based first of all on our ability to defend ourselves. Without security, without an army that Herzl called for, we will not be able defend the peace, we cannot defend ourselves if the peace unravels."

Netanyahu said that security is a fundamental condition to both the achievement and maintaining of peace.President Shimon Peres urged the government on Thursday to seize the opportunity presented by Kerry to re-launch peace negotiations with the Palestinians.At the ceremony, Peres said that a bi-national state contradicts the original premise of Zionism, echoing an argument used by advocates of a two-state solution. 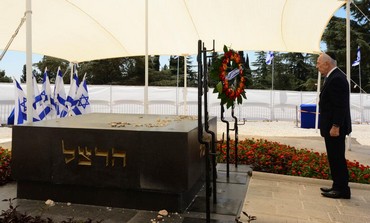 “There is a chance to renew the peace process, and we mustn’t miss it,” the president said. “Everyone must help in seeing that this effort to re-launch the diplomatic process succeeds.”"Peace is a moral foundation of Judaism; it is an existential need of the Jewish state," Peres said, adding that Israel "welcomes the arrival of Secretary of State Kerry, to Israel," and intends to help the process succeed.Referring to Herzl, the president said the grandfather of Zionism was "right in his belief that the Jewish State is a necessity.""The curse of rising anti-Semitism, the rise of Nazism and the terrible Holocaust proved Herzl's tragic forecast to be right," Peres stated."Because for the state to be a country for the Jews, it should have a majority of Jews," the president said, but stated that the historic right to a state alone "does not sufficiently establish the political reality," in an apparent reference to the country's minorities.Peres referred to Herzl's writings on non-Jewish citizens of the Jewish state, saying that he believed the state would be established in peace and "full equality."Quoting Herzl, Peres said that holy places would "become the property common to all believers. The slash of the sword, delayed the date of the peace.""Peace with our neighbors remains a core element of the Zionist ideology and only with peace will the vision of the visionary of the state be complete," Peres said, quoting Herzl's famous words.Concluding, Peres stated that Herzl's vision was "devoid of violence and packed in good faith. Even when encountered with violent opposition and forced to carry a shield, the Zionist ethos remains an ethos of peace."