Nikki Haley at Yad Vashem: 'We must always choose a side'

US Ambassador to the UN Nikki Haley toured Yad Vashem on Friday. 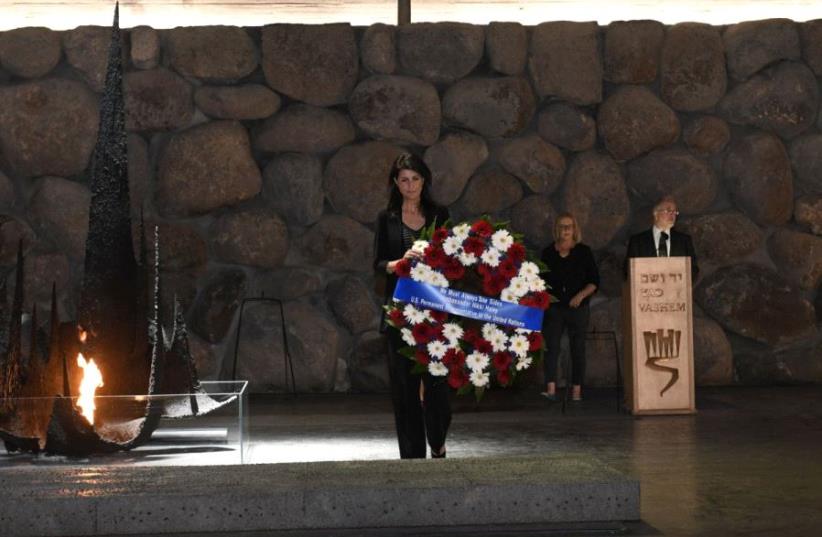 Nikki Haley lays a wreath at the Yad Vashem Hall of Remembrance, June 9 2017.
(photo credit: JORGE NOVOMINSKY/YAD VASHEM)
Advertisement
US Ambassador to the UN Nikki Haley visited Yad Vashem on Friday, during the third and final day of her Israel visit.Haley toured the vast Holocaust museum in Jerusalem, accompanied by Dr Robert Rozett, Director of Yad Vashem Libraries, and participated in a memorial ceremony in the museum's Hall of Remembrance. Haley laid a wreath in memory of those killed during the Holocaust. Signing the Yad Vashem guest book, Haley wrote that "we must always honor and remember the lives lost during one of the most horrible times in history. There is a lesson here. Leadership is not about power. Leadership is the acknowledgment and value of human dignity. We must always choose a side."On Thursday, Haley crossed the country by helicopter from north to south, accompanied by IDF brass and her Israeli colleague Danny Danon, who briefed her on the state’s vast security challenges.Haley began the day by visiting Bethlehem and an UNRWA school in the Aida refugee camp.She posted a photograph of herself with Palestinian women stating that she had the “chance to talk with girls and women about their lives, their hopes and their dreams.”Accompanied by Danon and Deputy Chief of Staff Maj.-Gen. Aviv Kochavi, she then flew by helicopter to the border with the Gaza Strip.Her visit was closed to the media, but the US Embassy posted a short video of the trip, including shots of Haley standing in the tunnel Hamas had dug from Gaza into Israel.In Kibbutz Nahal Oz, she spoke with residents about their experience of living under fire from Gaza, asking mothers there how it is to live in the shadows of the missiles. In 2014, Daniel Tregerman, four, was killed by mortar fire there. One boy told her, “The children of Nahal Oz thank you. Have a nice day in Israel.”The American diplomat then flew north, first for security briefings along the Lebanese border. She visited Kibbutz Misgav Am, received a security briefing, met with UNIFIL head Maj.-Gen. Michael Beary, and spoke to female IDF soldiers responsible for monitoring developments directly across the border.