The Liga Bet team created in 2008 by fans of former top-flight side Maccabi Jaffa, was simply not in the same league as its more illustrious opponent. 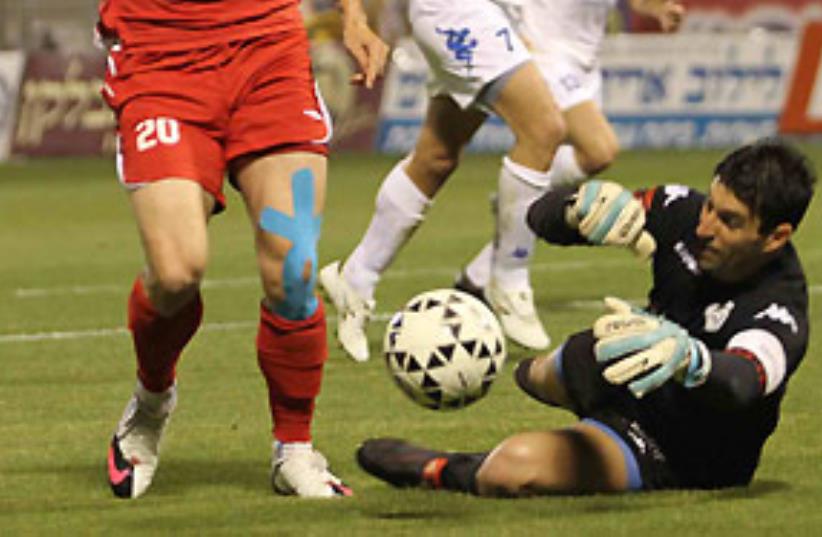 bojan vrucina 311
(photo credit: Adi Avishai)
Advertisement
Maccabi Kabilio Jaffa’s dream State Cup run came to an abrupt end on Tuesday evening with a 5-0 defeat at the hands of Hapoel Tel Aviv in Rishon Lezion.Jaffa, the Liga Bet (fourth division) team created in 2008 by fans of former top-flight side Maccabi Jaffa, was simply not in the same league as its far more illustrious opponent.Eli Gutman’s Tel Aviv side, which has held on to second place in the Premier League for the entire season, was 4-0 up by the half and cruised into the quarterfinals.There was only one upset in the quartet of last 16 games played on Tuesday, with National League side Upper Nazarth knocking out top-division club Hapoel Petah Tikva on penalties.Goalkeeper Avi Ivgi was the hero of Nazareth, performing admirably during the 120 minutes, which ended 0-0, and then scoring the winning penalty in the shootout.Petah Tikva’s players appeared to be drained of confidence by the end of extra time, missing all three penalties.Also Tuesday, Maccabi Petah Tikva had few problems defeating Bnei Lod 3-1, while Bnei Yehuda needed a 74th minute Pedro Galvan goal to oust Hapoel Ashkelon.The knockout drama will continue on Wednesday with four more games, headlined by Betar Jerusalem hosting Maccabi Tel Aviv in the tie of the round.Maccabi Haifa’s quest for an historic league and cup double will take Elisha Levy’s Greens to Hapoel Ramat Gan on Wednesday while Ashdod SC hosts Bnei Sakhnin and Ironi Ramat Hasharon welcomes Hapoel Beersheba.
Hapoel Tel Aviv 5, Maccabi Kabilio Jaffa 0
The romanticism of the cup was plain for all to see before the kickoff in Rishon.The thousands of Maccabi fans had been given a boost earlier in the afternoon when it was announced that team captain Gabi Burstein had decided to forfeit his day job as Hapoel Tel Aviv goalkeeping coach in order to play in the biggest game of his life.Hapoel coach Gutman had warned Burstein not to play against his employers, but the 35-year-old refused to give up his moment in the limelight.Unfortunately for Burstein, his former colleagues showed no mercy.Itai Shechter put Tel Aviv 1-0 up with just three minutes on the clock, latching on to a Gili Vermut header. And by the 10th minute the Premier League side was already two goals to the good after Shai Abutbul’s long range effort eluded the entire Jaffa defense.When Burstein brought Bojan Vrucina down in the box on the half-hourmark, the Croatian striker made no mistake from the penalty spot andthe game was all but over.Eran Zehavi made it 4-0 five minutes before half time and Shechterscored his second of the night eight minutes into the second half tocomplete the rout.Burstein was booed by the Hapoel fans after the game and, althoughassistant coach Yossi Abuksis would not say that the goalkeeper willdefinitely not be returning to work at Hapoel Tel Aviv, he was firm inhis condemnation.“Someone who works on our staff cannot play against us. It was thewrong decision to make,” said Abuksis, who also plays for Jaffa in hisspare time.Burstein was unrepentant, saying that he felt it was worth it to play for his team.
Advertisement
Subscribe for our daily newsletter