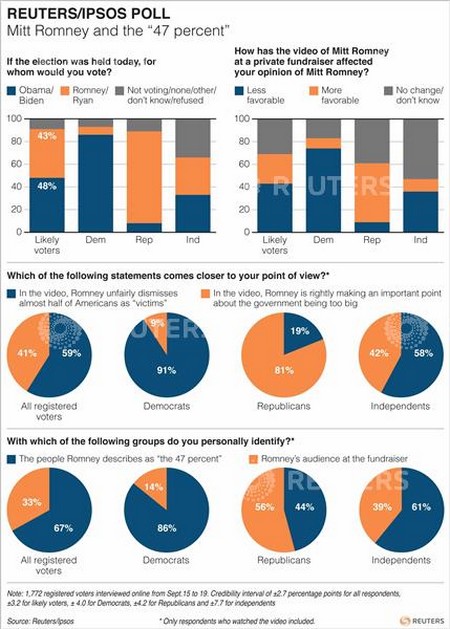 In a reversal of Tuesday's results, Romney led Obama among likely voters by 47 percent to 46 percent, a statistically insignificant margin, in the four-day online tracking poll.Romney held a wider lead among independent voter s, who will be crucial to winning on Election Day. Thirty-seven percent of them s aid they would pick the Republican if elections were held today and 31 percent chose Obama.Obama, however, had a lead of 53 percent to 42 percent among the 17 percent of the surveyed registered voters who said they had already cast their vote.

Click here for special JPost coverageLike many other polls, the rolling Reuters/Ipsos poll has shown a tight race since shortly after the two candidates met for their first debate on October 3. The two met for their third and last debate on Monday and most surveyed voters said the face-off did not change their view of either candidate.The accuracy of Reuters/Ipsos online polls are measured using a credibility interval. The credibility interval on the survey of 1,222 likely voters is 3.2 percentage points and 2.8 percentage points for the 1,621 registered voters.
Advertisement
Subscribe for our daily newsletter