Off the Beaten Track: A better place

A glimpse into the future is only a test-drive away.

By JOE YUDIN
Electric Car
(photo credit: Joe Yudin)
Advertisement
You see them more and more in Israel. The family sedans made by the French automaker, Renault. The ones that I see are usually white with blue stenciling adorning the doors of the car, announcing “100% electric”. I point it out to the family of tourists that I am driving around in my diesel-guzzling Mercedes van. I say, “this is the future of the automotive industry.” The family’s patriarch disagrees.“Electric?” he says, “I’ll never buy an electric car.”“Why not?” I reply.“Many reasons” he states, “first and foremost the cars have no ‘umph.’ Secondly, the driving range is terrible and you can only drive a few miles before you have to recharge for 12 straight hours. It’s just not practical.”“I disagree. I’ve driven these cars and the acceleration is much better than the same cars in their class (similar to a Honda Accord), plus the company that sells these cars, Better Place, will install special charging stations at your home and work place. Plus if you drive anywhere out of the range of the charger, there are battery-changing stations all over the country and it actually takes less time to swap to a fully charged battery than it does to pump a full tank of gas. There are also many more important added benefits.”“What might those be?” he asked skeptically.“First off it’s clean, and once Israel switches over completely from generating electricity nationally to natural gas, solar and wind power, the pollutants even at the power stations will be minimal. Secondly, it will end our dependence on oil which supports some of the worst regimes in the world,” I respond.“That sounds like a fairytale too.” He said with a smirk.“You know what, we are close to the Better Place visitor’s center would you like to drive one of the cars around their track? It’s free. All you need to do is show a valid driver’s license from anywhere in the world.”“I’m game” he said. 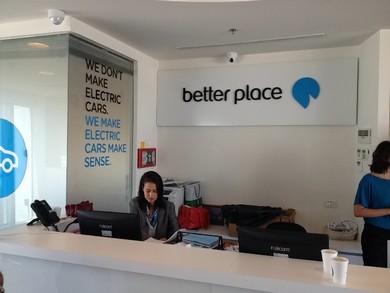 Joe Yudin
And with that we were off to the Better Place visitor’s center. Located in an old, giant oil storage cylinder, the Better Place visitor’s center stands out in the industrial complex just outside Tel Aviv at Pi Glilot. It is encircled by a track and Israelis and tourists alike are taken in sets of three into the eerily silent cars for test drives. Every parking spot in the lot has a pillar with a protruding coiled cord; some being used to charge the fine looking Renault-made sedans. Inside there are salespeople selling cars to Israelis who seem to be more than curious about the 100% electric cars with switchable batteries. The cars proudly have their hoods popped showing off their engines and batteries. 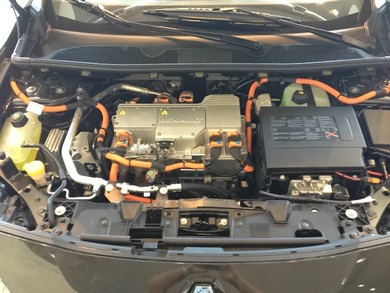 Joe Yudin
There is even a stripped down version of the car with all of the parts labeled. We present our drivers licenses and are soon ushered into a movie theater made up of retro car seats. Several futuristic movie screens inundate us with messages and images from all sides as Better Place CEO, Shai Agassi personally walks us through the process of founding the company, his vision, why the car is practical and how it will change the world. Another cool detail, Agassi explains, is that with a touch of one button the car calls Better Place, where someone can route you to the nearest charging station and have a cup of coffee delivered directly to you as the automated battery switching station is doing its thing during your four and a half minute wait. 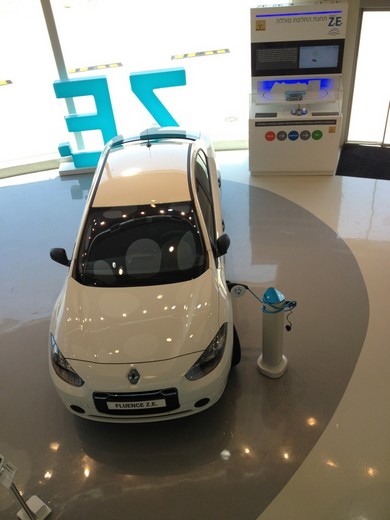 Joe Yudin
After the movie we are all pretty excited. “Well what do you think so far?” I ask my tourist.“Sounds incredible” he said with a smirk. “Let’s see how the thing drives.”Our guide takes us outside, and we hop into the car. The guide tells Mr. Cohen from New York to press the ‘ON’ button. A light turns from red to green. No noise. “It’s on” he says. “Drive.” He puts it into gear, floors it and we are well on the way to changing the world.Joe Yudin owns Touring Israel, a company that specializes in “Lifestyle” tours of Israel.Joe Yudin became a licensed tour guide in 1999. He completed his Master’s degree at the University of Haifa in the Land  of Israel Studies and is currently studying toward a PhD.