Off the Beaten Track: Armageddon in the North

Continuous archaeological digs taking place at Megiddo every year has changed the way we look at entire history of Israel.

By JOE YUDIN
OCTOBER 18, 2012 15:24
Megiddo Israelite Gate 370
(photo credit: Joe Yudin)
Advertisement
Joe Yudin owns Touring Israel, a company that specializes in “Lifestyle” tours of Israel.Joe Yudin became a licensed tour guide in 1999. He completed his Master’s degree at the University of Haifa in the Land  of Israel Studies and is currently studying toward a PhD.Tel Megiddo is not off the beaten path, as a matter of fact it’s right smack in the middle of the ancient superhighway, the Via Maris. However the continuous archaeological dig taking place there every year has changed the way that we look not only at Megiddo itself, but also at the entire history of the Land of Israel.Tel Megiddo is also a central part to the debate between several schools of archaeology and science i.e. between “biblical archaeology” vs. “revisionist archaeology” and between “low “and traditional chronology. It is mired in controversy, but the dig there is one of the oldest archaeological sites in the world and the treasures that are being found there to this day only add to our rich historical insight into our collective biblical heritage. The new finds and renovations make this site a must see every couple of years.I had the honor and the pleasure several years ago to be led through this UNESCO World Heritage site by one of the two Israeli directors of the site, Israel Finkelstein. Finkelstein is famous for his so called “minimalist” views, his “low chronology” dating and as a major critic of the Biblical narrative. 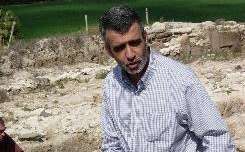 I found him to be extremely informative, insightful and non rejectionist. He didn’t appear to me to have an agenda and truly seemed to be a student of history man whose process is to examine and reflect, and only after taking into account different perspectives to write about his findings.The new insights into the site are fascinating. The site is well signed, refurbished and highly accessible. I suggest doing a bit of reading about the controversy and the site will give you invaluable insights during your visit.The most intriguing argument between various scholars and archaeologists is the debate as to who built the grandiose buildings during the Israelite period at Megiddo. Was it during the reign of King Solomon as the Bible suggests and backed by famous Hebrew University Israeli archaeologist Yigal Yadin from his digs there in the 1960’s and 70’s, or is Tel Aviv University professor Finkelstein and his low chronology more accurate attributing this level to Kings Omri, Ahab and Jeroboam II? Professor Finkelstein does not dispute the existence of Israelites in the 13th and 12th centuries BCE, just the magnitude of their empire and his finds at Tel Megiddo, he claims, prove this view. 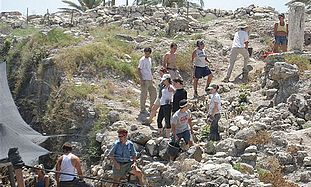 From Tel Aviv or Jerusalem take Highway 6 north to the Iron Exit and then take Route 65 north east through Wadi Ara to Megiddo Junction. Turn left and after a kilometer you will see the huge tel which is level upon level of destroyed civilizations amassing into what looks like a trapezoidal shaped hill.
Take the first left after the tel and an immediate left up the tel to the entrance of the nation park.Inside the visitor’s center there is a great (albeit dated) movie about Megiddo, its place in history and what it means to both Jews and Christians. On the opposite side of the building is a fabulous, informative series of displays (also quite dated) outlining how Megiddo was an important strategic center exactly at the crossroads of Asia, Africa and Europe from before the Canaanite period and through the Roman period and even to this day.Its history is 7,000 years old and boasts 24, maybe now 25, different strata of civilizations. During the biblical narrative Megiddo was almost always influenced or conquered by Egyptian or Mesopotamian forces throughout its long history.Its history reads like a who’s who of the ancient world. Pharaoh Thutmose III fought a battle there in the 15th century BCE capturing all of Canaan, Deborah and her general Barak defeated the Sisera and his army there. Sisera was ambushed by Yael and lost his life at the end of the battle. Josiah, the righteous king and descendant of David was killed there in battle with Pharaoh Neco II, sparking the messianic connection to Megiddo for Jews and Christians alike. 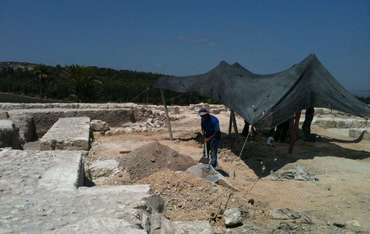 From the visitor’s center walk up the hill and check out the Canaanite stairs and gate. Walk on the ancient road to the Israelite gates and walls which are attributed to Solomon in the Bible. From there go up and left and see the stables and palaces previously believed to be Solomon’s handiwork, but was most probably the work of Ahab or even Jeroboam II.See the great cut to the right, dug out in a dig by the University of Chicago in the 20’s and 30’s when the science was still in its infancy. At the bottom of the pit you can make out a round Canaanite altar and temples where they made their sacrifices. The view from beyond the palace of the Jezereel Valley, called the Valley of Armageddon by evangelical Christians, is truly one of the best views in all of Israel. A good guide can point out what would seem like half the Hebrew Bible while standing at this point. Christians can imagine from here what the end time will look like by reading the book of chapter 16 of the Revelations from here.Make your way to the other side of the divide and check out the interesting mason marks on some large cut stones that have only been found at one other place in Israel: Tel Jezreel, built by King Ahab. Check out the stables and place on this side of the site and notice the Assyrian homes built after the destruction by Senaccreib in 732 BCE. See the wheat silo and then on the far side of that the water system built by some enterprising Canaanites to defend the city’s water supply. Walk down into the dark tunnel come out the other side and start your ten-minute walk back up to the visitor’s center.Joe Yudin owns Touring Israel, a company that specializes in “Lifestyle” tours of Israel.Joe Yudin became a licensed tour guide in 1999. He completed his Master’s degree at the University of Haifa in the Land  of Israel Studies and is currently studying toward a PhD.Follow @JPost_Lifestyle
Advertisement
Subscribe for our daily newsletter