By JOE YUDIN
Nahal Gilabon 4 465
(photo credit: Yoni Cohen)
Advertisement
Joe Yudin owns Touring Israel, a company that specializes in “Lifestyle” tours of Israel.There is no better place in Israel to mix a day of hiking in beautiful natural surroundings while visiting incredible ancient and modern historical sites than on the Golan Heights. An eclectic blend of places can always be worked into an itinerary, from wine tasting, to exploring a 2,000 year old city or a battle site, the Golan Heights has it all. In the summer months, which are usually brutally hot, it is always a good idea to include an easy or even a rigorous hike in or around the Golan’s many springs or streams to which you can take a refreshing dip and relax along the way. A favorite hike among Israelis, albeit a bit off the beaten path for the average tourist, is the hike through Nahal Gilabon (pronounced Jilla-boon).Driving northeast on Route 91, cross the Jordan River on the “Benot Yaakov” (Daughters of Jacob) Bridge, the “Beit HaMeches” (Tax House) and pass Nashut Junction. A couple of miles up the road you will see a brown sign pointing to your left (west) stating “Nahal Gilboan Nature Reserve”. Take a left and carefully follow this gravel road on the red trail marker to a parking lot. Beware of serious pot holes! While driving notice the destroyed Syrian village of Aweinat el-Jenobiya and at the parking lot the village of Aweinat es-Samalya. These villages were probably settled in the 18th and 19th centuries by Bedouin. Notice the concrete buildings, bunkers, trenches and pillboxes built by the Syrian military in preparation for war against Israel. They also planted clumps of eucalyptus trees around their installations in order to camouflage themselves and provide shade for their soldiers. Also notice the many fenced-off Syrian minefields with their yellow signs and red triangles warning of the danger. Stay on the marked trails only! It is no surprise that the villagers abandoned this military base/village during the heavy fighting of the Six Day War in 1967. After the war the Israelis razed the buildings.After lathering up with sunscreen, putting on your hats, bathing suiting, water shoes and packing lunch and lots of water, follow the red trail through the village and down into the Gilabon stream. Keep an eye out for myrtle, sabras (prickly pears), squill and fennel. The aromatic myrtle plant is one of the four species of plants used during the festival of Sukkot. A common nickname for native born Israelis is “Sabra” named after the prickly pear fruit because it is course on the outside and sweet on the inside, and due to its prickly exterior if you don’t treat it carefully and with respect while trying to get to the sweet interior, you are bound to get hurt. Cut the ripe fruit off the cactus with a knife and roll it around in the mud, without using your bare hands of course, before slicing off the sides. You can eat the fruit with the seeds or spit them out. 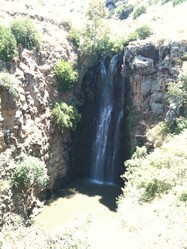 Photo: Joe Yudin
Cross the river and you will immediately hear the rush of the Devorah Waterfall. Take a look down the cliff but don’t get too close to the abyss. Later you can go for a swim underneath this powerful force of nature, but in the meantime follow the red trail to the blue trail and make your way up the hill among the destroyed Syrian military installations and to the remnants of the ancient Jewish village of Dabura to which the previously seen waterfall received its name. Bedouin Arabs had settled here in the 18th or 19th century. The famous American-German “Templer” archaeologist, Gottlieb Schumacher, did a survey here in 1885 and reported that the Arabs had abandoned their village but had built their homes out of the ruins of an earlier Jewish village. In the twentieth century, the Syrian military built an army base here also reusing the volcanic basalt stones of the Roman-Byzantine village with added concrete. The most important archaeological find here, which is now in the Golan Archaeological Museum in Katzrin just four kilometers away, is the Aramaic inscription identifying the yeshiva (academy) of Rabbi Eliezar HaKappar who is mentioned in the Talmud. The discussion in the Talmud relates what one may carry and wear on Shabbat while making the journey from Katzrin to this rabbi’s yeshiva. There are many other carvings and engravings scattered about the ruined village. The best example is just off the trail on the left, by the nature reserve sign. From this courtyard enter the large building with many doorways. Between two doorways is a carving of an eagle with a snake in its mouth. 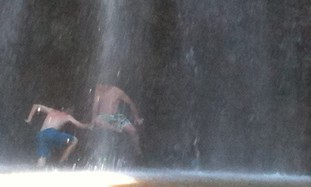 Photo: Joe Yudin
Make your way back down the blue trail to the red trail and down around to the Devorah Falls. Be careful when climbing down into the pools. If you are allergic to bees you should probably skip this pool, and go straight to the next one. Usually if you leave them alone they leave you alone. Wild pink and white oleander dot the sides of the pools. They look and smell beautiful, but don’t pick them for the sap is poisonous. Generally speaking, most wildflowers are protected in Israel so please don’t pick the flowers. Continue down the stream bed. There are points along the trail where you can actually hike through the water. Eventually you will get to Israel’s second largest continuously flowing waterfall at about forty meters high. The views of the Gilabon Falls while hiking down to them are breathtaking and are worth a few stops for pictures along the way. Please be careful when approaching the cliffs while checking out the falls.Once at the pool relax, delve into the cool waters and see if you can make your way behind the falls. There is a small cave their where you can look through the falls back at the pool. This is one of the most beautiful spots in all Israel and a great place for a picnic. Remember to leave nothing but tracks! When you are ready to go, retrace your steps on the red trail, but do not continue up the adjacent slope as the red trail continues west to an old Syrian officers pool way down the trail. Return the same way you came until you get to the blue trail heading up the hill and to the ice-cream lady. After a cold drink or snack continue about a kilometer and a half down the blue trail on the gravel road to the red trail gravel road and go left back to your car. Hope you had as much fun as I did.Joe Yudin became a licensed tour guide in 1999. He completed his Master’s degree at the University of Haifa in the Land of Israel Studies and is currently studying toward a PhD.