Off the Beaten Track: Flowing with milk and honey

Shavuot is a great time to celebrate the farmlands of the country.

By JOE YUDIN
MAY 24, 2012 14:34
Jezreel valley
(photo credit: Joe Yudin)
Advertisement
Joe Yudin owns Touring Israel, a company that specializes in “Lifestyle” tours of Israel. It’s almost Shavuot- the Festival of the Harvest and the Festival of the Giving of the Torah. My children come home from school every day with a different story to tell me about this wonderful Jewish and Israeli holiday. My ten year old Geffen comes home from school with a sour puss so I ask her what's wrong.“I have to read the entire Scroll of Ruth for homework!” she sighs.“It’s a wonderful story!” I reply, and I notice while driving by the Tanachim Moshavim in the Jezreel Valley that the tractors are stacking the straw bales in the fields, the workers are tending to the beautiful yellow-green sunflowers, fragrant garlic fields, and acres upon acres of tall green corn while Arab villagers are gleaning the fallen wheat and the forgotten garlic behind the reapers. 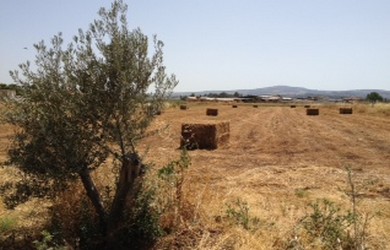 “No it’s stupid! Stupid Ruth marries another man after her husband dies! That’s when I stopped reading it”, she says.I suggested that we read it together and while driving to the pool on the other side of the valley, she reads aloud while I drive through this most ancient, fertile farmland. 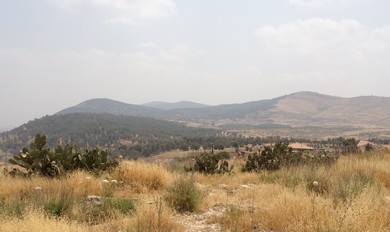 In the first chapter Ruth’s sons die and apparently there is a drought in Moab where they reside across the Jordan River. I look up and out of the front of my jeep while driving on road 675 east and there they are - the Mountains of Moab. Naomi decides to go back to Judah, a long and difficult journey for an old woman, and Ruth decides not to abandon her. “'Entreat me not to leave thee, and to return from following after thee; for whither thou goest, I will go; and where thou lodgest, I will lodge; thy people shall be my people, and thy God my God; where thou diest, will I die, and there will I be buried;” (Ruth 1:16-7).The rest of the story has Naomi back in Judah near Bethlehem sending Ruth out to “glean in the field after the reapers; and her hap was to light on the portion of the field”. Boaz then takes a liking to her finding out that Ruth had taken care of Naomi on her journey and that Naomi and Boaz are family. Boaz has his farm hands throw extra barley Ruth’s way and Naomi sends Ruth back to Boaz the next day with strict instructions to pamper him with food and drink after a long day’s work but “to lay at his feet” afterwards. In the morning Boaz declared to the entire city that Ruth was now his wife and she bore a son with Boaz called Obed, who would become the grandfather of David, King of Israel. 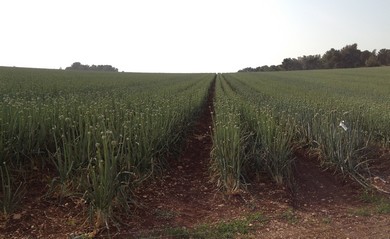 On the drive back my daughter seems to be lost in thought, looking at the farmers, the white boxes that are bee hives that dot the edges of the fields, the cattle, goats and sheep grazing, and on the way home we climb Mount Gilboa with its commanding view over the valley where David replaces Saul as King of Israel.We pull into the driveway and the door flings open and my five year old son leaps into my arms. “Daddy we learned a new song in kindergarten. Want to hear?” he exclaims.He begins to sing, “Eretz zavat Halav” (land flowing with milk) he claps twice and then continues, “Halav u Dvash” (milk and honey). I smile and tell him that yes, this certainly is a land flowing with milk and honey.There is no better place to celebrate Shavuot than in the farmlands of Israel. Check out a Kibbutz or Moshav celebration this weekend, or some great hikes through the farmland at Mount Eitan and the Sataf Springs, Tel Yizrael to the Spring of Yizrael or perhaps one of the many, boutique dairy farms that are scattered throughout our beautiful country.Joe Yudin became a licensed tour guide in 1999. He completed his Master’s degree at the University of Haifa in the Land  of Israel Studies and is currently studying toward a PhD.Follow @JPost_Lifestyle