Off the Beaten Track: Golan in all its glory

Wild flowers this time of year are multicolored and abundant all along the trails and mountainsides.

By JOE YUDIN
Golan Heights 370
(photo credit: Joe Yudin)
Advertisement
Joe Yudin owns Touring Israel, a company that specializes in “Lifestyle” tours of Israel.“So you only have one day in the Golan. What would you like to do?” I recently asked a group of tourists from America that I was guiding.“We heard that the hiking in the Golan is very special and challenging, so let’s hike, but keep in mind we like great views, wildflowers, wildlife and we would also like to see an ancient city if possible. Oh, and we heard that there are some great swimming holes on the Golan as well. Oh, and we want to see a battle site. Oh, and we want to try some of the famous Golan wine we heard about as well.”“Basically you want to see everything then in one shot?” I said.“I guess so? Are we forgetting anything? What would you recommend?” they asked.Well, it took some planning but I think I came up with a plan to see the Golan in all its glory with the right balance of the things that they wanted to see.Drive to Kibbutz Ein Gev on the eastern shore of Lake Kinneret. Just opposite the main entrance to the kibbutz is a great steakhouse called Marinado. Park there and don’t forget the Golan Hikes trail map (number 1) and please take note of the marked mine fields. If you do the full hike you will have to leave another car at Kibbutz Afik above you, if not there is a loop option. Find the black marked jeep trail behind the restaurant.  Follow the black marked trail through the kibbutz’s fields and up the mountain. After about a kilometer it starts to get steep but everyone in decent health can make this climb. After about a kilometer you get to a majestic overlook of the Jordan River Valley, Tiberias and the mountains of the Galilee. The wild flowers this time of year are multicolored and abundant all along the trails and mountainsides. Keep an eye out for porcupines, wild boar, foxes, wolves, gazelles and jackals. After a few switchbacks you will notice a small concrete hut with a cable strung from it going down the valley and up the mountain. This was built by order of Lt. Col. David Laskov of the IDF just after the War of Independence in 1949 in order to move materials and ammunition up the mountain and build an outpost on the border with Syria. The outpost was completed under heavy fire in 1951. Check out the many trenches and fortifications along the road. This was the frontier, a very hot one, up until the end of the Six Day War in 1967. The Syrians had the high ground and the valleys all around and would fire at the outpost and the kibbutz below almost every day until the conquest of the Golan. Follow the road up to the old outpost which is now used by archaeologists digging at Susita to store their equipment. In the outpost on its western edge next to two olive trees is a monument to base commander Rami Zaid who was killed here by a Syrian sniper and was the last casualty before the Six Day War. 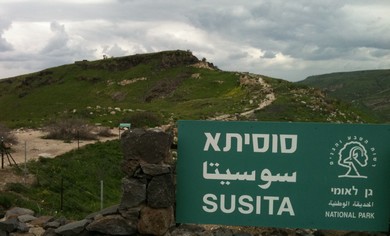 The road turns into a black marked trail and you will soon see the ancient ruins. The city of Susita - or Hippos in Greek - was founded around 200 BCE by the Syrian-Greeks after they had conquered the Land of Israel from the Egyptian-Greeks. They named the city Antiochia-Hippos apparently after their king. After Herod’s conquest of Judea and the later Roman period, Hippos became one of the ten Roman cities of the east, known as the Decapolis, which were centers of Hellenistic culture in the midst of the predominantly Semitic Middle East. By the fourth century CE Hippos had become a mostly Christian city, albeit with a heavy Hellenistic influence, and the ruins of at least seven churches from the Byzantine era can be found throughout the tel (an artificial hill built on layer upon layer of destroyed civilizations). Explore this incredible Greek-Roman-Byzantine city which is in the midst of excavations. The main street, the “Decamanus Maximus” which ran east-west runs through the city and you can walk along it while checking out the ruins of the churches and Hellenistic forum off to the sides. In the central forum there are the ruins to a pagan temple which predates the Byzantine period by about 100 years. Check out the walls, fortifications, pillars, capitals and other ruins lying about. The city was destroyed by an earthquake in 749 CE and was never rebuilt.Follow the path through the city and down the eastern side to the main parking lot. From here you can turn right and head down the old military road back to Kibbutz. For those who are more adventurous, turn left onto the road and follow it two kilometers to where it starts to bend to the left at the end of an almond orchard below you. Take the unmarked dirt road through the orchard to another dirt road along a barbed wire fence opposite Tel Soreg. 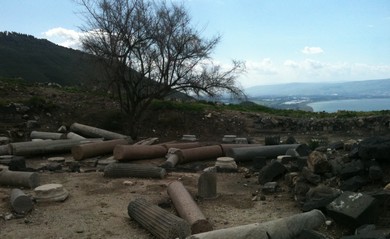 Follow this dirt road northeast to the end of the tel and then you will need to open the fence along the dirt road, cross through some brush, close the fence (be wary of the barbed wire), and make your way to the upper dirt road below the tel. Make sure to use your map while doing this. Follow this road through an ancient olive grove. Notice the size of the tree trunks and how they are hollow inside. The more hollow an olive tree the older it is. Midway through the orchard, continue due east along an unmarked trail. This trail will take you up to a fabulous overlook of the Galilee and Lake Kinneret from Kibbutz Afik. There are benches here on which you can rest and enjoy the view. This is a perfect place to break out the wine and cheese. There are some great local Golan wines, one of my favorites is the boutique winery Chateau Golan. From there you can follow the trail down to the Spring Afik in the midst of the thick forest and enjoy a dip in the crystal clear waters, then back up to the kibbutz to your parked car.Joe Yudin became a licensed tour guide in 1999. He completed his Master’s degree at the University of Haifa in the Land of Israel Studies and is currently studying toward a PhD.Follow @JPost_Lifestyle