By JOE YUDIN
Jezreel valley hike 311
(photo credit: Joe Yudin)
Advertisement
Joe Yudin owns Touring Israel, a company that specializes in “Lifestyle” tours of Israel.The drive north along Route 2 from Tel Aviv is an interesting one. When you get past Herzeliya and Netanya on the Coastal Highway there are spurts along the coast with pristine beaches, agricultural fields and untouched open spaces, albeit with cranes scattered about along the horizon, and high-rise apartments climbing skyward rather quickly, changing the landscape forever. You already get the feeling that you are not in the city anymore, although urban sprawl is well underway. Once you turn off to Route 65 north-east near the giant, coal burning, pollution spewing, chimneys of the Rabin Power Station, you pass by several kibbutzim which seem less agricultural and more like giant shopping malls, surrounded by fields and factories. Ascending up Wadi Ara through the hills of Samaria & Menashe the tight urban feeling returns passing through several densely populated Israeli-Arab cities which were once pastoral, agricultural villages not too long ago, and now boast some beautiful, some monstrous three story single family homes almost on top of each other. Their mansions rise on both sides of the highway, and the traffic thickens as the cities grow and the traffic lights remain. If any part of the country’s highway systems needs a couple of overpasses, its Wadi Ara. Twisting up the hills and through the wadi one thinks they will never get to the “countryside” until the last hill has been climbed, and the Jezreel Valley reveals itself.The Jezreel Valley incorporates pristine natural hills, springs and streams interspersed with farmland, pastoral villages and sleepy towns just an hour from Tel Aviv and a half an hour from Haifa. It boasts world renowned archaeological sites like Tel Megiddo, Beit Shean and Beit Shearim, as well as natural treasures like Nahal Kibbutzim, Mayan Harod and the Sachne. It is surrounded by the mountains Gilboa, Givat HaMoreh, Tabor, Carmel and the Galilean & Samarian ridgelines. The kibbutzim and moshavim offer beautiful, peaceful cabins and B&Bs with horseback riding and off road vehicle tours. It is Israel’s breadbasket and one of Europe’s main sources of flowers, wheat and cotton. Flights and glider rides can be arranged at Megiddo Airstrip as well as hot air balloon trips at dawn. All of this is in danger of disappearing if the plans for Ben Gurion Airport II gets approval and this tiny airstrip becomes an international airport. Trains, planes and trucks will crisscross the valley and the cranes that we witnessed along the coast and in Wadi Ara will move north to one of Israel’s last outposts of tranquility that isn’t in the desert. Go get a glimpse of it now because you will want to tell your grandchildren about it one day. Tel Aviv isn’t the only place being developed just for the benefit of wealthy people. 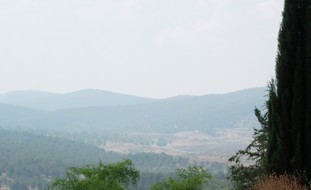 Photo: Joe YudinAfter exiting Wadi Ara on Route 65, pass Megiddo Junction and continue east on Route 65 to the next Junction and take a right. You will pass the “Tanachim” Moshavim which are agricultural communities settled by North African refugees in the early 1960’s as the French pulled out of their colonies and the Jews had to flee for their lives with nothing but the shirts on their backs. Here you can still find whole communities speaking their native dialects of Tunisian-French, Moroccan-Arabic and even pockets of Kurdish-Aramaic. If you are lucky enough to know a family who lives here, I urge you to spend a weekend here and experience the food & culture of these communities before they completely assimilate forever. I’m telling you, you haven’t had couscous or kubbot unless you’ve eaten at someone’s house at Moshav Nir Yafe or Moshav Parazon. These families should open restaurants.Continue about 9 kilometers on this road (Route 675), pass Yizrael Junction and then turn left at Kibbutz Yizrael and turn right quickly to Tel Yizrael. Park in the lot and have a fantastic snack under the large tree where a Druze family will bake you a Druze pita on the spot and grease it up with your choice of chocolate, labene or humus with a side of olives. 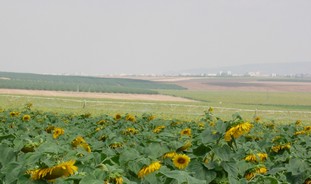 Photo: Joe YudinThis valley is named after the ancient city of Jezreel, which sits on the high ground on the ancient road between Megiddo and Beit Shean, which linked all three main highways between ancient Egypt and Mesopotamia. A spring lies a kilometer below the tel in what is today a eucalyptus grove. Archaeologists have excavated the tel and have found the remains of a large iron age, Israelite fortress almost 15 acres in area, surrounded by a dry moat. On the opposite side of the parking lot you will see a sign mapping out this area. Pass the War of Independence war memorial to the Palmach soldiers and you will notice ancient remains protruding from the mound. You will also see various water cisterns, ruins, a church and even a tiled wine press from Roman, Byzantine, Crusader and Arab periods if you explore a little. The views of the Jezreel Valley from this trail are breathtaking. You can recount the stories of Deborah, Gideon and Saul all from this viewpoint and signs quoting the various stories from this period are posted all along the way. Where the green trail intersects the blue trail you can see Navot Junction past the eucalyptus grove where the trail leads to a beautiful pool and spring. Behind you lays the city probably built by the Israelite King Ahab and his wife Jezebel in the ninth century B.C.E.We find the story of Ahab, Jezebel and Navot in the First Book of Kings, chapter 21:And it came to pass after these things, that Navot the Jezreelite had a vineyard, which was in Jezreel, hard by the palace of Ahab, king of Samaria.  And Ahab spoke unto Naboth, saying: 'Give me thy vineyard, that I may have it for a garden of herbs, because it is near unto my house; and I will give thee for it a better vineyard than it; or, if it seem good to thee, I will give thee the worth of it in money.' Well Navot wasn’t selling. He wanted to leave the fields, probably the most fertile in all the Land of Israel, to his sons. This was enough for Ahab, but not for his foreign wife Jezebel who worshiped the gods of Baal. She spread rumors about Navot and his sons, leading to their execution without an honorable burial. Elijah the Prophet was not a happy camper. He went down to Navot’s fields where Jezebel and Ahab had taken possession for their gardens, cursing them both, leading to Ahab’s death and a curse on his house resulting in decades of war and famine on all of Israel. Eventually, Jezebel’s evil ways caught up with her. The people of Jezreel stormed the palace, and she knew that her time had come. She sat at her window here overlooking the gardens below and slowly “painted her eyes, and attired her head” before being thrown from the window meeting the same fate as Navot and his sons.
Follow the red trial to the spring in the eucalyptus grove. Relax, go for a dip, have a picnic. Explore the water system with water shoes and flashlights. The water here is crystal clear and the kids will love splashing around. If you haven’t left another vehicle here, return back up the trail to your car.Joe Yudin became a licensed tour guide in 1999. He completed his Master’s degree at the University of Haifa in the Land of Israel Studies and is currently studying toward a PhD.
Advertisement
Subscribe for our daily newsletter