Off the Beaten Track: Masada at dawn

We arrive before first light. When we get out of the dusty jeep we expect a coolness as in the night mountain air of Jerusalem, but that isn’t the case down here. It’s warm and will eventually become scorching hot not long after sunrise. The mountain can barely be made out in the thick darkness but it’s there looming over the Dead Sea at the heart of the Judean Desert. I wonder how those Jewish warriors felt the first time they saw this mountain 2,000 years ago.We fill our bottles with water, and set out on the trail up the mountain path that I know is there but I cannot see. The tourists from Manhattan follow me blindly into the darkness, just as some 970 Jews followed their rebel leader, Elizar Ben Yair up the mountain to their eventual death. You would think that I would get sick of this place. After all, every tourist that comes to Israel makes this pilgrimage. Every time I come here and tell the story, and see the reaction of my various groups I am always pleased. No matter who comes here,  whether it is Jews, Christians or atheists, everyone is moved to tears, or should be if the story is told correctly. The story is a sad but heroic one. Did these people make the right choice? Are they worthy of this immortalization? We shall see. 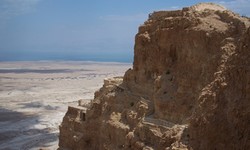 MasadaI gaze up at the stars for the thousandth time and gape as I feel I have never seen so many. At first light we climb over a small hill and down into a wadi, then reach the base of the mountain after an initial ten to fifteen minute walk and the horizon begins to faintly color itself. The twinkling stars to the east start to give way to a deep orange-purple hue and the huge blood red moon seems to contract and tone down its volume. The dawn belongs to the sun. I stop to take in the scene and silently stare at the horizon. I hope my tourists are doing the same. I wonder what those Jewish warriors were thinking when they saw this sunrise time and time again as the Romans were building their camps and laying the siege that would mean their end. We climb the mountain in spurts, stopping briefly at times to catch our breath, swig some water and witness the slow, molasses like change of the heavens from black to an evolving canvass only Van Gogh could paint. We gaze, think, breath and ponder, but we do not speak. The beauty is overwhelming. By the time we make it up two-thirds of the mountain we observe a little yellow mixed in with the blurred orange-red. Here Comes the Sun is playing in the back of my mind. I guess there is a Beatles song for every occasion.

SunriseThere is something that bonds fellow Jews while hiking to the top of Masada at dawn, where 965 Jews took their own lives rather than succumbing to the Romans and a life of slavery.  It’s a shared experience even though most of the hike up is a silent one. By this time in the tourist’s trip they have experienced two thousand years of Jewish history in the setting to which it all happened. These tourists are getting it. I see it in their eyes. Their minds are racing, their emotions are flowing their bodies are convulsing. We climb and wind along the ancient snake path and get to the toughest part. We are winded, wobbly kneed, we make out what seems to be some caves over the cliff side. The darkness seems to lift as we get to the top of the ancient mountain fortress. "Follow me,” I say without stopping. We enter the casemate walls through the main gate and walk a slow path, on a gentle slope, we pass the Israeli flag whipping overhead in the breeze and climb the last stairs to the top of a Roman bathhouse and sit down. Our emotions are racing. We rest for five minutes, eating a snack, drinking a bit but mostly just watching the giant ball of fire rise over the Edomite Mountains, reflecting off the Dead Sea and announcing to the world that, yes, the flag of Israel is still blowing atop of King Herod’s desert fortress of Masada. Mr. Cohen from New York looks into his son’s eyes and smiles without saying one word he speaks thousands. For me this is the greatest part of my job.Joe Yudin became a licensed tour guide in 1999. He completed his Master’s degree at the University of Haifa in the Land of Israel Studies and is currently studying toward a PhD.
Advertisement
Subscribe for our daily newsletter