Off the Beaten Track: Mount Tavor

Travel expert Joe Yudin introduces "the road less travelled"; There is no better time to hike in Israel than in March.

By JOE YUDIN
Mount Tavor 370
(photo credit: Joe Yudin)
Advertisement
Joe Yudin owns Touring Israel, a company that specializes in “Lifestyle” tours of Israel.For the past two weeks I have crisscrossed the country, from Eilat to the Hermon with three American tourists in their sixties who love to hike the Land of Israel. About ten years ago they came on their very first trip here to do the typical tourists stops and when one of them mentioned that they loved to hike, I immediately threw the jeep into four-wheel drive, made a beeline to the nearest dirt road, stumbled upon the first trail marker in the area, parked and then began to climb Mount Carmel. These tourists have been back almost every year thereafter to hit the trails for two weeks of hiking with a day off in between at some of the spectacular spa resorts that we have here in Israel.This time the weather wasn’t so cooperative so we had to hike through cold rain, snow, mud, fierce winds and even a sandstorm. But when the sun finally broke through, so did the great springtime beauty of the area and when we had dinner together on the very last day in Tel Aviv as the city was gearing up for Purim, they all agreed that the weather indeed made this the most memorable trip of all.“So what was your favorite hike?” I asked over a fabulous meal at Goocha on the corner of Dizengoff and Ben Gurion streets. One at a time they responded how the “Little Makhtesh” in the Negev was so unique and beautiful as well as challenging due to its tough climb out. Another mentioned our hike from Kibbutz Ein Gev on Lake Kinneret up the Golan Heights through the ancient Hellenistic city of Sussita, overlooking  valleys and snow peaked mountains during sporadic rain showers. The hike from Tel Avdat to Ein Akev and down the Divshon Ascent presented an interesting dimension when a sandstorm suddenly kicked up and we couldn’t see for more than 10 centimeters in front of us. 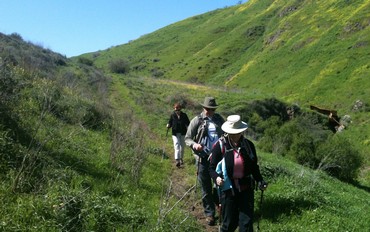 They all agreed, however, that our hike in the lower Galilee after the rains had ceased, with sunny skies and 68 degree weather was the absolute best. There is no better time to hike in Israel than in March.For this five-hour loop trail hike bring water, hats, sunscreen, trail map number three and a bathing suit if the weather is warm enough. Take Route 65 northeast through Afula and into the Lower Galilee. Turn right at Gazit Junction in the shadow of Mount Tavor. Pass Kfar Kisch, Kibbutz Ein Dor, Kfar Metzer and the turn left into Kibbutz Gazit. Park in the lot next to the Kibbutz secretary’s office and walk east, down the hill, past the factory, leaving the kibbutz on an unmarked trail. You will come to a blue marked jeep trail that turns into a trail for hikers only and descends into a tributary of Nahal Tavor (the Tabor Stream Valley) heading east. Keep an eye out for herds of Gazelles as they are known to roam the area.As you descend into the valley, the Kibbutz will be off to your left and above you. This trail will take you into the stream bed while passing Hawthorne and Jujubee trees, a spring feeding the stream, layered geological features of chalk and basalt stone as well as green fields and many species of colorful wildflowers. During several parts of this hike you will have to cross over the stream and back again. In most places you can try your balancing act hopping from stone to stone in the stream, or you can walk through the water. After about two kilometers you will get to the junction of the red trail which is a jeep trail. For those of you with a jeep you can start on this trail on the road to Kfar Kisch and take it all the way down Nahal Tavor to Gesher in the Jordan Valley. Take more than one jeep as it is a bit challenging and one jeep may have to pull the other out of a bind here and there. 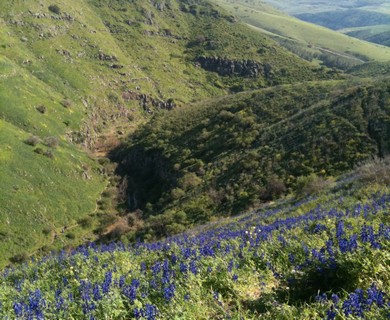 At this junction there are many trees, picnic tables and beautiful shaded areas along the stream. It's the perfect place for a dip, lunch or coffee break. There are several springs down the red trail which add a lot of water to the stream before it empties out into the Jordan River. The next three kilometers of this hike on the blue trail are the most beautiful this time of year. The Blue Lupine is in full bloom right now and the mountains are covered with these flowers, turning the landscape purple dotted with red anemones, white garlic, and pink cyclamen among others. About half a kilometer down the trail you will come to an ancient Atlantic Terebinth tree with a square shape cut out of a huge rock beneath it. This may very well have been some kind of pagan altar. This part of the stream is called the Basalt Canyon due to the fact that you have entered a geological formation caused by an ancient volcanic eruption and made up of black, bubbly, basalt rock. After going around a beautiful bend in the trail that will take you 180 degrees through the lupine lined canyon, passing a huge, fat, palm tree and crisscrossing back and forth over the stream, you will get to a large pool, called the Red Pool, named for the red soil around you. Little waterfalls dot the area and this is a perfect place for a dip.Follow the trail out of the canyon and up the steep hill overlooking Tel Reches, Belvior Castle, Mount Tavor and the entire Lower Galilee. You can make out a small excavation on the tell just to your north and below you. This may very well be the biblical city of Anharet mentioned in the Book of Joshua as belonging to the Israelite tribe of Issachar. At the top of the hill you will come to an overlook with stone benches named for a young soldier from Kibbutz Gazit who was a paratrooper killed in battle during the Second Lebanon War. Facing the memorial take the trail to the right, on the right side of the orchard, outside the fence until you get to the red trail. To get back to your car, follow the red trail.Joe Yudin became a licensed tour guide in 1999. He completed his Master’s degree at the University of Haifa in the Land of Israel Studies and is currently studying toward a PhD.