Off the Beaten Track: The view from Belvoir

By JOE YUDIN
Belvoir 311
(photo credit: Joe Yudin)
Advertisement
Joe Yudin owns Touring Israel, a company that specializes in “Lifestyle” tours of Israel.As a boy, I was fascinated with the tales of the Knights of the Round Table and the legends of King Arthur. Some of my favorite movies were Excalibur, Robin Hood and even Monty Python’s Holy Grail. I would also love to attend the festivals of “Medieval Times” in upstate New York. When I got to Israel I was excited to check out the crusader capital city of Acre and explore its ruins, secret passageways and revel in the glory of the knights in armor, imagining their feasts and jousting matches. But before exploring these majestic fortresses and castles such as Judin, Monfort or Arsuf built in the 12th and 13th centuries, we must put these people back into their proper context of history. The idea of the chivalrous white knight on horseback, just, honorable, and fighting for duty & country is but a myth. By March of 1095 the Seljuk (Turkish-Persian) armies had overrun most of the Byzantine Empire and were now knocking on the door of Constantinople, the eastern gateway to Europe. Most of Spain, the western gateway to Europe, had already been conquered by Muslim forces centuries before. The Byzantine emperor, Alexis I was in such a panic that he asked his theological nemesis, Pope Urban II to help beat back this invasion of Europe, and thus began the Crusades.The various Muslim empires were weakened at the turn of the eleventh century due to rampant infighting and war. The Middle East was ripe for the taking. Pope Urban II’s charismatic call to arms led to action by serfs and nobility alike. His call for “liberation” with theological justification for a violent, murderous crusade was met in return for “indulgence” or complete forgiveness of ones sins. Of course the first victims of the crusaders were the Jews living in Europe who were massacred, and whose villages were pillaged and burned.On July 15, 1099 the crusader armies breached the northeast walls of Jerusalem, and the Latin Kingdom of Jerusalem was established. An eyewitness reported:In all the…streets and squares of the city, mounds of heads, hands and feet were to be seen. People were walking…over dead men and horses….If I described what I actually saw you would not believe me…What an apt punishment! The very place that had endured for so long the blasphemies against God was now masked in the blood of the blasphemers… -Raymond of Aguilers describes the fall of Jerusalem (“The Atlas of the Crusades” Jonathan Riley-Smith). 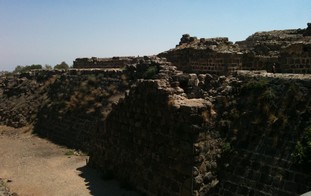 Photo: Joe YudinIn 1113, the Order of the Hospital of St. John of Jerusalem was recognized by the pope as an order of knights. By the 1130’s these former monks had become a full-fledged military unit, who championed the Christian poor and dying. They became known as the Knights Hospitallers. Their grand hospital in Jerusalem could accommodate 2,000 patients, and their order expanded its land holdings and fortresses throughout the kingdom. The best surviving example of a Hospitaller castle stands over the Jordan Valley called Belvoir (Fair View) or Kochav HaYarden in Hebrew built in 1168. Driving from Tiberias south on Route 90 in the Jordan Valley, halfway between Kibbutz Deganiya and Bet Shean, turn off to your right (west) on Route 717 up a steep, half paved, narrow road. Drive slowly and watch out for oncoming vehicles. Herds of gazelles roam these slopes as well as foxes, jackals, hyrax and domestic cattle. Vultures and other birds of prey often fly overhead. In winter and spring the hills are covered with colorful wildflowers making this picturesque setting 500 meters over the Jordan Valley even more beautiful.After paying the fee and parking (the shop is often closed here so bring your own water), continue down the path on the right side of the castle ruins between the moat and the sculpture garden until you get to an incredible view of the Jordan Valley below with the Mountains of Moab on the other side, the Judean Desert to the south and the Kinneret to the north. On a clear winter’s day you can see the snow-capped peaks of Mt. Hermon. Check out the sign here which has an excellent explanation of the Great Rift Valley. 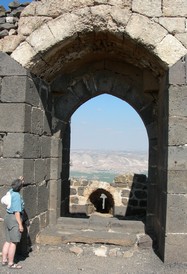 Photo: Joe YudinTurning left we enter the dry moat on its south-eastern corner which was built first to quarry stones for the fortress and second as a line of defense. Many of the stones to build this castle were taken from the nearby Talmudic era Jewish village. Keep an eye out for dressed stones in the walls of the castle that give evidence to this village. Look up and you can make out how the walls were slanted first in and then out. This glacis makes it almost impossible to scale, especially when arrows are being shot out through the loopholes in the walls and from the opposite protruding towers.Follow the signed arrows while inside the fortress. Go through the main gate and notice that you aren’t in the castle itself but walking along a massive switchback. If invaders were able to breach the main gate they would have still come under fire here while running up and around 180 degrees to the inner gate whose archway is still standing today. There is no spring up here so rainwater was a treasure. Check out the still intact cistern which is well worth a visit. The path will take you to a feeding station where Israeli park rangers have created a sanctuary for Griffon vultures. See if you can catch a glimpse of one. Wind your way around the path. Notice that this is a “concentric fortress” with an outer wall and an inner wall protecting an inner sanctum. Mercenaries would fight from the outside the wall but only the Hospitallers themselves could enter inside. Explore the kitchen, turrets, towers, laundry room, dining hall and what’s left of the church (notice the stairway) before coming out near the drawbridge. Do not go over the bridge but pass it. Just to the south of the bridge is a stairway leading down into the moat. Take it and come out of the secret sally port used by the knights to escape. Walk north in the moat a bit. It gives you a whole new perspective down here and then turn right into another sally port and go back up a set of stairs to the drawbridge. On the way back to your car over the bridge check out some of the crusader ruins lying about. In 1182 this fortress came under siege by Saladin and his Muslim army, who later defeated King Guy of Lusignan in 1187 at the Horns of Hattin. Belvoir held out until early 1189. The knights were allowed to march out of the land of Israel and withdraw to Tyre. The crusaders did return to the Land of Israel but they would never again retake Jerusalem.Joe Yudin became a licensed tour guide in 1999. He completed his Master’s degree at the University of Haifa in the Land of Israel Studies and is currently studying toward a PhD.