Sights and Insights: A city with a unique claim

Dr. Wayne Stiles discovers the archaeological treasures at Capernaum in the Galilee, and why it claims to be the “Town of Jesus."

By WAYNE STILES
Capernaum 311
(photo credit: Wayne Stiles)
Advertisement
Wayne Stiles is an author who has never recovered from his travels in Israel—and loves to write about them from his desk in Texas.Not many places in the Galilee can genuinely claim to be the “Town of Jesus.” But every visitor who enters the ancient site of Capernaum passes a sign that makes exactly that boast. 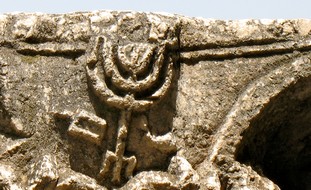 Photo: Wayne StilesA stroll around the site reveals numerous archaeological treasures. A millstone for grinding wheat. A second-century Roman mile marker. Numerous marble capitals that once graced now-forgotten columns. Jewish carvings adorn limestone reliefs. One of the bas-reliefs reveals a seven-branch menorah. Another outlines what many see as the Ark of the Covenant. Unquestionably, one of the greatest finds in Capernaum is the ancient synagogue. Although the white marble ruins date back to later than the first century, they rest on the thick, black basalt foundation of the synagogue from the time of Jesus. In fact, a number of historical and biblical events occurred in this synagogue. I marveled to walk in the space and imagine the conversations that occurred there, several of which Scripture records (Mark 1:21-27; John 6:35-59). 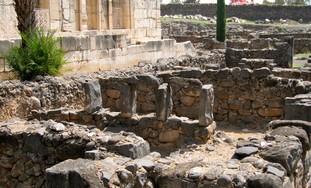 Photo: Wayne StilesAs I sat in the corner of the synagogue, I observed that the interior had a U-shaped seating arrangement. Columns lined the middle of the space with Greek uncials etched into their face. The whole structure represented an excellent example of a synagogue’s typical shape. Immediately outside, only a stone’s throw away, a strange looking building hovered like a spaceship over more basalt ruins. This modern structure is a church that stands suspended above the ruins of two other ancient churches from the fourth and fifth centuries; these churches hallowed the ruins of a first-century home. Only one Capernaum home in the Bible rises from the pages of Scripture—that of Simon Peter. Likely Peter’s home, this site would have housed Jesus a number of times (Mark 1:29-35). 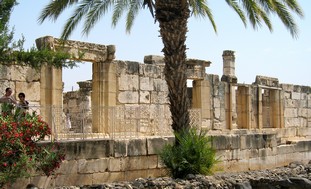 Photo: Wayne StilesAlready in existence for two hundred years, Capernaum represented a thriving fishing village in the first century. It served as a convenient stop along the Great Trunk Road, the vast International Highway that stretched from Syria in the north to Egypt in the south. This road ran the full length of Israel and also served as the first-century line of communication. In one day, news could travel twenty miles along this route in both directions. In two days, crowds in the multiple thousands could come to see the one they hoped would be the Messiah (Matthew 4:24-25). And they did. 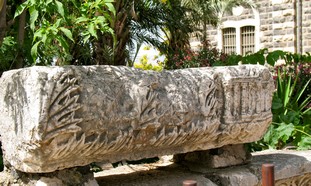 Photo: Wayne StilesAccording the Bible, after Jesus left his hometown of Nazareth, he moved his base of operations to Capernaum, beside the Sea of Galilee. This move fulfilled what the Prophet Isaiah had predicted centuries earlier (Isaiah 9:1-2; Matthew 4:14).
I think it’s ironic that so many Christian tourists still come to Capernaum and its surrounding area, just as they did in the first century—because that’s where Jesus was. What to Do There: Stroll around the grounds and visit the marvelously restored synagogue, and see the ruins of Peter’s house (ask about entering the spaceship-looking church for an even better view). Meander through the shaded areas and benches to examine the miscellaneous artifacts piled around. Finally, stroll down to the water’s edge and imagine the old fishing boats pulling in with the day’s catch. Read from the Bible events that occurred at Capernaum (Matthew 4:24-25; Mark 1:21-35; John 6:35-59). How to Get There: From Tiberias, travel north along Route 90 to the Kfar Nahum (Capernaum) junction. Head east along Route 87 about 2 km. Read Wayne’s blog and subscribe to his weekly Podcast at www.waynestiles.com
Advertisement
Subscribe for our daily newsletter