Only a few fishing boats float in Jaffa’s modest harbor today, hardly representative of its significant past.

By WAYNE STILES
View from Jaffa 370
(photo credit: Wayne Stiles)
Advertisement
Wayne Stiles has never recovered from his travels in the Holy Land. Follow him on Twitter (@WayneStiles) or on his blog at www.waynestiles.com.Every time I stay at a seaside hotel in Tel Aviv, I stroll down the beautiful boardwalk to ancient Jaffa. Wooden statues of Napoleon and some Egyptian ruins suggest significant history occurred here. But very little remains visible to speak of Jaffa’s significance. But history tells a different story. Jaffa’s name first appeared on the pages of history when the Egyptian Pharaoh Thutmose III captured it in the fifteenth-century BC. The Egyptian rubble I saw in Jaffa reminded me why all foreign powers wanted to control Israel. The land of Israel sat in a strategic position as the only intercontinental land bridge between the superpowers of the ancient world. The strategic International Highway—sometimes called the Great Trunk Road or the Via Maris (“Way of the Sea”)—ran the full length of the land.Prior to the construction of Caesarea in 22 BC, Jaffa served as Israel’s primary port for centuries. When King Solomon constructed his marvelous temple, he floated cedars of Lebanon south along the coast to Jaffa. From there the timbers made their way up to Jerusalem (2 Chronicles 2:16). When the returning exiles rebuilt the temple, they too brought cedars up from Jaffa to Jerusalem in the same manner (Ezra 3:7). 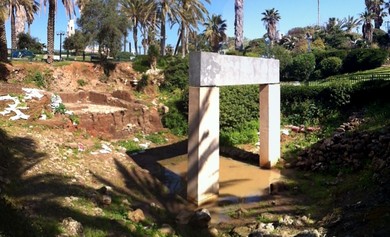 Jaffa (Photo: Wayne Stiles)
The prophet Jonah began his famous, fateful journey in Jaffa (Jonah 1:3). Boarding a ship bound for Tarshish, Jonah fled from God’s presence only to find himself swallowed by a great fish which the Lord appointed to save him. Some skeptics see the book of Jonah as a parabolic, non-historical fish story that's hard to swallow. However, a number of modern, historical accounts reveal incidents of people swallowed by big fish and whales—and yet surviving. (Check out National Geographic’s December 1992 article on the whale shark.) Moreover, scripture mentions Jonah as a historical person in 2 Kings 14:25 and Luke 11:32. He is no fairy tale. God had compassion on Gentiles and told Jonah to go preach to them. Instead, Jonah headed to Jaffa to do just the opposite. Jonah knew about God’s grace and that the Lord would relent of his intent to destroy Nineveh if the Gentiles repented. That’s exactly what happened. 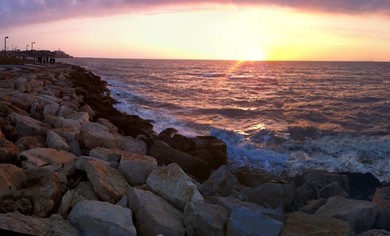 Jaffa (Photo: Wayne Stiles)
In the first century, God’s concern for Gentiles again appeared at Jaffa. The Apostle Peter, while staying in Jaffa at the home of Simon the Tanner, received a message from God to go to Caesarea. In spite of Peter’s confusion about the vision, he went to Caesarea and spoke of God’s grace to the Gentiles (Acts 10-11). After Caesarea’s destruction years later, Jaffa once again rose to prominence as the principal port for what was then called Palestine. In 1909 the modern city of Tel Aviv began on the outskirts of ancient Jaffa. Today, Tel Aviv has grown to become the largest metropolitan area of Israel, surrounding and embracing ancient Jaffa. In fact, until Israel built up Ashdod and Haifa, Jaffa served as Israel’s primary port.When I walk around the ancient site, I see only a few fishing boats and pleasure vessels floating in Jaffa’s modest harbor. But every time I go there I ponder what seems an ironic thought. The message of God’s concern for Gentiles went out from Jaffa, among many other places, through the lips of a reluctant Jonah and a confused Peter. Jaffa’s greatest export was God’s compassion. Every year, literally thousands of Gentiles go to Jaffa as part of their pilgrimage to the Holy Land. The message left from Jaffa, and the Gentiles come to Jaffa. I am one of them. How to Get There: Go to the beach at Tel Aviv and walk the boardwalk south to the ancient site of Jaffa. What to Do There:Climb the stairs and steep walkways to the top of the tell and enjoy the view. Meander through the Egyptian ruins. Ask someone where the site of Simon the Tanner’s house is. Read Jonah 1 and 4, as well as Acts 10-11. If you have time, watch the sun set over the Mediterranean.Wayne Stiles has never recovered from his travels in the Holy Land. Follow him on Twitter (@WayneStiles) or on his blog at www.waynestiles.com.Follow @JPost_Lifestyle
Advertisement
Subscribe for our daily newsletter