Sights and Insights: Shavuot at an unlikely place

The events that occurred in the Sorek Valley at wheat harvest cause us to consider the outcome of lives like the Levites of Beit-Shemesh.

By WAYNE STILES
Beit Shemesh view west of Sorek Valley 311
(photo credit: BiblePlaces.com)
Advertisement
Wayne Stiles is an author who has never recovered from his travels in Israel—and loves to write about them from his desk in Texas.Most people familiar with Shavuot associate the holiday with the Book of Ruth. After all, the most exciting events of Ruth’s story occurred during Bethlehem’s wheat harvest (Ruth 2:23). It’s no wonder today that many people include reading of the Book of Ruth as part of their celebration of Shavuot. RELATED:
What are you thankful for?Although I absolutely love the Book of Ruth, Shavuot more often causes my mind to wander further west of Bethlehem—down into the Shephelah. 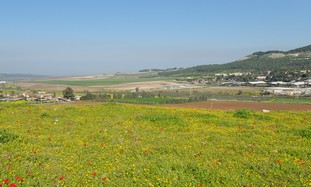 Photo: Bibleplaces.comI remember standing on the site of ancient Tel Beit-Shemesh in the Sorek Valley. As I looked around, I thought about the days of the judges. A glance to the northeast gave me a clear view of the neighboring sites of Zorah and Eshtaol, where the judge Samson grew up. A look to my left, down the valley, revealed the direction in which Samson’s carnal curiosity often took him—to the women of the Philistines. One such trip even occurred at the time of wheat harvest, or Shavuot (Judges 15:1).Years earlier, the Philistines had captured the Ark of the Covenant, eventually returning it on a cart up the Sorek Valley. As I stood on Beit-Shemesh, a site given to the Levites, I could barely make out a set of train tracks that ran roughly along the ancient path by which the ark returned to Beit-Shemesh. The Hebrews were reaping the wheat harvest in the Sorek Valley when they saw the ark. And although they were glad to see it, they made the mistake of looking inside the ark at the holy relics therein. Big mistake! (See Numbers 4:20; 1 Samuel 6:13-19.) The Levites of Beth-Shemesh knew better than that. (Remember that scene in Raiders of the Lost Ark when the Nazis looked inside the ark? Same idea.) The curiosities of both Samson and the people of Beit-Shemesh offer an interesting contrast. Samson had a curiosity about sin and the people a curiosity about God’s holiness. Ironically, the first made the second just as disastrous. Shavuot also bears the name “Feast of Weeks,” because it comes seven weeks after the feast of Passover. The name “Pentecost” also identifies the holiday since the celebration occurs “50 days” after Passover (Leviticus 23:15-16). By the first century, however, Shavuot had an additional meaning as a time to remember the giving of the Mosaic Law (perhaps as a result of Exodus 19:1). For whatever reason, the holiday came to be associated with a renewed commitment to God’s Law. The prophets anticipated a promised “New Covenant” would write the Law on the hearts of God’s people through the giving of the Holy Spirit (Isaiah 59:20-21; Jeremiah 31:31-34). Perhaps for this reason, the King James Version of Scripture translates Acts 2:1 with the words: “And when the day of Pentecost was fully come . . .” It was on the feast of Shavuot in Jerusalem that the Holy Spirit came upon God’s people—just as the prophets had promised. True, Tel Beit-Shemesh seems an unlikely place to remember Shavuot. But the events that occurred in the Sorek Valley at wheat harvest cause us to consider the outcome of lives like Samson and the Levites of Beit-Shemesh. It is precisely by observing such lives that our dedication to the fulfillment of Shavuot—or Pentecost—offers such hope.  In view of our own weaknesses, the holiday challenges us to adopt a renewed commitment to live according to Holy Scripture.What to Do There: Archaeologists have discovered a number of interesting finds at Beth-Shemesh, including Israel’s largest Iron Age water reservoir. Read the biblical events that occurred in the Sorek Valley at the time of Shavuot, including the return of the lost ark in 1 Samuel 6 and the wanderlust of Samson in Judges 15. Also read of the holiday’s first-century celebration when came the promised Holy Spirit in Acts 2. How to Get There: From Jerusalem, take Route 1 west to the Sha'arHaGai Interchange and merge onto Route 38. After about 10 km follow the signs to the tell.Read Wayne’s blog and subscribe to his weekly Podcast at  www.waynestiles.comShavuot is fast approaching, and as well as spending time with family and eating cheesecake, the festival is traditionally associated with the mitzva of “bikkurim” – to represent the time when farmers brought the first fruits to the Temple.Please send us a short description of a "first" which has been significant to you. We also want to see your pictures from the event so please send them in too.Email stories and pictures to [email protected]
Advertisement
Subscribe for our daily newsletter