One of King David’s most poignant prayers came after one of his greatest mistakes.

By WAYNE STILES
MAY 28, 2012 16:04
David's Tomb cenotaph370
(photo credit: BiblePlaces.com)
Advertisement
Wayne Stiles has never recovered from his travels in the Holy Land. Follow him on Twitter (@WayneStiles) or on his blog at www.waynestiles.com.Pieces of Hebrew and Christian scripture come together in an ancient building on Jerusalem’s Western Hill. In this one small structure, events of history and tradition combine to offer the ultimate answer to David’s prayer.In fact, the place offers hope for all of us. 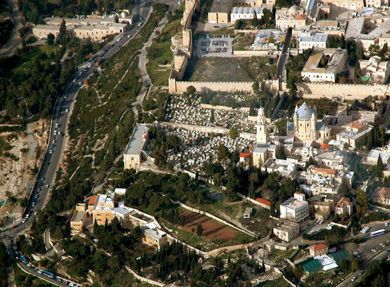 Photo: BiblePlaces.comMount Zion—A misnomer that stuckI exited the Zion Gate on the Western Hill in order to approach the building. The Zion Gate also takes the Arabic name, Bab Nabi Daud, “Gate of the Prophet David.” Byzantines in the fifth century really confused the names of this area. They mistook the Western Hill for biblical “Mount Zion,” and so the hill, the gate, and the “Tower of David,” all have wrong names that have stuck.I made my way south beside the beautiful, century-old Dormition Abbey. Its massive white stones and cone-shaped dome dwarfed the small building with a minaret and cupola. In this building lies the “Tomb of David,” another regrettable misnomer. David’s tomb actually rests somewhere in the City of David (1 Kings 2:10; Nehemiah 3:16; Acts 2:29).'David’s Tomb' and the Upper Room share square footage 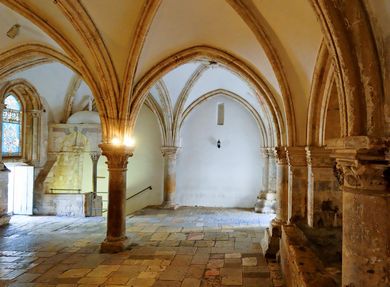 Photo: BiblePlaces.comAs I entered the small room, I saw Jews praying before a cenotaph (tomb marker or monument) that lay draped in dark purple velvet with the Star of David embroidered on it in gold thread. On top of the cenotaph sat silver crowns and arks of Torah scrolls from synagogues throughout the world—Jewish relics salvaged from the Holocaust. Because Jews couldn’t enter the Old City prior to the reunification of Jerusalem in 1967, many Jews prayed here instead. Many still do.Here Byzantines honored both David and James as the Jewish and Christian founders of Jerusalem. James’ church is located in the Armenian Quarter, but David’s tomb is commemorated at this location—where the “Church of Mount Sion” was. Archeological remains date back to the second century, a time when it would have been difficult and risky for Christians to congregate in this place—unless they had a good reason. It must have been an important place in the first century. 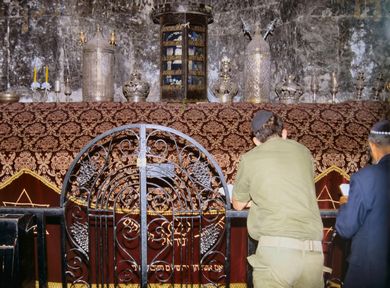 Photo: BiblePlaces.comAccording to Biblical Archaeology Review, Christians since the first century have venerated this site as the place where Jesus celebrated the Passover and Last Supper with His disciples (see Biblical Archaeology Review, 16:03, May/June 1990).If the archaeology and tradition bear true, this is the place where Jesus promised that the New Covenant would begin by the shedding of His blood (Luke 22:20). The Hebrew prophets anticipated a promised “New Covenant” would write the Law on the hearts of God’s people through the giving of the Holy Spirit (Isaiah 59:20-21; Jeremiah 31:31-34). 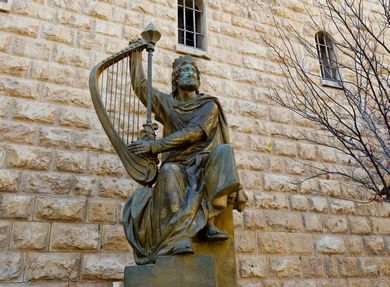 Photo: BiblePlaces.comShavuot, David, Jesus, and usPerhaps for this reason, the King James Version of Scripture translates Acts 2:1 with the words: “And when the day of Pentecost was fully come . . .” It was on the feast of Shavuot in Jerusalem that the Holy Spirit came upon God’s people—just as the prophets had promised.Shavuot also bears the name “Feast of Weeks,” because it comes seven weeks after the feast of Passover.  The name “Pentecost” also identifies the holiday since the celebration occurs “five weeks” after Passover (Leviticus 23:15-16). By the first century, however, Shavuot had an additional meaning as a time to remember the giving of the Mosaic Law (perhaps as a result of Exodus 19:1). For whatever reason, the holiday came to be associated with a renewed commitment to God’s Law.After leaving the Upper Room that day, I paused again at the “Tomb of David.” I reflected on how the New Covenant provides the final means for answering David’s prayer for forgiveness and the permanence of the Holy Spirit at Shavuot. In fact, this mercy provides the biblical motivation by which we live a life of renewed commitment to God’s Word (Romans 12:1; 1 Peter 1:3).Wayne Stiles has never recovered from his travels in the Holy Land. Follow him on Twitter (@WayneStiles) or on his blog at www.waynestiles.com.Follow @JPost_Lifestyle