Micaela Pavoncello says the oldest Jewish community in the Diaspora should sue for the Coliseum, which was financed by war booty taken from the Jews.

By STEVE LINDE, JERUSALEM POST CORRESPONDENT
JANUARY 30, 2010 22:49
rome synagogue 311
(photo credit: Steve Linde)
Advertisement
ROME – Beautiful. Sexy. Stunning. Cultured. Charming. And steeped in rich Jewish history.No, I’m not talking about Rome, Lazio or even Italy itself, although they are all these things too. 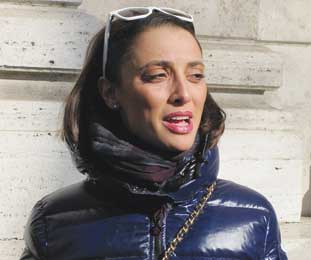 I’m referring to the vivacious Micaela Pavoncello, who leads the most fascinating guided tours of Jewish Rome.This month I was part of a 15-member group of journalists and tour operators who visited the Lazio region at the invitation of the Israel-Italy Chamber of Commerce and Industry, the Agency for the Promotion of Lazio and Alitalia.Micaela wowed us all on a tour of the Rome Synagogue (which the pope had visited just days earlier) and the Jewish Ghetto, where she also joined us for lunch at a kosher restaurant.Pavoncello has the looks of a supermodel, but it soon becomes clear that she’s not just a pretty face. In perfect, albeit Italian-accented English, she mixes an understated humor with a sharp intellect and broad knowledge of art and Jewish history.She was born in Rome 33 years ago to a father whose forefathers have been living here since the time of Caesar and a mother whose family came from Libya.“My family in Rome traces its roots back over 2,000 years,” Micaela says. “All of a sudden it’s super cool to be Jewish. Look at Madonna and Kabbala! And it’s Pope John Paul II that we have to thank for this.”She smiles broadly as she recalls John Paul’s landmark visit to the synagogue in 1986 and to Israel in 2000, and his friendship to the Jewish community of Rome. Her feelings about the current pontiff, Benedict XVI, are not so warm (“although I did appreciate his visit to the synagogue, which I attended”), and she makes no secret of her distaste for Pius XII, and Benedict’s moves to beatify him. During his visit to the synagogue this month, Benedict defended the Vatican’s position that the church acted behind the scenes to help Jews during the Holocaust,  and paid homage to the 1,022 Roman Jews sent to Auschwitz.“When the Nazis occupied Rome and rounded up the Jews [including her grandmother], they were detained for two days before being sent to Auschwitz on October 16, 1943,” Micaela says. “Why?” She pauses dramatically, and then answers: “They were waiting to see how the Vatican would react. And did the Vatican react?”The question is rhetorical, but Micaela says she doesn’t need the Vatican to open up its secret archives. She trusts the testimony of the only one of the 14 survivors who is still alive – 86-year-old Shlomo Venezia, the author of Inside the Gas Chambers: Eight Months in the Sonderkommando of Auschwitz.“He has a small shop near the Piazza di Trevi, and he is there most days,” Micaela tells me. “He has a great story to tell.”Venezia’s horrific experiences at Auschwitz makes for grim reading but his incredible survival against the odds is ultimately uplifting. In the first few years of the war, until 1943, the Italians protected the Jews – including his family – but when the Nazis invaded, the entire Venezia family was deported to Auschwitz. He decries the Vatican for “doing nothing” to save them, but decided nonetheless – unlike some prominent members of Rome’s Jewish community – not to boycott Benedict’s recent visit to the synagogue.“The pope is the pope,” he says. “We have to find a way to go forward together, as brothers.”Micaela clearly agrees, but that doesn’t mean she’s ready to forgive and forget.“Are there any lawyers here?” she asks the group. One man puts up his hand.“I am planning a lawsuit for the Coliseum,” she declares. “No, I don’t believe that the Jews built it, like some people say. But I do think Jewish money was used to build it.”During the Jewish revolt against the Romans in Palestine (from 66 to 70 CE), she explains, the Jews minted their own shekels.In the year 70, Roman Emperor Titus quashed the Jewish revolt, destroyed the Second Temple in Jerusalem, brought thousands of Jews to Rome as slaves (as well as the golden menora taken from the Temple, depicted on the triumphant Arch of Titus) and minted his own coin, Ivdea Capta (Judea Captured).The war booty from the Jews was then used to build the Flavian Amphitheater, known today as the Coliseum. “It was Jewish money that financed the Coliseum, so we should have a claim to it, right?” Pavoncello laughs. She notes that the first Jews, including her father’s ancestors, came to Rome in 160 BCE – “the oldest Jewish community in the Diaspora.”“It was Hanukka and the Maccabees decided to travel as ambassadors to Rome in order to ask for protection from the Romans against the Syrian King Antiochus who had been giving the Jews in Palestine a hard time,” she says. “So they came to Rome, and how could they not like it? Rome has a nice climate, there was an important harbor, and there was much potential for business and a better life. So they stayed.”“All that happened more than 2,000 years ago…and still we thrive here today, after the Inquisition, the persecutions, the Ghetto and the concentration camps,” she writes on her Web site. “There are only 16,000 Jews in Rome today, yet we are the oldest community in this city. We never moved from here. We have been witness to so much change, yet our traditions and values still remain strong while living a Jewish life in a society based around Christianity.”At lunch at Ba Ghetto, a kosher restaurant in the Ghetto run by two brothers from Israel, Amit and Ilan Dabush, Micaela gives us her theory on the Jewish artichoke, a dish which features prominently on menus throughout the Lazio region.“It was made by Jews many centuries ago,” she says. “Maybe it was by accident, or maybe because the Jews in Rome were so poor, they threw anything into oil to improve the taste.” 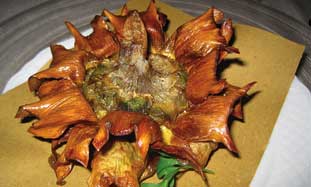 The dish (“Carciofo all Giudia”) involves deep-frying regular artichokes twice in hot oil, a process which allows one to eat the whole vegetable, including the leaves. It is quite delicious.After lunch, Micaela takes us on a wonderful tour of the Ghetto just before Shabbat.“Have you noticed how the word ‘ghetto’ is similar to the Hebrew word, ‘get’ (divorce),” she asks. “When you think about it, they are very similar. The Ghetto here divorced the Jews from the Christians.”As we walk through the narrow streets of the Ghetto, locals greet Micaela warmly, and she shows us where her family once lived (“I will never forgive them for selling the place! Today it’s worth a fortune!), and a place she’d like to buy when she gets married.“The problem is every time I come by, the old man who lives here tells me, ‘I’m not that old yet. I’m not ready. Go away!’”Micaela is coming to visit Israel this week (as is Italian Prime Minister Silvio Berlusconi), and she loves it here, but is happy living in Rome.“I lived for a year on Kibbutz Palmahim,” she says. “But the lifestyle here in Rome suits me better. I like the fact that even though the synagogue is Orthodox, I can drive there.”Whether or not you agree with the outspoken Micaela, the bottom line is: When in Rome, don’t do as the Romans do. Get Micaela to show you around – and you won’t regret it! (You may check her out and contact her at www.jewishroma.com).Micaela says that when Newsweek wrote an article about her, her mother was not too impressed, saying: “That’s not a Jewish magazine!” “Now if The Jerusalem Post writes about me,” she quips, “maybe that will impress my mom! That’s a Jewish publication.”Well, Micaela, we hope your mother is happy now.
The writer was a guest of the Israel-Italy Chamber of Commerce and Industry, the Agency for the Promotion of Lazio and Alitalia.
Advertisement
Subscribe for our daily newsletter