Off the Beaten Track: Trails and tribulations in the Golan

By JOE YUDIN
Nahal Yehudia 311
(photo credit: Courtesy)
Advertisement
Joe Yudin owns Touring Israel, a company that specializes in “Lifestyle” tours of Israel. The first time I came to Israel I was a 21 year old punk kid. I had graduated college three months earlier, packed a backpack and set out to see the world (through beer goggles) with a couple of frat buddies. I made it through most of western Europe before hooking up with a college age, six week tour of Israel. The trip changed my life. After the trip officially ended I stayed on a bit more. I had made friends with the groups’ medic/guard, a hippie freak of an Israeli who had just been discharged from a special ops unit of the IDF. I just didn’t want to leave and he said I could stay with him at his parents’ house for as long as I wanted before he went on a trip to South America in a couple of months. Sounded like a plan, and surprisingly his parents were really cool about it.
RELATED:
Off the Beaten Track: The original 300
Off the Beaten Track: Road tripping to Nahal ArugotI met all his friends. These were the coolest people I had ever met. They were exactly my age but seemed much more down to earth and willing to talk about what was going on in the world around us, but whenever the news came on the radio they turned it off. Interesting. One day we woke at the crack of dawn. My friend Hagia woke me with the words, “Let’s go for a hike”. There were about eight people in all, two car loads full including two beautiful girls, thin and bronzed, five rock solid boys just discharged from the army, and me, the post university beer bellied American lad. 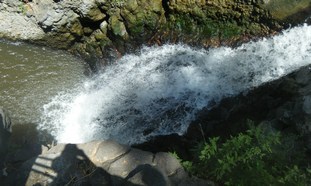 Photo: Joe YudinI didn’t know exactly what was going on when we pulled to the side of the road on the Golan Heights. There was nobody around. Not a soul, sign or shop. Three of the guys had a trail map in hand and were looking for a marker. In the distance a few ancient looking stone buildings stood amidst the tall golden weeds and wilting purple thistle, one pointed to them and we started to walk a faint trail seemingly leading there. The beginning of this trail sure has changed 20 some odd years later with its parking lots, bathrooms, kiosks, entrance fees and park rangers, but the trail is pretty much the same. One striking difference is the metal ladder bolted into the side of the 40 foot cliff, adjacent to the waterfall…that wasn’t there the first time I hiked this trail with Hagai and his friends. I remember staring down at the narrow pool 30-40 feet below for a good 20 minutes afraid, until Donna walked up to me and said “It’s easy!” then jumped off into the water below (a few years later two boys died while attempting the same thing. It is no longer permitted.)Every year when summer sets in just before school lets out (and all the kids descend on the trails) I grab a friend and hike the infamous Nahal Yehudia. I don’t think this Garden of Eden inspired me to make Aliyah to Israel, but it was just this setting, and the small taste of authentic Israeli camaraderie and culture here that did after exploring the country for the summer. I never went back to the States to live again. 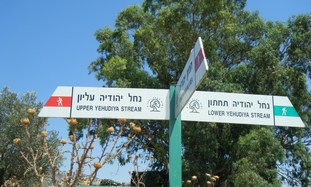 Nahal YehudiaThe village “Yehudiya” probably got its name from Bedouin who built these buildings in the 19th century out of the ruins of the ancient Jewish village from the Roman/Byzantine periods. It was called Sogana according to Jewish-Roman historian Josephus Flavious, which was abandoned in the 4th century C.E. Jewish motifs such as Menorahs and Aramaic inscriptions, have been excavated here and can be seen at the Archaeological Museum in Katzrin. The Syrians tried to erase all Jewish claims to this land by renaming the village “Arabiya” in 1949. Explore the ruins of the village and see if you can find any “Jewish” symbols, but watch out for the cow paddies! Now back to that famous first trip. We come to the top of the hill and see a huge waterfall pouring into a giant pool. The water has carved out this incredible picturesque canyon over hundreds of thousands of years exposing the volcanic basalt layers. We descend right into the running stream filled with crystal clear mountain water. Many plants mentioned in the bible bless the area including grapevine, date palms, myrtle and figs to mention a few. The canyon is lush with green and a smattering of pink thanks to the wild oleander growing throughout the banks of the running stream. At the bottom of the trail we notice a sudden change in our surroundings. We quickly move from the hot, arid and scorching climate on the Golan plain to the shaded, misty, jungle-like vegetation of the canyon. We navigate through the stream walking through the water or balancing ourselves on the many rocks and logs throughout the track. We reach the first large pool beneath a picturesque waterfall. A group of Israelis are rappelling down the cliff side others are scaling the rock face and jumping off into the clear mountain pool of cool refreshing water. Over the years people have died doing that so please don’t try it yourselves! We slosh our way to the next descent, down the rocks and boulders and into another pool swimming our way to the other side as the eagles and vultures soar overhead. I find a quiet, shady spot near the babbling brook, under a giant fig tree and we take a few moments to relax and have a bite to eat. “They will sit every man under his vine and under his fig tree and none will make them afraid for the mouth of God has spoken (Michah 4:4)”.
Ahead of us lies many more hours of climbing, sloshing, swimming and gawking at one Israel’s most picturesque and challenging nature reserves, and we haven’t even got to the tough part yet. You gotta love it.How to get there: From Tiberias take Route 90 north to Capernaum Junction and turn right onto Route 87 which runs along the north side of the Kinneret. Ascend up the Golan Heights on Route 87 passing Yehudiya Junction. After about 7 kilometers the parking lot for the Yehudiya nature Reserve will be on the left. Bring lots of water, and don't bring anything that can not get wet! Joe Yudin became a licensed tour guide in 1999. He completed his Master’s degree at the University of Haifa in the Land of Israel Studies and is currently studying toward a PhD.
Advertisement
Subscribe for our daily newsletter