It’s no surprise the German capital has an overwhelming amount of sites for the Jewish traveler to explore.

By TANYA POWELL-JONES
Wandering Jew: Berlin’s Yiddish walls
(photo credit: Reuters)
Advertisement
Spending a day in Berlin, visiting Jewish sites, will unsurprisingly focus heavily on the events of World War II. Although most already know what happened in the German capital, it’s the way such events are displayed that provides a truly different look at one of the darkest periods in Jewish history. And with a growing Jewish population, kosher dining options, and a vibrant nightlife, prepare for a full-on day of sightseeing.The Jewish presence in Germany dates as far back as the 13th century, and despite times of hardship, the community was thriving right up until the rise of the Weimar Republic in the 1930’s. 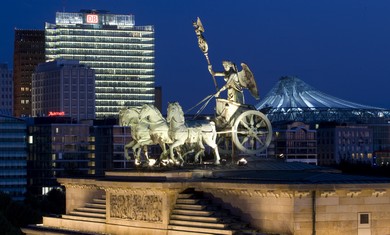 Of course, the rise of Hitler and the onset of the Holocaust devastated Berlin’s Jewish population, and by June 16, 1943, the Nazis declared Berlin Judenrein, “Clean of Jews.” Yet, despite such events, the Jewish population of Berlin today is once again on the rise and is currently estimated at more than 20,000.To begin a day of sightseeing, head to the neo-Byzantine style Neue Synagogue, which is unmissable with a big dome on the roof. The synagogue was consecrated on Rosh Hashana in 1866 and the sheer size and scale of the synagogue reflected Berlin’s position as the center of liberal Judaism. The building suffered from heavy fires and bombings and the majority of the synagogue has never been rebuilt.The synagogue now functions as a museum, and is full of exhibits you might expect such as Torah, scrolls, original architecture, and just one remaining prayer room. To get there, take the S-Bahn or U-Bahn to Oranienburger Tor or Str 28-30. 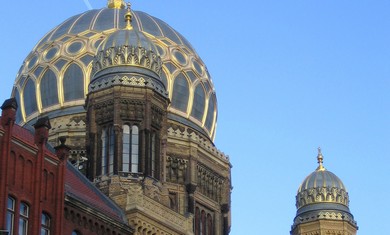 Next continue to The Große Hamburger Straße in Berlin’s trendy Mitte district. Here lies Berlin’s oldest Jewish cemetery, dating back to 1672. The cemetery was used as a holding place for Jews before their deportation to concentration camps, and was completely destroyed by the Nazis during World War II.Today, the site is more of a park. A number of other Jewish institutions were present here that were destroyed during the Nazi period. Several memorial plaques and monuments line the street, testifying to the once vibrant Jewish community that inhabited it.Heading back into the center, one of the main Jewish memorials in Berlin is located south of the Brandenburg gate, one of the most well-known landmarks in Berlin. The Holocaust Memorial was designed by US architect Peter Eisenman, and erected in 2005. The memorial occupies 205,000 square feet of space, and is made up of 2,711 grey stone slabs that have no apparent markings. Each slab is unique in shape and size and visitors can easily access the site. 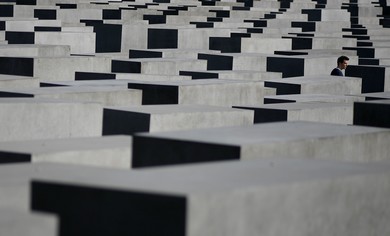 The architects’ aim was for the memorial to blend into the city; to be used for shortcuts on the way home from work or a place of peace and quiet on a chaotic day, and that’s exactly what has happened. Yet, I couldn’t help finding the memorial uninspiring and unmoving. I thought if the slabs had markings or some kind of indicators as to the origin of their existence the whole experience would have a much more personal connection for the visitor.After spending the morning delving into Berlin’s not so distant past there are a couple of options for a kosher lunch, such as the Beth Cafe, on Tucholskystr. 40, 10117. They serve Eastern European, Middle Eastern and American food as well as kosher wines and beers. The average cost is 15 euros per person. There’s also Café Bleibergs, on Nürnberger Straße 45A. They serve general café and vegetarian food, with the option to take-away. The average cost is between 5 to 10 euros per person.A further place of interest is Bebelplatz, named for August Bebel, a leader of the Social Democratic Party of Germany in the 19th century. The site is a public square in the central Mitte district of Berlin, which houses the State Opera House, St. Hedwig’s Cathedral and the Old Library. Unfortunately, the Bebelplatz is sometimes best known for the events of May 10, 1933. On that date, the Nazi minister for propaganda and public enlightenment, Joseph Goebbels, organised a nationwide book burning, with more than 20,000 books being burned in the middle of the Bebelplatz. Today, visitors can look through a glass plate in the ground and view rows of empty bookshelves. 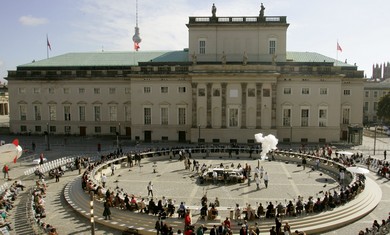 For one of the most emotional and morally challenging memorials to the Jewish victims of the Holocaust, look no further than the Bavarian Quarter, Bayerische Platz. The artists Renata Stih and the art historian Frieder Schnock created the memorial, “Places of Remembrance,” here in 1993.This highly praised memorial consists of 80 street signs scattered all over the Quarter. The street signs are attached to lampposts with one side of each sign showing a picture of such items as a loaf of bread and the other a piece of anti-Jewish legislation.This decentralised memorial is in a very residential area and there are few tourists. The memorial has the feeling of being a more personal remembrance by the neighbourhood, and when I visited I found myself asking: What did the residents think when such laws were passed? Did they comply? Did they protest? Then, walking around, you see how such tiny acts of systematic discrimination by the Nazis could lead to the horrors of the gas chambers. 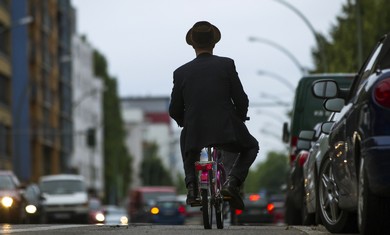 After spending the day trying to absorb all that Berlin has to offer there is the option to taste some traditional Jewish cuisine and specialties from the sea, at the upmarket “Kosher Classroom” on Auguststrasse 11-13. This recently opened, sleek restaurant provides a cultured setting for an evening meal, with a four-course menu costing 75 euros per person. But should you be in town for Shabbat, or looking for an overnight stay, then The Crowne Plaza Berlin City Centre is the only hotel for Jewish religious observant travellers. They offer a pre-packed kosher lunch or dinner. And room prices vary with the average being 120 euro per night.For the evening you could take a walk down to Oreanienburger Straße. This central street used to be the center of Jewish life in the city. Today, the area is known for having a more quirky and alternative scene. Don’t worry if this doesn’t grab you because there will most certainly be a place to pop in to nearby, for this is Berlin and the choice is plentiful.The Jewish Virtual Library contributed to this report.Follow Tanya on Twitter - @TPowellJones
Or email [email protected]