Freiburg has an abundance of Jewish history and symbols - from medieval sculptures to poignant pavements.

By TANYA POWELL-JONES
Freiburg view 370
(photo credit: Tanya Powell-Jones)
Advertisement
Located in the south-west of Germany, Freiburg, on the edge of the Black Forest, has had a Jewish presence since the 13th century.Undergoing turbulent times throughout the centuries the Jewish population has always been relatively small, numbering just over a thousand before World War II. After the Nazi's rise to power many Jews fled and nowadays the city is home to only a few hundred.As the sunniest and warmest city in Germany, Freiburg is also steeped in hundreds of years history. And, of course, some of that is Jewish history too. Nestled between the Black Forest and the Rhine, this is a place where new synagogues meet old ones, where the streets are literally paved with memories and the buildings hold the ideas and thoughts of their medieval creators. A day here really is a trip through centuries. 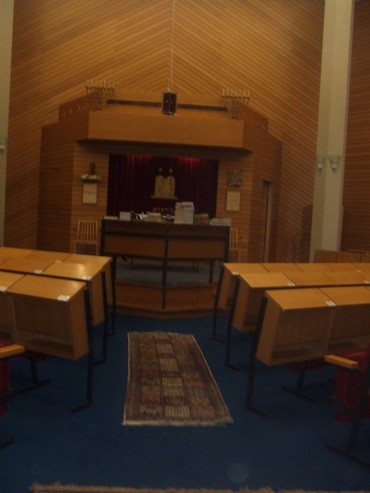 Inside of the new synagogue Freiburg (Tanya Powell-Jones)To start a day of sightseeing, begin at the new synagogue, which was opened in 1987. The synagogue is located at Numbmannstr 14, a short walk from the main square, Munsterplatz. I found the exterior of the building rather bland, however, upon entering take note of the beautiful oak doors that date back to the pre-war synagogue demolished by the Nazis. The door was integrated into the building, which was sponsored by the City of Freiburg and the Land of Baden-Wuerttemberg. If visiting the site of the old synagogue, head to the Platz der alten Synagogue (Place of the Old Synagogue). The site is on the outskirts of the city, on the corner of Rotteckring and Bertholdst. Here you can read about how the synagogue was burned in November 1938.Entry into the new synagogue is generally permitted and they hold regular services should you wish to visit. The Platz der alten Synagogue is either a half an hour walk or ten-minute car ride from MunsterplatzNext, there is the Jewish cemetery on the corner of Elsässer Strasse and Rosenbaumweg. The cemetery was opened in 1870 and is still used today. It contains a memorial to the Jewish soldiers killed in World War I and a memorial to the memory of the Freiburg Jewish community of 1933-45.  The cemetery is a ten-minute car ride from Munsterplatz or five-minutes via car or tram from Platz der alten Synagogue. 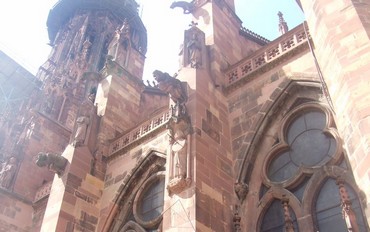 Freiburg Minster - Exterior (Tanya Powell-Jones)Unfortunately, there aren't any kosher options for lunch but there is a very charming restaurant with panoramic views, Greifeneggschloessle. Lunch for two will be around 50 EUR and there is a wide selection of local food. The main pull of this restaurant is the location, situated high above the city. And as Freiburg is also home to a vineyard there's the chance to taste some local wine. A second option is the food market, open everyday apart from Sundays. Situated centrally in the Munsterplatz, there is a variety of fresh food, and you can have lunch on the spot for as little as 10 EUR.For the afternoon the main square is full of shops and magnificent architecture to explore. One thing to look out for as you walk around are the Stolpersteine, or“stumbling blocks”, an initiative of the artist Gunter Demnig.  These little squares of metal are embedded in the pavements and are there to recall the Jewish victims of the Nazis. The squares are also located in front of where the people used to live. Each one tells the details of a specific individual. For example, one square reads, “Here lived Julian Rosenthal, Born 1878, Deported 1940, Gurs,Murdered 1942 in Auschwitz”. I found this to be an incredibly personal memorial that really keeps alive the memory of Freiburg's former Jewish residents. 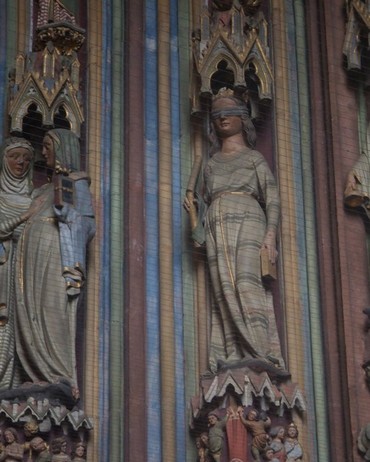 Covered eyes - Freiburg minster (Tanya Powell-Jones)Wandering around the city you can't help but notice the gigantic Gothic cathedral in the center, the Freiburg Minster. This is worth particular mention because of the Jewish symbols located inside and outside of the building. Gothic cathedrals tend to incorporate biblical stories in their statues and sculptures in order to convey a certain theological message. Freiburg Minster is full of messages to Judaism including a statue that depicts a character with their eyes covered. The character is said to represent the Jewish people, who were thought to be blind to the teachings of Christianity, which is why the eyes are covered. This is said to be one of the first cases of anti-Semitism in Europe. There are also three statues depicting the Synagogue Defeated, the Sacrifice of Isaac, as well as King David and his harp, which can be see on the outside walls.Although not holding any particular Jewish history, Freiburg's enviable position means it's only a simple train ride away from the region of the Black Forest. Taking a little over an hour, the Black Forest is a stunning place full of legends. And it wouldn't feel right to talk about Freiburg without mentioning this travel option. If you have the time and you are an outdoor traveller then you may want to consider this. The Forest offers hikes, cycling or cross-country skiing, and the black fir trees and scenic hills are perfect for any afternoon.As the day draws to a close the options for dinner are numerous. There are many restaurants throughout the main square and one local favorite is Weinstub Oberkirch, located in the heart of town at Munsterplatz 22. This is a small and intimate restaurant with dinner costing around 35 EUR per person. If you fancy a more local pastime then head to one of the many beer gardens all over the city. Popular choices include Kybfelsen, Der Kaiser and Gastatte Eimer to name but a few. Most serve bar snacks as well as beer and the outdoor seating provides an opportunity to take in this historic and enchanting city.The Jewish Virtual Library contributed to this report.Follow Tanya on Twitter - @TPowellJones
Or email [email protected]
Advertisement
Subscribe for our daily newsletter