In this new column, Tanya Powell-Jones gives her insight and tips to the global traveler in pursuit of Jewish heritage trails.

By TANYA POWELL-JONES
London 370
(photo credit: Wikimedia)
Advertisement
Traveling the world in search of Jewish heritage trails is no easy task, since Jewish communities around the world are so diverse and forever evolving. This new column will explore specific destinations that have a lot to offer those in search of Jewish history, while giving tips and advice on how to make the most of a trip. Upon landing in London, you might think that in order to see its Jewish heritage, you need to head to the modern hubs of Jewish life, such as Golders Green or Hendon. Although both areas are brimming with bagel shops, it’s really the East and West End that are littered with memories of Jewish London from throughout the centuries. Start off the day in Heneage Lane at Bevis Marks synagogue – the oldest surviving synagogue in the country – which has remained virtually unchanged since 1701. The synagogue is tucked away in a courtyard because Jews weren’t allowed to build in public thoroughfares at the time. Going inside the building the original dark oak benches and magnificent ark are all intact. The closest underground stations are Aldgate and Liverpool Street.

Admission is 4 pounds and it is open weekday mornings from 10:30 a.m. For a walk down one of London’s most famous streets, also the home of the rag trade, head towards Petticoat Lane. This is around a five-minute walk via Harrow Place and Stoney Lane. When Jews were fleeing the pogroms in the late 19th century, they arrived here and set up market stalls. It was here that successful businessman Sir Alan Sugar started his life as a Petticoat Lane stallholder. Today, when walking around, you’ll just have to imagine the street’s Jewish past because it’s now filled with Asian sellers. 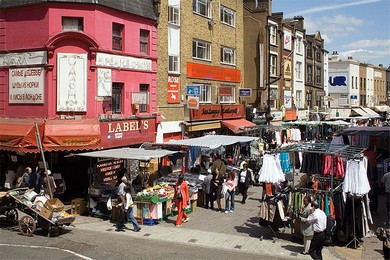 Petticoat Lane (Wikicommons)Many Jewish immigrants came to London with virtually nothing in the 19th century and they were in dire need of lodgings and food. To accommodate them, the Wentworth Dwellings were built on New Goulston Street. A five-minute walk via Cobb Street will take you here. Just around the corner on neighboring Brune Street is the building that housed the “Soup Kitchen for the Jewish Poor”. The soup kitchen itself is long gone and all that remains is the name carved on the front of the building, but it’s impressive nonetheless. The Jewish immigrants to London brought with them a rich and dynamic form of theater to the east end. To see where it all began go to 6 Princelet Street, which is a ten-minute walk towards Brick Lane. When you get there you’ll see a coal hole cover (a hatch in the sidewalk) with a viola on it marking the place. Established in 1886 the theater closed in 1887 after someone wrongly shouted “fire” and 17 people died during a stampede for the exit. 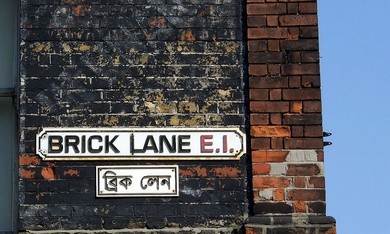 Brick Lane street sign (Wikicommons)A visit to the East End wouldn’t be complete without a stroll down the legendary Brick Lane. Located just off Princelet Street and once the hub of Jewish life, the street is now the curry capital of the UK. However, there is one remaining relic of the street’s Jewish past, the twenty-four hour Brick Lane Beigel Bake. This is also really the only place to stop for a kosher lunch in the area. As well as providing a slice of history you can get all the usual Jewish food for a very reasonable price, for example a crème cheese bagel is only a pound. 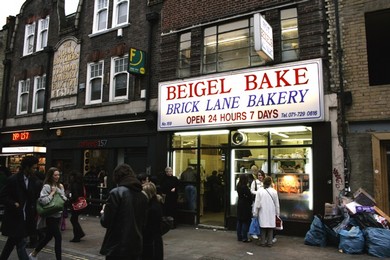 Beigel Bake (Wikicommons)After spending the morning delving into the history of the Jewish East End why not try the lesser-known Jewish West End in the heart of London for the rest of the day.For the afternoon you can visit one of the oldest and most beautiful synagogues in London and the country, The New West End Synagogue. Situated in St Petersburg Place, Bayswater, the synagogue is a 19th century building that has been described by English Heritage as "the architectural high watermark of Anglo-Jewish architecture". The best way to get there is to use the underground station to Bayswater. There is also the West London Synagogue nearby on Upper Berkeley Street. The synagogue dates back to the 19th century making it the oldest standing Reform synagogue in the UK. 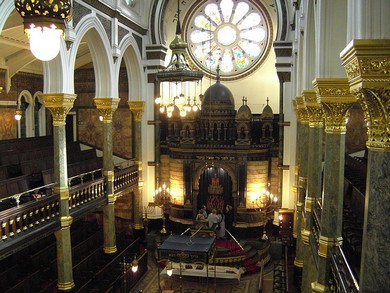 West London Synagogue (Wikicommons)Although not in the West End, the Wiener Library is one of the world’s leading and most extensive archives on the Holocaust and Nazi era. If you want to visit then you can find the library at 29 Russell Square and the nearest underground station is Russell Square.If you’re looking for some Jewish and Israeli culture you can check out the Spiro Ark on Baker Street. They host regular theater performances, music events, lectures, exhibitions and films. Located in a little basement this place is open to everyone. The nearest underground station is Baker Street and you can book tickets to the films online. The cost is generally 10 pounds. For the evening check out one of London’s best kosher restaurants, Bevis Marks on Middlesex Street. The menu has a modern British twist and the average cost is 50 pounds per person. The area is a former hub of Jewish culture that became popular after Oliver Cromwell, a key political figure in 17th century British history, decreed that The Jewish people could come back to Britain over 300 years ago after being exiled. If you fancy having dinner and getting involved in current thought on Israel and global affairs there’s The Frontline Club. The club hosts a changing schedule of films and discussions on a wide range of topics. Tickets start from 10 pounds. The restaurant, not kosher, has a seasonal menu with prices starting from around 15 pounds per person for two courses. To close the day you have London’s most famous literary pub, the former Jewish-owned Fitzroy Tavern, on 16 Charlotte Street. In the early 20th century, Judah Morris Kleinfield of Polish-Russian origin became the pub licensee. Under his management the pub was a huge success becoming the hangout for the likes of Augustus John, Dylan Thomas and George Orwell. 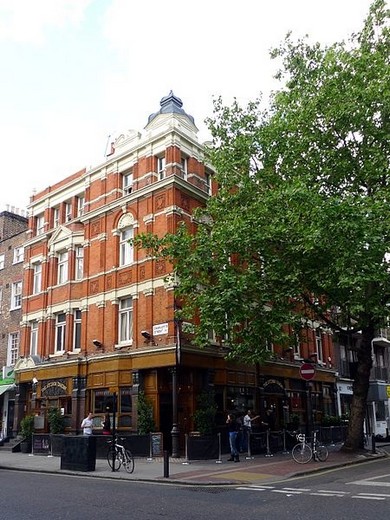 Fitzroy Tavern (Wikicommons)If you fancy a drink here then the pub is a five-minute walk from Goodge Street underground station and every Wednesday evening they host the Pear Shaped Comedy Club.The Jewish Virtual Library contributed to this report.Follow @JPost_Lifestyle