With a long history dating back over 1,000 years, Prague’s Jewish Quarter contains some hidden treasures.

By TANYA POWELL-JONES
Prague 521
(photo credit: YAAKOV LAPPIN)
Advertisement
The Jewish history of Prague can be found all over the city. From the Jewish Quarter, a former ghetto, to literary legends that have left a lasting legacy. Adding to the city’s overall charm is the option to taste some of the Jewish eastern European delicacies that have stood the test of time.Prague's Jewish Quarter is a place of new and old, magic and progress. Here is where the mystical Golem was born and where the soul of Franz Kafka remains. Included into Prague in 1850, the Quarter was home to the biggest Jewish community in Europe.The Quarter’s past has been the subject of various films, the most recent of which is Nicky’s Family. Set at the beginning of the German invasion, this inspirational film, which won the Audience Award at the Karlovy Vary Film Festival 2011, follows the story of the rescue of 669 Czechoslovakian children, most of whom were Jewish.To start the day, head to to The Old-New Synagogue on Maiselova Street, one of the Jewish Quarter's main arteries. As the oldest active synagogue in Europe and one of the oldest in the world, it’s particularly appealing for it’s 13th Century Gothic building. There are various legends connected to this place such as that of the Prague monster Golem. Some even claim the synagogue was built from the stones of the Second Temple in Jerusalem.As you leave the synagogue you’ll see a clock tower that sits on top of the Jewish Town Hall next door. Adorned with Hebrew figures and hands that run from right to left, this elegant 19th Century two-storey building has a distinct architectural appeal. Located downstairs is the only part open to the public, the kosher eatery Shalom. If you’re in town for Shabbat then you can book your place here and meals are served after the synagogue service.Continuing on Maiselova Street you’ll come to the Old Jewish Cemetery, which is about a ten-minute walk. Founded in 1478 the graves are on top of each other because of a lack of space. Around 100,000 people are buried here and the most prominent tombstone is that of Rabbi Loew, creator of the 16th Century legend The Golem. 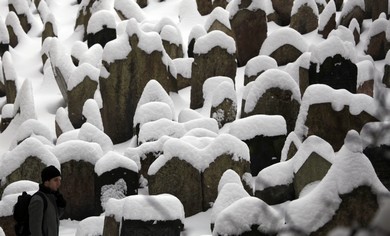 Prague's Jewish Cemetery (Reuters)After spending the morning seeing the Quarter, there are a couple of options for lunch such as The King Solomon and Chabad's Shelanu. Both of which are off Maiselova Street and on Břehová. The King Solomon, the oldest kosher restaurant in the Czech Republic, serves local Jewish food. Main dishes are $25 - $50. Shelanu is a kosher restaurant and deli with prices starting at $8.After lunch, follow in the footsteps of one of the most famous writers of the 20th Century, Franz Kafka. During the 20th century there were a number of German-Jewish authors who were known as the “Prague circle” such as writer and critic Max Brod who coined the term, the blind poet Oskar Baum and Bohemian writer Hermann Ungar. Yet Kafka was the only one to emerge from this circle to achieve international recognition.To see where it all began for Kafka, start by visiting his birthplace. At the site, on the corner of U Radnice and Maiselova, there is a life-sized bust of him in black bronze by Jaroslav Róna. Next door there’s a little museum dedicated to all things Kafka. Inside you can pick up books written about or by the author and there is the option to visit the permanent exhibition. If you go in you’ll see it displays a first edition of the Metamorphosis, one of the few books published in his lifetime.Going towards The Celenta - one of Prague’s oldest streets – you’ll come to the Old Town Square. The house marked Celenta 2, the House of Three Kings, is where the famous Prague writer and his family lived from 1896 to 1907. 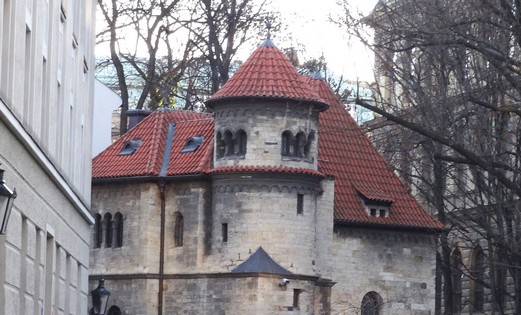 For the next stop, head to Břehová and onto the north end of tree-lined Parizska. Beside the Intercontinental hotel is the site of a demolished building. Kafka lived here from 1907 to 1913, writing the Metamorphosis in a third-floor room. Lastly, to see Kafka’s burial place a trip outside of the Jewish Quarter to the New Town is necessary. At The New Jewish Cemetery on Izraelská, a forty-five minute walk or ten-minute drive, is where he and his parents are buried.After all the sightseeing, the elegant Café Louvre or the modern Dinitz Café are great choices for dinner. Café Louvre, on Národní Třída, is one of Kafka’s old haunts. They serve a range of traditional dishes for around $10. The kosher Dinitz Café offers traditional and Middle Eastern food with a special Israeli cuisine-sampling menu for $100 for two (including a bottle of Carignan). You can get there by going just off the main footfall path on Bílkova Street.Finally, with Prague’s medieval houses, synagogues and Art Nouveau facades as your backdrop, you can end the day with a drink at The Franz Kafka pub. Situated on Maiselova it really only represents Kafka by name.The Jewish Virtual Library contributed to this report.
Follow Tanya on Twitter - @TPowellJones