Adopting Trump's campaign message as his own, Duke said he is running for US Senate to "save Louisiana" the same way Trump is running to "save America." 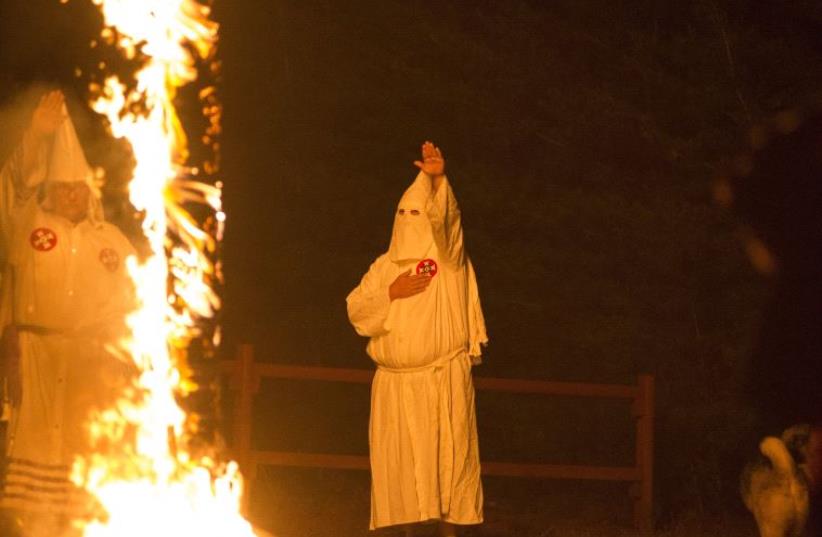 A member of the Ku Klux Klan salutes a lit cross during a cross lighting ceremony.
(photo credit: REUTERS)
Advertisement
WASHINGTON -- David Duke, a former Ku Klux Klan leader made famous for his conspiracy theories that Jews run the world, began a robocall campaign this week encouraging Louisiana voters to support GOP nominee Donald Trump for president.Adopting Trump's campaign message as his own, Duke said he is running for US Senate to "save Louisiana" the same way Trump is running to "save America.""Hi, this is David Duke," the robocall transcript reads. "I’ll tell the truth that no other candidate will dare say. Unless massive immigration is stopped now, we’ll be out numbered and outvoted in our own nation.""It’s happening," he continues. "We’re losing our gun rights, our free speech. We’re taxed to death. We’re losing our jobs and businesses to unfair trade. We’re losing our country."Duke also targeted acclaimed singer Beyoncé in the call for her performance of the song 'Formation' during last year's Super Bowl. The song has been received critically as the artist's embrace of her blackness, and as a political anthem inspired in part by the Black Lives Matter movement."Look at the Super Bowl salute to the Black Panther cop killers," Duke says. "It’s time to stand up and vote for Donald Trump for president and vote for me David Duke for the US Senate."Trump was challenged to disavow Duke during the Republican primaries, and did so after several days of media questioning. The nominee maintains that he rejects Duke's message, his support, and his ilk.