By REUTERS
Russian toy protest 390
(photo credit: REUTERS)
Advertisement
MOSCOW - Russian protesters set up plastic elephants, toy tigers and Lego men carrying banners against Vladimir Putin's 12-year rule on Sunday in the Siberian city of Barnaul, where demonstrations have been banned ahead of the March 4 presidential election.Local authorities have denied requests for rallies against a disputed parliamentary election in December that saw Putin's United Russia party returned with a slim majority and against Putin's plan to stand for the presidency.The tiny toys appeared in the snow in the city's central square, the latest in a series of "nanoprotests."An earlier request to stage a protest with toys was denied as, officials said, they were not Russian citizens. 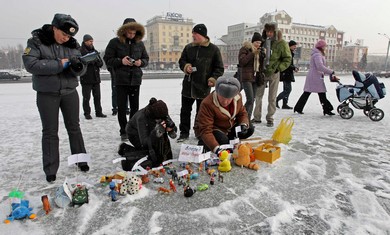 "Our authorities have no understanding of free speech," said Sergei Mameyev, who said he represented the "Decembrists of Barnaul."The protest highlights the restrictions faced by many groups across Russia who struggle to gain permission for rallies.A policewoman standing over the figures with a clipboard said she was filing a report. "I'm doing my job. I'm writing down what I see," she told a crowd gathered in the square.Putin was president from 2000-2008 when he was barred by the constitution from running for a third successive term but has remained in charge as Russia's prime minister. His re-election as president could see him stay in power until 2024. 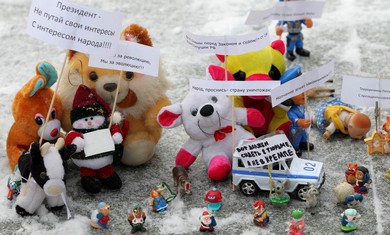