Ahmadinejad unveils new centrifuges able to enrich uranium much faster; "We frankly don't see a lot new here. This is not big news," US responds.

By REUTERS
Ayatollahs centrifuge 390
(photo credit: REUTERS)
Advertisement
The United States on Wednesday played down Iran's latest announcements on advancements in its nuclear program, saying its reported breakthroughs were "not terribly new and not terribly impressive."Iran proclaimed advances in nuclear know-how, including new centrifuges able to enrich uranium much faster. 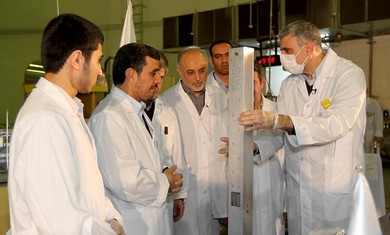 "We frankly don't see a lot new here. This is not big news. In fact it seems to have been hyped," a State Department spokeswoman said.Despite Washington's dismissal of the nuclear advancements as unimportant, the moves appeared designed to show that increased sanctions are failing to halt Iran's technical progress and to strengthen its hand in any renewed negotiations with the major powers. 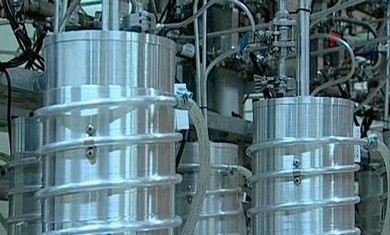 "The era of bullying nations has past. The arrogant powers cannot monopolize nuclear technology. They tried to prevent us by issuing sanctions and resolutions but failed," Iranian President Mahmoud Ahmadinejad said in a live television broadcast."Our nuclear path will continue."

Click here for full Jpost coverage of the Iranian threat
However, Iran's Arabic-language Al Alam television said the government had handed a letter to EU foreign policy chief Catherine Ashton expressing readiness to "hold new talks over its nuclear program in a constructive way".An Ashton spokeswoman confirmed receipt of the letter, saying she was evaluating it and would consult with the United States, Russia, China and other partners among the big powers.Iran has long refused to negotiate curbs on its nuclear program, saying it is intended to produce electricity for booming domestic demand and for other civilian uses.New generation of centrifuge introducedThe nuclear achievements proclaimed by Tehran involved a new line of uranium enrichment centrifuge and the loading of its first domestically produced batch of fuel into a research reactor that is expected to soon run out of imported stocks.Tehran has for some years been developing and testing new generations of centrifuges to replace its outdated, erratic "P-1" model. In January it said it had successfully manufactured and tested its own fuel rods for use in nuclear power plants.Ahmadinejad said the "fourth generation" of centrifuge would be able to refine uranium three times as fast as previously. 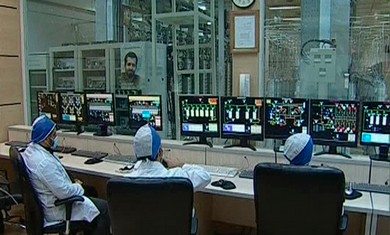 If Iran eventually succeeded in introducing modern centrifuges for production, it could significantly shorten the time needed to stockpile enriched uranium, which can generate electricity or, if refined much more, nuclear explosions.Last year, Iran installed two newer models for large scale testing at a research site near the central town of Natanz.But it remains unclear whether Tehran, under increasingly strict trade sanctions, has the means and components to make the more sophisticated machines in industrial quantity. 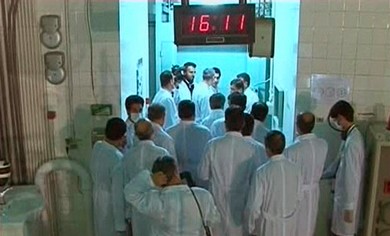 "We have seen this before. We have seen these announcements and these grand unveilings and it turns out that there was less there than meets the eye. I suspect this is the same case," said Shannon Kile at the Stockholm International Peace Research Institute (SIPRI).However, Ahmadinejad said Iran had significantly increased the number of centrifuges at its main enrichment site at Natanz, saying there were now 9,000 such machines installed there.In its last report on Iran, in November, the UN nuclear watchdog said there were 8,000 installed centrifuges at Natanz, of which up to 6,200 were operating.Ahmadinejad loads Iranian-made fuel rods into reactorState television aired live footage of Ahmadinejad loading Iranian-made fuel rods into the Tehran Research Reactor and called this "a sign of Iranian scientists' achievements".The Tehran reactor produces radio isotopes for medical use and agriculture. Iran says it was forced to manufacture its own fuel for the Tehran reactor after failing to agree terms for a deal to obtain it from the West. 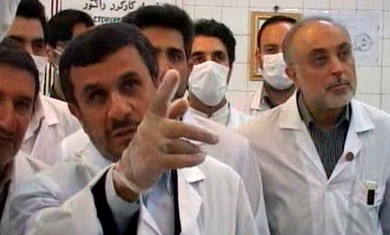 In 2010, Iran alarmed the West by starting to enrich uranium to a fissile purity of 20 percent for the stated purpose of reprocessing into special fuel for the Tehran reactor.In boosting enrichment up from the 3.5 percent level suitable for powering civilian nuclear plants, Iran moved significantly closer to the 90 percent threshold suitable for the fissile core of a nuclear warhead.Analysts remained doubtful that Iran would be able to operate the research reactor with its own special fuel."As usual, the announcement surely is exaggerated. Producing the fuel plates ... is not so hard. But the plates have to be tested for a considerable period before they can be used safely in the reactor," said Mark Fitzpatrick of London's International Institute for Strategic Studies."If Iran is really running the reactor with untested fuel plates, then my advice to the residents surrounding the building would be to move somewhere else. It will be unsafe."
Advertisement
Subscribe for our daily newsletter