An Israeli artist created a massive mural featuring an idealized Israeli landscape in the city center of Vilnius.

The work by Zoe Sever was inaugurated at the end of November as a gift from the Embassy of Israel in Lithuania for the 700th anniversary of the foundation of Vilnius. It also celebrated 30 years of diplomatic relations between the two countries.

Depicting Israel’s coastline and some of its most iconic buildings, the mural is titled after Zionism founder Theodore Herzl’s famous motto “If you will, it is no dream.”  It covers the entire wall of a building located near the city’s covered market. It was completed by two artists from the local “Open Gallery.”

“This diverse and colorful painting mirrors the face of Israeli society and instills in those who see it an optimistic feeling about fulfilling dreams in the spirit of Herzl,” said Ambassador Hadas Wittenberg Silverstein. Wittenberg Silverstein thanked her predecessor Yossi Avni-Levy and his team for initiating the project. 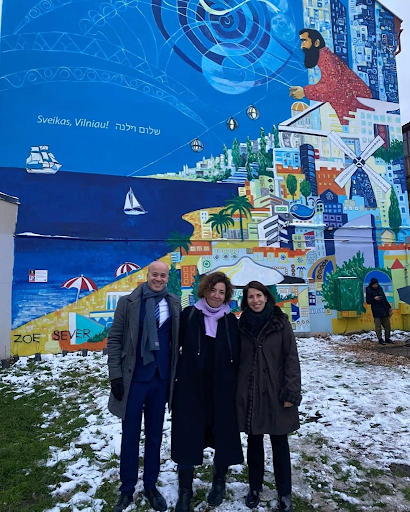 Vilnius Mayor Remigijus Šimašius also spoke at the inauguration, noting that “this lovely gift brings a ray of light and color that stands out against the background of the cold and snowy weather.” He also expressed hope that Vilnius will soon have a square named after Jerusalem.

During her visit, Sever, who was born in Ukraine and emigrated to Israel as a child, visited a refugee center with Deputy Chief of Mission to Lithuania Erez Golan. She offered an art workshop for Ukrainian refugee children with the support of the Israeli Embassy, which provided the art supplies. The children painted drawings to send to Ukrainian soldiers at the front.

The Deputy Ambassador of Ukraine in Vilnius Viktor Hamotskyi and other Ukrainian officials also attended the visit.

During her time in Vilnius, Sever met with the head of the Vilnius Academy of Arts and discussed the possibility of organizing an exhibition of her artwork next year.