Analysis: Should Trump trust the CIA about Russian election hacking?

One thing is clear: Some CIA heads will roll once Trump takes over. 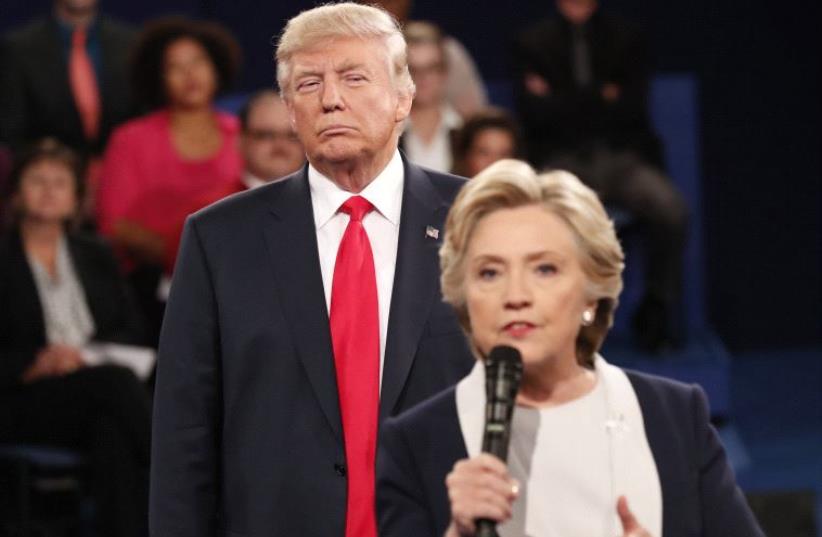 Trump and Clinton
(photo credit: RICK WILKING/REUTERS)
President-elect Donald Trump is still five weeks from the Oval Office and there is already a clear break between him and the CIA.The question is, how far does this break go and should Trump trust the CIA’s findings that Russia tried to interfere in the election in order to assist him?
The Washington Post reported last week that the CIA found that Russia intervened in the elections to help Trump. Their conclusion was based largely on the finding that Russia had hacked emails of both the Democratic and the Republican national committees, but only released damaging information about Hilary Clinton.
This came after the entire 17-agency intelligence community, along with independent cyber firms, had already concluded – before the election – that Russia was involved, although without assigning a motive at the time.Trump and his campaign have attacked all of the findings.To answer whether Trump should trust the CIA now, and why there is any question of trust, it is important to go back to the first signs of the Trump-CIA gap.Since his election, Trump has not taken the daily special presidential intelligence briefings. Rather, he has only accepted around one briefing per week.He has been criticized for keeping the CIA at a distance. That said, accusations that he is the first president-elect or president to not receive daily briefings, or to have some skepticism about the CIA, are inaccurate.Richard Nixon did not receive daily briefings while he was president, and reportedly returned materials sent to him by the CIA in unopened envelopes.George W. Bush and his vice president Dick Cheney intervened within the CIA’s process of findings, and sent Porter Goss in as director to change the agency’s orientation to be more to their liking.As president-elect, Bill Clinton skipped many daily briefings.Barack Obama completely reoriented the agency away from Bush-era “war-on-terror” policies, banning many of interrogation and extraordinary rendition policies it had used.So neither Trump’s ignoring CIA briefings, nor his differing with the agency’s views are unprecedented.What may be unprecedented is his blanket dismissal of the CIA’s findings of Russian interference in the election.The CIA findings seem like sound inferential thinking. And they reflect leaks that came solely and constantly from the Democratic Party side during the election. But inference is not proof.If Russia was involved, it seems they used Wikileaks as their dumping ground.Some now consider WikiLeaks to be a Russian-controlled agency. But assuming it is independent, we do not know whether WikiLeaks decided what to post and what not to, and whether they had leaks from the Republican side that they held.This sounds like a stretch, but the FBI, in its briefings to members of the US Congress, was reportedly more qualified in what conclusions to draw from Russian involvement.Some observers believe Russia was involved primarily to sow chaos, to undermine expected president Hillary Clinton’s stability, and that the Russians never believed Trump could win, anymore than anyone else did.Trump’s campaign hit the CIA hard, saying it was the same organization that wrongly said Iraq had a concealed nuclear weapons program in 2003. That accusation is debatable, as the CIA has had plenty of changeover since 2003, and there is evidence that many CIA staffers in 2003 were unconvinced about Iraq but were dragged along by Bush and Cheney.But US Senator John McCain’s more moderate criticism – that the CIA has gotten some big things wrong in assigning motivations – has plenty of support, though he accepts the wider intelligence community conclusion that Russia was involved.In that case, what is so unusual about Trump’s response, is that he is still denying any Russian involvement – whatever the motivations. So should Trump retreat to where some other Republicans are, at least accepting that Russia was involved, even if he disputes the motivations?In fairness to Trump, there are extenuating circumstances, even on the broader point.Admitting to Russian involvement undermines his legitimacy. Of course, Obama and the CIA’s point is that they do not challenge Trump’s win, and they are focused on this merely as a national security issue.None of this gives a decisive answer as to how Trump should respond to the CIA finding.One thing is clear: Some CIA heads will roll once Trump takes over. Perhaps later, when he feels more secure, there will also be a quiet acknowledgment from a low-level Trump staffer that the original CIA conclusions, while not 100% certain, held more water than he currently admits.