By BEN HARTMAN, YAAKOV LAPPIN, TOVAH LAZAROFF
Tapuah attack 370
(photo credit: Courtesy, Magen David Adom)
Advertisement
A father of five from the settlement of Yitzhar was stabbed to death in a terror attack at the Tapuah Junction in Samaria on Tuesday morning, in the first lethal terror attack in the West Bank since 2011.Following the murder, settlers rioted and attacked both Palestinians and Israeli security forces in the West Bank.The Palestinian terrorist, Salam Azal, came up from behind the victim, Evyatar Borovsky, stabbed him in the chest and stomach, and stole his firearm. A Border Police officer who witnessed the attack opened fire on the terrorist and moderately wounded him. He was taken from the scene to Beilinson Medical Center in Petah Tikva for treatment, while Borovsky was treated at the scene but died of his wounds.Capt. Barak Raz of the IDF’s Judea and Samaria Division told The Jerusalem Post on Tuesday that it had been more than a year since an Israeli was killed by terrorism in the West Bank, despite some violent incidents – including a rock-throwing attack on an Israeli vehicle that critically wounded three-year-old Adele Biton, who is still fighting for her life in a hospital.“This reminds us that even in times of relative calm, the alertness and quick response by security forces is very necessary. We are working 24 hours a day to maintain this stability,” he added.Soon after the attack, Col. Yoav Yarom, head of the Samaria Regional Brigade, and Brig.-Gen. Tamir Yadai, commander of the Judea and Samaria Division, arrived on the scene to oversee the investigation.Prime Minister Binyamin Netanyahu responded to the attack on Tuesday, saying, “I would also like to express my condolences and those of the entire country to the family of Evyatar Borovsky. The terrorist who perpetrated the murder has been captured, and we will continue to act on this front as well in order to defend our citizens.”Azal is from the village of Shuka, near Tulkarm in the West Bank. He was released six months ago from an Israeli prison after serving a sentence for rock-throwing. 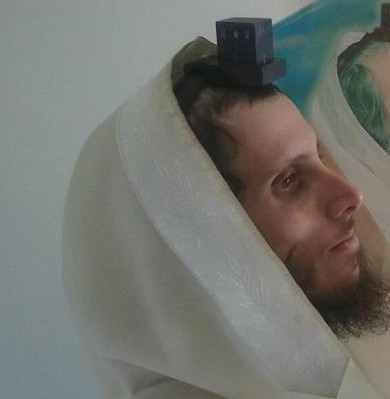 Terror victim Evyatar BorovskyHis brother is reportedly serving a sentence in a Palestinian Authority jail for charges of collaborating with Israel, and there is some suspicion that Azal carried out the attack to clear the family’s name in the wake of his brother’s conviction.Shortly after the attack, violence broke out between settlers and Palestinians, and between settlers and soldiers in a number of spots near Yitzhar.Outside the entrance to the settlement, settlers threw rocks at soldiers and burned tires, while near the Palestinian village of Urif, some 50 settlers clashed with 100 Palestinians in an incident that included rock-throwing by both sides.Other clashes broke out between settlers and Palestinians near the village of Ein Abus.By the Yitzhar Junction, near the village of Harawa, 40 settlers threw rocks at cars and at a bus carrying children, according to the IDF. The bus driver was lightly wounded, and two children suffered from shock, according to the IDF.Settlers also lit a fire at the junction, which the IDF extinguished.Idan Iluz, a spokesman for the Border Police, said that 10 settlers – both minors and adults – had been arrested during the rioting, with some accused of torching fields, blocking roads and throwing rocks, including at Israeli security forces.He did not know how many Palestinians were hurt in the rioting, but reports in the media stated that a number were wounded by rock-throwers.On Tuesday evening, settlers also held a small demonstration at the Tapuah Junction, where they called on the government and the IDF to take steps to prevent further attacks like the one that took Borovsky’s life.Avraham Benyamin, the spokesman for Yitzhar, said Tuesday that Borovsky was a native of Kfar Hassidim who had been living in Yitzhar with his wife and five children for five years.Benyamin said Borovsky had been a stage actor in a number of performance troupes and served on Yitzhar’s security team.In response to the murder, Benyamin said on behalf of the settlement that “the writing was on the wall, written in blood. This murder was a direct refusal of the government’s leniency toward rock-throwing terrorism and the continued increase in terror attacks against Jews across Judea and Samaria.”He added that the settlement demands a “painful and serious response to erase the shame of this incident and in order to show the residents that their lives are not worthless.”