Alanis Morissette plays like she oughta know in TA

By HADAS PARUSH
Canadian musician Alanis Morissette performs [file]
(photo credit: Marcos Brindicci / Reuters)
Advertisement
A varied crowd lined up outside the Nokia Arena on Monday night to see Alanis Morissette’s first concert in Israel since 2000. Despite social media threats demanding that she boycott Israel, the 38-year-old Canadian-American singer-songwriter performed to a sold-out crowd on Monday night in Tel Aviv.In contrast to several performances cancelled in light of international political pressures, most recently by singer Cat Power and musician Stevie Wonder, Morissette stuck to her planned tour stop in Israel. Her concert comes just a couple of weeks after the end of clashes between Israel and Gazan terrorists during the IDF Operation Pillar of Defense, which drew worldwide criticism.Throughout her performance, Morissette expressed support to the Israeli people, and at some point in the concert the band organ played the traditional Hebrew song, “Hine Ma Tov" (Here Is What’s Good) which the audience immediately recognized and sang along to.A mostly adult crowd, it was clear that fans from her Jagged Little Pill days dominated the audience, rising from their seats and singing along to classic tracks such as "Ironic," "You Learn," and "Head Over Feet." Her performance of "You Oughta Know" drew the loudest participation from the audience, which knew each and every single word to one of her most popular songs, from her best-selling album. Seventeen years after the track was originally released, Morissette still performed the song with the same passion and venom she was known and admired for.
While some fans at the front of the stage were waving Canadian flags, the rest of the audience lit up with their cellphones recording the event and moving them from side to side like candles to the slower songs she performed, most notably "Mary Jane." 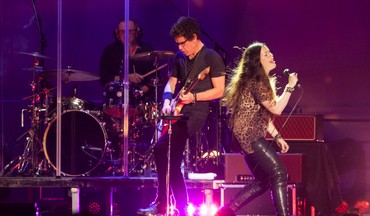 Alanis Morissette performs in Tel Aviv (Guy Prives)Still sporting her signature long hair, she energetically swung it around while rocking out to the end guitar solo of her late-90’s track, "Uninvited."Not a moment in her concert conveyed the passage of time, as the married mother of one performed her greatest hits, taking the audience back the the 90’s with her familiar slightly-trembling, rolling voice.Morissette made sure to visit the Western Wall in Jerusalem a day before her Tel Aviv performance, while touring the Holy Land with her husband, rapper Mario 'MC Souleye' Treadway, who was also her supporting act throughout her tour.Morissette last played in Israel in 2000, shortly after the release of her album, Supposed Former Infatuation Junkie. She has now been on tour since June to promote her August 2012 album, Havoc and Bright Lights, and came back to Israel to end her seven-month Guardian Angel world tour.The concert came to an appropriate end with the song, "Thank You."“It’s been a great 2012, Morissette told the audience in Tel Aviv, adding that “we love you, we’re with you, America, Canada, all of us.”
Advertisement
Subscribe for our daily newsletter