By ARYE GUT
OCTOBER 24, 2017 02:21
Advertisement
No country in Eurasia has closer or warmer ties with Israel than Azerbaijan. The relationship between the two countries is particularly surprising because Azerbaijan is a majority- Muslim country. However, the reasons for this close relationship lie in the longstanding friendship between Azerbaijanis and Jews living in Azerbaijan. Unlike many cultures, Azerbaijanis have never viewed Jews as foreign or alien. Israel has always been attracted to Azerbaijan, not only because there is no anti-Semitism in that country but also because Baku has repeatedly denounced manifestations of anti-Semitism elsewhere.

Azerbaijan is working to increase the number of tourists from State of Israel. Israeli travelers are regarded as the biggest contributors to the global tourismmarket.
Azerbaijan, in the Caucuses region, is a country that straddles both Eastern Europe and Western Asia, so expect a clash of East meets West and you will find a lot to enjoy here. Located on the Caspian Sea, there are quaint subtropical seaside resorts, or you can embrace Azerbaijan’s name as the Land of Fire with a trip to a flaming mountain or a mud volcano. Azerbaijan has much to offer visitors at the crossroads of Europe and Asia.
Azerbaijan, also called the Land of Fires, is blessed with ingredients that will create good memories for tourists, including natural scenery, people, a historically rich religious diversity, interesting cities to explore, unusual foods, exotic fruits, opportunities to bring home great memories purchased here, and above all, safety in the country. Mountains, forests, farmlands, coastal areas, and nine out of a possible eleven distinct climate zones from subtropical to alpine climates provide Azerbaijan with a broad range of natural environments that can be used to develop a range of tourism activities and to attract a diverse group of tourists.

Image result for baku shopping festival
New challenges emerging from sharp decline of oil prices at global market made authorities in Azerbaijan to take certain measures on economic development. In this regard, the main goal is focused on increasing economic growth dynamics and supporting current economic potential by new economic reforms and improving non-oil sector.  So, one of the main steps taken in this direction is Shopping Festivals held in the country twice in a year. These Shopping Festivals are held in accordance with the decree signed by the President of the Republic of Azerbaijan, on 1 September 2016 under the title of the Additional Measures aimed at the development of tourism in the Republic of Azerbaijan and the approved Strategic Roadmap for Development of Specialized Tourism Industry. 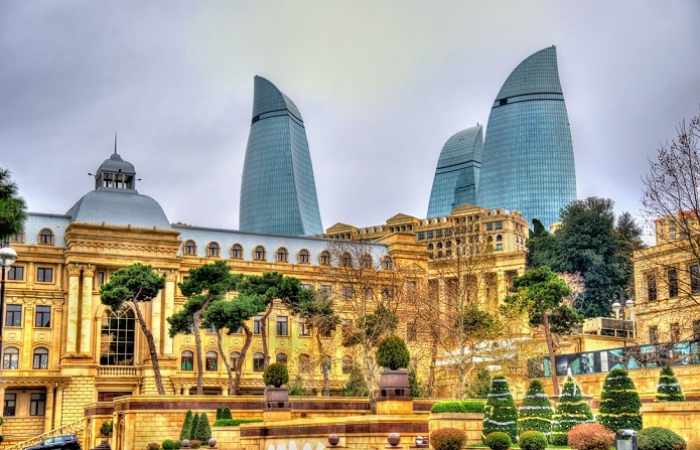 Image result for baku shopping festivalThe first Shopping Festival was held in Baku on April 10-May 10. The second Festival has already begun on October 15 and will last till November 15. During a month the Festival will bring together over 540 commercial institutions to serve the customers. Most of such stores and service centers will offer beneficial shopping opportunities for both tourists and local customers by joining to the VAT refund system. At the same time, the Festival visitors will enjoy numerous surprises and entertaining events. 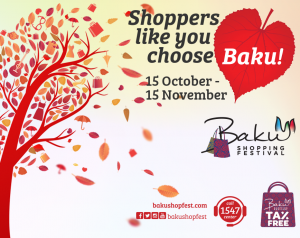 Baku | organizatorių nuotr.
Official partners of the Baku Shopping Festival are the Ministry of Taxes of the Republic of Azerbaijan, the Azerbaijan Airlines (AZAL), the State Agency for Public Service and Social Innovations under the President of the Republic of Azerbaijan (ASAN Service) and AzerTurkBank.
This Festival will offer innovations for its visitors. For the first time, supermarkets have also decided to join the Festival. Furthermore, several drugstores will also participate at the Festival.

Related imageThe Baku Shopping Festival will prepare a Tourist Package and present it to travel agencies. It will include air ticket, transfer, insurance, hotel accommodation and the organization of shopping tours to the Festival stores. At the same time, customers will also obtain special gift cards as well as special lottery and discount vouchers.
To welcome their tourists and customers, trading centers and malls will entertain them with interactive games and interesting Fan Zone to be installed and available on the Fountains Square during the entire period of the Festival.

Image result for torgovaya bakuTo attract more tourists to Azerbaijan and stimulate shopping among tourists and local residents during the Festival, various events will take place in the framework of the Shopping Festival. The collaboration between the Azerbaijan Convention Bureau, Azerbaijani Airlines (AZAL) and some 4-5 star hotels brings a brilliant opportunity to benefit from tour packages from 10 cities to Baku based on affordable prices that will be far below the market prices. Using such packages, visitors will not only do shopping during Festival and use Tax Free system, but also have an opportunity for very interesting cultural and entertainment tours and programs.
Detailed information about destinations and hotels offered within such tours is given in the table below.
The mentioned tours include insurance, transfer to hotel and shopping.
More detailed information can be obtained by dialing +99455 253 63 45 or received at info@azcb.com
Detailed information on the Baku Shopping Festival and its organizers can be contacted by following phone number and email: 0124982063
E-mail: media@bakushopfest.com
Web: www.bakushopfest.com
For media: http://bakushopfest.com/for-media-inquiries/
Advertisement
Subscribe for our daily newsletter