Spotlight on cooperation between the Technion and Bank Hapoalim

The institute focuses on innovative research in Health Tech and Connective Media. 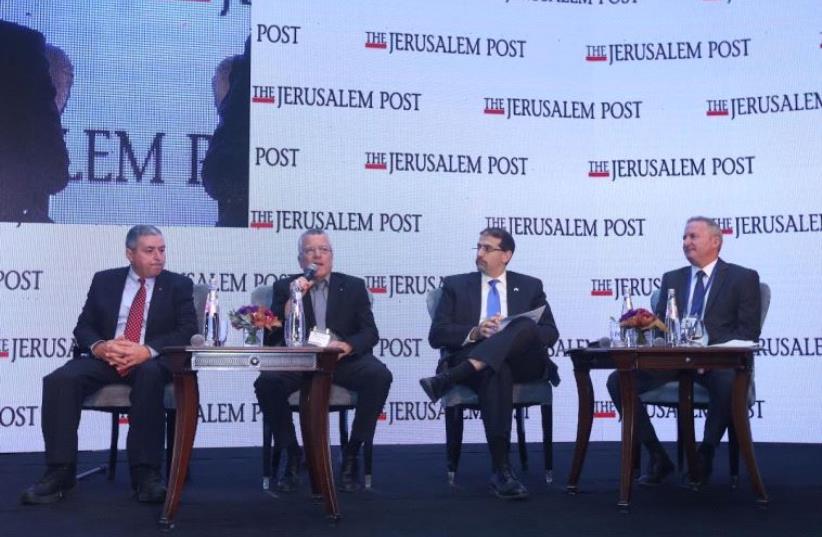 US Ambassador Dan Shapiro and a panel spotlighting the new partnership between Technion, Cornell University and Bank Hapoalim.
(photo credit: MARC ISRAEL SELLEM)
US Ambassador Dan Shapiro arrived at the Jerusalem Post Diplomatic Conference on Wednesday and participated in a panel spotlighting the new partnership between Technion-Israel Institute of Technology, Jacobs Technion- Cornell Institute and Bank Hapoalim.“I congratulate Cornell University, the Technion, Bank Hapoalim and the City of New York.This Cornell and Technion partnership with Bank Hapoalim is the cutting edge for what is possible for the future of the US-Israel partnership in years to come,” said Shapiro who concluded the panel.Israel’s largest bank, Bank Hapoalim, began a unique partnership with the Jacobs Technion-Cornell Institute in New York this year in a bid to define the future of innovation in financial technologies (FinTech) and data science.“I’m excited because we are doing something revolutionary together, something that can be adopted and executed all over the world,” said President and CEO of Bank Hapoalim Arik Pinto. “Our partnership with this institution is a win-win since it will grant the bank access to researchers who accelerate the field and will produce top industry experts in the financial and technical fields.”“We’re designing together the banking industry of tomorrow,” said Pinto. “The speed of the change in all aspects of innovation is getting increasingly faster and we must lead in innovation and not just adapt to it.”The Cornell-Technion joint bid won a New York City competition to create an Applied Sciences graduate school back in 2011.Then in 2013, Dr. Irwin Mark Jacobs, founder of Qualcomm and CEO emeritus, and his wife Joan gave $133 million to the joint academic initiative, subsequently establishing the Jacobs Technion-Cornell Institute.The institute focuses on innovative research in health-tech and connective media. The first class, consisting of 12 individuals from six different countries, graduated in May with degrees from both Cornell and the Technion. The institute will move to the new Cornell Tech campus, on Roosevelt Island, New York, in 2017, a new campus being constructed specially for the Jacobs Institute.“At the core of the partnership is data, it’s all about data,” explained Vice President of the Technion Professor Boaz Golany.“From day-one, banks relied on data. But in today’s digital era, banks face tremendous challenges and I believe that Bank Hapoalim is the first one – first in Israel certainly – to understand this challenge. We are looking forward to the relationship between our researchers and the bank experts.”Golany referred to the Brexit in the UK and the outcome of the recent election in the US and said: "collaborations must be SMART -- that is Sustainable, Mutually Attractive, with Reliable partners an Transparent. In both the UK and the USA, the pushback against international collaboration is a result of people not seeing the benefits they gain from such collaboration".  He then described the the Technion partnership with Cornell University and emphasized that it has all the SMART ingredients. Golany then described the collaboration between Technion and Bank Hapoalim in establishing a FinTech lab at the Technion and expressed his hope that Hapoalim will soon become also a partner to the Jacobs Technion Cornell Institute in New York.  "We look forward to work with the bank's experts and use the vast data that the bank will share with us to advance our knowledge in the FinTech areas and develop new and exciting instruments for everyone involved" he concluded.  The Jacobs Institute deals in all stages of big data technologies, from gathering to storing and analyzing. Data science is a new academic field dealing with the creation of valuable information and reaching conclusions and understanding from huge databases with the help of advanced statistical models, techniques of data mining and analytical prediction.