The Israeli company, eVigilo, specializes in mass-notifications and has been using its innovative technology to save countless lives. 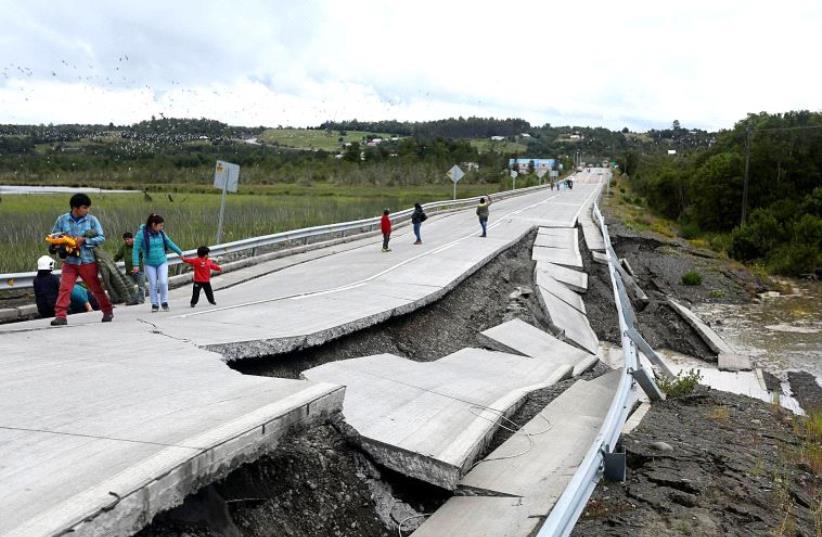 People inspect damage caused on highway 5 south on Chiloe Island off the Pacific coast of southern Chile, by a 7.7-magnitude earthquake on December 25, 2016
(photo credit: ALVARO SANTA ANA/ATON CHILE/AFP)
An Israeli company, eVigilo, is behind Sunday’s mass evacuation from an earthquake in Chile, which likely saved thousands of lives from the temblor and subsequent tsunami that hit the country’s southern coast.After a 7.7-magnitude earthquake was registered on Sunday by Chile’s naval oceanographic service, Chile’s National Emergency Office ordered an evacuation of more than 4,000 residents and tourists from the nearby coastal areas in anticipation of a potential tsunami. The timely warning and evacuation alert were issued via the software platform of Netanya-based eVigilo to thousands of cellphones in the threatened area.“Our company specializes in mass notification and we have the ability to spread countless messages in seconds through any platform with a digital signal,” eVigilo CEO Lior Shalev told The Jerusalem Post. “Our platform is especially suitable for emergency situations and national crises. We have the ability to receive real-time signals from various sensors and convert them to different types of alerts – from cellular notifications, to activating sirens or taking over television broadcasts – in accordance with the client’s needs.”According to Shalev, eVigilo – founded in 2009 – aspires to provide a life-saving solution to the alarming increase in rocket fire directed at Israeli civilians from the Gaza Strip. After going through rigorous testing by the IDF that far exceeded industry testing benchmarks, the company’s software was introduced into the IDF Home Front Command.“All the alert systems used by the IDF Home Front Command today, including their official app, are ours. A similar system was installed in Chile by us in 2012, following a 8.8-magnitude earthquake that hit in 2010 and a tsunami that claimed the lives of more than 560 individuals,” Shalev told the Post.According to Shalev, Chilean President Michelle Bachelet issued a government tender following the 2010 catastrophe for companies offering solutions that would minimize the casualties of natural disasters. With the help of an Israeli businessman living in Chile, eVigilo applied for the government tender and won the bid.Two years after the deployment of eVigilo’s system in Chile, an 8.3 Richter scale earthquake hit the country. This time, due to early warning, the disaster claimed the lives of only five victims. According to Chile’s National Emergency Office, Sunday’s earthquake ended with no reports of deaths or injuries, and the tsunami warning has since been lifted.“The messages went out in time,” was the first thing that Bachelet said in a press conference after the tsunami. To Shalev, this is a testament to eVigilo’s credit and proof that their solution saved lives.“Our software gets signals from sensors – in Israel these are IDF sensors that detect launches made in Gaza; in Chile these are underwater seismic sensors – and knows how to analyze them at high speed. It then decides which areas are under threat and issues mass alerts to anyone within the danger zone,” Shalev explained.According to eVigilo, this ability to make distinctions between geographic areas and even municipal precincts that are at risk and those that aren’t also saves governments, municipalities and authorities money and resources. Knowing what can happen, when and exactly where helps in faster recovery and allows for better control of the authorities’ time and resource allocations.“You don’t want to alert anyone who isn’t under threat so as to avoid ‘boy who cried wolf’ scenarios in the future. In Israel, they used to activate the sirens for an entire city, sending everyone to the shelters, but now, they know exactly which neighborhoods and zones to alert. Yesterday in Chile, the seismic warnings were applicable only to the southern coastal strip, and so only people who were there got the alerts,” Shalev said.Since its establishment and proven field results in Israel and Chile, eVigilo has gained significant recognition by the international community. The Israeli company was selected by the EU Commission to co-develop a multi-channel alert system for tsunamis in Europe.