IDF chief Gantz: Only a handful of states have more firepower than Hezbollah

Gantz says conflict in Syria could continue for more than a decade; warns that both Hezbollah and World Jihad gaining strength in Syria. 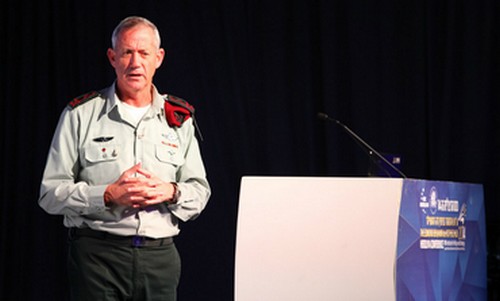 Photo: EREZ HARODI - OSIM TSILUMIDF Chief of Staff Lt.-Gen. Benny Gantz said Monday that only a handful of states have more firepower than Hezbollah.Speaking at the Herzliya Conference at the Interdisciplinary Center, Gantz said, "Show me four or five states with more firepower than Hezbollah: the US, China, Russia, Israel, France, the UK." Gantz said that Syria was falling apart "like a house of cards," and no outcome was good for Israel."You have two very problematic phenomena happening at the same time. The radical axis led by Iran is getting stronger. Iran is investing a lot in Hezbollah and Syria. At the same time, World Jihad elements in Syria are getting stronger."Gantz stated that as long as Bashar Assad remains in power in Syria there is unlikely to be a solution. He said that he envisions "decades of conflict in the Syrian arena, perhaps more."The IDF chief outlined the other security challenges facing Israel and the changes the IDF is enacting to face a new type of unconventional military threat."On the one hand, the threat of militaries has not disappeared - but under houses and underground there is an attack capability," he said in reference to Hezbollah's arms in Lebanon.Ahead of its next clash with Hezbollah, Israel must be wary of the Lebanese terrorists' combat experience gained in Syria, Gantz warned."Hezbollah, while tied up on three fronts, is gaining operational experience - that we will meet on the front," he stated.The IDF chief added however that "Hezbollah knows it would be set back decades by the damage Israel would wreak on it and Lebanon in a future war."Gantz said in Gaza a dramatic armament of mid-long range rockets is taking place as well. However he stated that Gaza also understood the price of war with Israel.He stated that Iran has not given up its nuclear vision. While a diplomatic solution is preferred to prevent a nuclear Iran that will destabilize the region, force will have to be used if necessary, Gantz added.