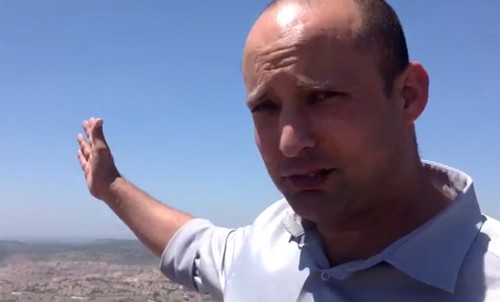 Israel will gradually annex Area C of the West Bank now that the negotiations with the Palestinians have failed, Economic Minister Naftali Bennett said on Tuesday afternoon.“We will be gradually attempting to apply Israeli law on Israeli controlled areas of Judea and Samaria,” Bennett told reporters as he stood in the Gush Etzion settlement of Neveh Daniel and looked out at the surrounding green and brown hilltops.Bennett blamed the break down of the talks on the unity deal between Fatah and Hamas. “The cabinet has taken a unanimous decision not to negotiate with a government that includes Hamas,” Bennett said. “I have heard voices from over the ocean, including Europe that call on us to negotiate with this kind of government,” he said. “It is like asking the United States to negotiate with a government that includes al-Qaida. It won’t happen,” he said.He spoke exactly on the day that the nine-month period of negotiations with the Palestinians officially ended. The talks themselves broke down last week. “The era of Oslo is over and we are entering a new era of realism. That means we invest massively in joint infrastructure for Arabs and Jews in Judea and Samaria,” Bennett said.“We provide the Palestinians with autonomy on steroids,” he said in reference to Areas A and B of the West Bank, which are now under the civil control of the Palestinian Authority.Bennett explained that Palestinians in these areas,  “will govern themselves, we have no desire to control them.”In the past Bennett has said that Palestinians living in Area C of the West Bank should be given Israeli citizenship. While in Gush Etzion, he said, he visited places where Palestinians and Israelis work together in joint businesses.“That is the future, coexistence, economic peace and then gradually it will create real peace,” Bennett said.