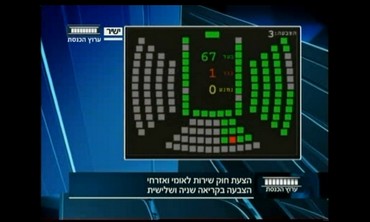 The Knesset voted the coalition’s haredi (ultra-Orthodox) conscription plan into law Wednesday morning, with 67 in favor and one opposed.The opposition boycotted the vote. Bayit Yehudi MK Yoni Chetboun lost his position on the Foreign Affairs and Defense Committee and will be suspended from submitting bills for six weeks as punishment for voting against the coalition.“This is a historic, important bill,” MK Ayelet Shaked (Bayit Yehudi), who led the Knesset committee that prepared the legislation, declared. “For 65 years there was an exemption for all yeshiva students, and the change the coalition made is proportionate and gradual and correct.”Shaked said she “believes in the haredi public and that it will reach the [enlistment] goals the government set. If there will be cooperation from haredi leadership, there will not be mandatory conscription.“I imagine this law will already reach the High Court by tomorrow. I hope the judges will read the protocols of the committee meetings and see that even if the law [does not result in] equality, it has a worthy goal, which is why I think it will stand the test of the High Court,” she said.Immediately after the bill passed, the Movement for Quality Government petitioned the High Court of Justice against it.The law has been criticized for giving all haredi men over the age of 18 on the day it was passed, Wednesday, exemptions from military service, either immediately (for those over 22) or in the coming years (for those now aged between 18 and 22).The Movement for Quality Government submitted a petition to the High Court asking it to order the government to explain why the court should not annul the conscription law owing to “the harsh, illegal, unequal and disproportionate harm the law does to the fundamental rights enshrined in the Basic Law: Human Dignity and Liberty.”The law has also been heavily criticized by leading experts on haredi society, who fear it will be ineffective in increasing haredi participation in military service.Last week, a group of 30 analysts of the haredi community said that the legislation, which provides for the imprisonment of any yeshiva student refusing to serve, would lead to a halt in the integration of the community into national service.“The criminal sanctions proposal will not achieve [draft] equality but will instead make it more distant, bring about a halt in the integration of haredim into the military, lead the state to societal division and could bring endless trouble,” they warned.Following the vote, Economy Minister Naftali Bennett (Bayit Yehudi) tweeted, “Now we must roll up our sleeves and connect our haredi brothers to the economy and Israeli service. The time has come for unity.”In a video Bennett posted online in English, he said: “It is a unique privilege to be able to defend ourselves, by ourselves.We waited 2,000 years to defend our own country and now it’s happening.”Education Minister Shai Piron (Yesh Atid) called military and civilian service “a symbol of our togetherness, of nationalism, of Zionism. Avoiding them is separating from Israeli society. Many young people associate strict Judaism with not fulfilling public responsibilities, which leads to alienation from our roots and traditions. This is an invitation for a dialogue on Torah and work, on army and yeshiva, on faith and country.”“To the 543,458 citizens of Israel who voted for Yesh Atid: Today we brought you equality in the burden of service,” Finance Minister Yair Lapid, the party’s chairman, wrote on Facebook.Haredi lawmakers reacted furiously to the passage of the law.The often acerbic MK Yisrael Eichler of United Torah Judaism denounced it and said its purpose was to destroy the ultra-Orthodox lifestyle.“The government of heretics has no right to impose its evil culture on those of the Jewish religion,” Eichler said. “The Likud and its assimilated and nationalist partners have become the spearhead of anti-religious coercion, in the service of the High Court of Justice and the Reform [Movement], to uproot the Torah.“There is one goal to their coercive laws: to draw the youth of Israel to an evil culture. They have the weapon of dictatorial rule and they do not hesitate to use it,” Eichler said.“Foreign rule would be preferable to Jewish rule that fights to uproot the Torah and persecutes those who study it,” he said.The haredi rabbinic leadership kept up its ferocious attack on the national-religious community and the Bayit Yehudi party.Rabbi David Yosef, son of the late Shas spiritual leader Rabbi Ovadia Yosef and himself a member of the Shas Council of Torah Sages, spoke out harshly against the national-religious community following the passage of the haredi conscription law.“There’s no doubt, the Mizrahi [a term for religious Zionism] is the big enemy of Judaism, the hatred of the rabble for the Torah scholar,” the Kikar Hashabbat haredi website recorded Yosef as saying to fellow council member Rabbi Shalom Cohen.At a bar mitzva celebration on Tuesday, Yosef was recorded by the haredi site B’hadrei Haredim describing the national-religious movement as “haters of the Torah, our greatest enemies.” Former UTJ MK Meir Porush said “there will be no forgiveness for this government,” and decried what he said were the undemocratic means used in passing the legislation.“We will never forget that which the Netanyahu-Lapid-Bennett government imposed on Torah students. We will never forgive the leaders of this awful desecration of God’s name which they created with their own hands,” Porush said.