By Gil Stern Stern HOFFMAN
SEPTEMBER 28, 2011 01:18
Netanyahu and Obama in New York(good)_311
(photo credit: Reuters)
US President Barack Obama succeeded in reaching out to Israelis with his speech last Friday to the General Assembly and his efforts to block the UN from unilaterally declaring a Palestinian state, according to a Keevoon Research poll sponsored by The Jerusalem Post this week.When asked about the Obama administration’s policies, 54 percent said they were more favorable toward Israel, 19% said they were more pro- Palestinian, and 27% called them neutral.RELATED:
Analysis: Obama tells Israelis what they’ve been waiting to hear
Analysis: Obama's land swap surpriseThe survey of 506 Hebrew-speaking respondents over the age of 18 representing a sample of the Jewish population in Israel was conducted on Sunday and Monday by Keevoon in conjunction with the Mutagim online service. It had a margin of error of 4.5 percentage points.The poll cannot be compared to previous Post-sponsored polls, which were conducted by telephone by Smith Research using different methodology. 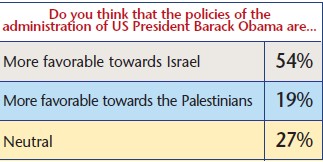 The last Smith poll, published on May 27 following a high-profile Obama speech to the American Israel Public Affairs Committee, found that just 12% of Israeli Jews considered the Obama administration’s policies more pro-Israel, 40% said they were more pro- Palestinian, 34% said neutral and 13% did not express an opinion.In the Keevoon poll, Israelis who intend to vote Kadima, Labor, or Shas in the next election were more likely to call the Obama administration’s policies more pro-Israel. Voters of Israel Beiteinu, the National Union, Habayit Hayehudi and United Torah Judaism were less likely to do so. Women were more likely to consider Obama pro-Israel than men, with 64% of women saying as much and only 43% among men.“President Obama’s speech at the UN had a very big impact on Israelis,” Keevoon director Mitchell Barak said. “He clearly stated support for key elements of the Israeli position while avoiding articulating some of the controversial US positions that divide Israelis. For Israelis, his speech at the UN was as much about what he didn’t say as it was significant for what he did say. The active role of the US in blocking a Palestinian state at the UN was also a significant turning point for how Israelis perceive the Obama administration.”Barak also singled out the appointment of new US Ambassador to Israel Daniel Shapiro, who is Jewish, speaks Hebrew, and has reached out to the Israeli population to explain Obama’s positions.The poll also asked whether respondents view Prime Minister Binyamin Netanyahu, Foreign Minister Avigdor Lieberman, opposition leader Tzipi Livni and new Labor leader Shelly Yacimovich favorably.Fifty percent said they viewed Netanyahu favorably and 45% unfavorably, while 5% did not know.The prime minister did especially well among Likud voters, with 85% viewing him favorably.He did better among Sephardim (67%) than Ashkenazim (41%).Lieberman was viewed favorably by 47% and unfavorably by 46%. The immigrant from Kishinev in what is now Moldova surprisingly also did much better among Sephardim than Ashkenazim.Yacimovich fared the best out of the politicians, with 56% seeing her favorably and 26% unfavorably. A relatively large proportion – 18% – had no opinion of her.Livni was the only one of the leaders of the four largest parties who is viewed unfavorably by the general public. While Netanyahu, Lieberman and Yacimovich all had positive ratings, 39% viewed Livni positively and 50% negatively.If an election were held now, Likud would remain the largest party, rising from 27 to 32 Knesset seats, Labor would rise dramatically from eight to 26, and Kadima would fall from 28 to 18.Barak said Russian immigrants and the ultra-Orthodox were under-represented in the survey, which could explain why Israel Beiteinu, which other polls predict will rise from its current 15 seats, received only 10 in his poll.If an election were held now, Shas would win nine seats, Meretz six, Habayit Hayehudi five, National Union four, United Torah Judaism four, and a new social welfare party would win four seats.The fact that only Jews were polled resulted in no seats for any Arab party.