Does it sound too good to be true, chocolate may actually be good for you? Find out how much of this scrumptious rumor we can really trust and how much is just a sweet lie.

By KATHRYN RUBIN
FEBRUARY 16, 2011 12:45
Chocolates
(photo credit: Courtesy)
Advertisement
Valentine’s Day has come and gone. The roses from a loved one will soon wilt away as quickly as the stores will take down their pink and red decorations; but one thing will not go away so swiftly – chocolate! From creamy white, to fruits and nuts, to peanut butter swirl, chocolate, in its many shapes and forms (and even the classic V-day heart) will stay with us for the remainder of the year. Once considered a rather unhealthy indulgence, a few years ago rumors began circling that chocolate may not be so terrible after all. In fact as time went on, more and more studies proved that chocolate may physically have a special place in our heart, as some chocolates provide certain health benefits such as lowering blood pressure and LDL "bad" cholesterol. RELATED:
Healthy Eating: Food synergy
Healthy Eating: The skinny on fats The force of the cocoa bean Flavonoids - naturally-occurring polyphenolic compounds responsible for given flowers and plants their vibrant color - shield plants from environmental toxins and help repair the damage caused by these pollutants.  When we eat foods rich in flavonoids we also benefit from their antioxidant properties. 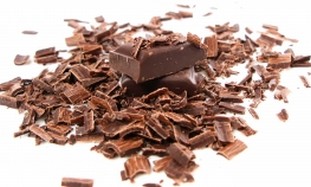 Chocolate FlakesSo what exactly are antioxidants? In short, they help our cells repair and resist damage caused by free radicals –small molecules produced during normal metabolic processes (such as breathing) as well as by environmental toxins, such as cigarette smoke and air pollution. Excess free radicals in our body can harm our cells and their components (including DNA). Furthermore, when our bodies lack sufficient levels of antioxidants, damage from these free radicals can lead to increased levels of LDL cholesterol oxidation which causes plaque formation on our artery walls. Flavonoids, a group of compounds that have an antioxidant effect, neutralize these free radicals, thereby reducing the damage that they cause. Flavonols are the main type of flavonoid found in cocoa. In addition to their antioxidant qualities, flavonols (which contain epicatechin  and catechin) have many other positive effects on our vascular system, including: lowering blood pressure, improving blood flow, preventing blood clots, regulating inflammatory and immune responses in our blood vessel and preventing the oxidation of LDL cholesterol.Sounds great right? Not exactly, as not all chocolate is created (or processed) equally.The power of the dark sideSo before you go indulge in your favorite chocolate candy bar or sink your teeth into a decadent slice of devil's food cake, it’s important to understand that not all chocolate contains high amounts of flavonols – in fact some chocolate contains none at all. Naturally, cocoa beans have a very strong bitter taste – resulting from these flavonols.  So to make sweet chocolate treats, the pungent taste of the cocoa is removed – meaning that 60-70% of the flavonols, along with the majority of their health benefits are also lost.  Most of us consume processed chocolate loaded with undesirable ingredients (i.e. sugar, corn syrup, milk fats and hydrogenated oils) and where the actual cocoa content is less than 20%. However, research has shown that in order to reap any health benefits from chocolate, we need to consume chocolate that is at least 75% cocoa (by weight). The higher the percentage of cocoa, the lower the amount of sugar, the less sweet and the more bitter the chocolate will be. As a general rule of thumb, the more bitter the chocolate, the more flavonols it contains. Now milk chocolate on the other hand, contains few if any health benefits and in fact is probably more harmful than helpful. While it does contain some flavenoids (less than half the amount of its darker counterpart) it still does not provide any health benefits. This is not just due to its lower levels of flavenoids, but also because the milk binds with the flavenoids, making them unavailable for us to use (also drinking a glass of milk when eating dark chocolate, will also prevent our bodies from fully benefiting from all the antioxidant powers). 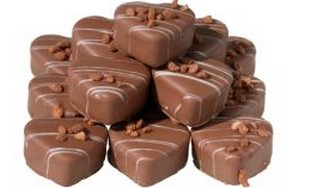 Chocolate heartsAnd white chocolate? Forget about it! It doesn’t even rank. In fact white chocolate technically even isn’t chocolate as its lacks cocoa solids. It is just a mixture of cocoa butter, milk, sugar and often other flavors such as vanilla.  While creamy and delicious, it contains no flavonoids whatsoever and therefore zero health benefits. Trick or treat?The first thought that probably comes to mind, is what about the fat content?  Isn't all that fat is bad for you? This is a little confusing as the majority of fat in cocoa butter is the saturated fat stearic acid. However, despite being a saturated fat, stearic acid has a neutral affect on cholesterol and therefore does not cause any damage. However, just because chocolate itself does not affect our cholesterol, we still need to be cautious of the other ingredients that may have been added to the chocolate (that will increase the fat and calorie content). A caramel-marshmallow-nut-covered dark chocolate bar, no matter how much cocoa it may contain, is by no means healthy. In order to justify eating chocolate for "health" reasons, we need to consume pure, dark unsweetened chocolate as it has the highest levels of cocoa, and therefore the highest levels of flavanols. A small 1.6 ounce bar of dark chocolate does just the trick. Some like it hotWhile a small square of dark chocolate a day may help keep the doctor away, it is now believed that a hot cup of cocoa may do the job even better. Researchers now say drinking cocoa may be the best way to harness the health benefits as the hot liquid version tends to trigger the release of more flavonoids than its solid cold counterpart. And there’s a plus side too: while a 40g bar of chocolate contains about 8g of fat, the average cup of hot cocoa contains only 0.3g. The verdict: It may not be exactly a chocoholics dream – but it is true a small 1.6 gram square of 75%+ dark chocolate is actually good for you!
Advertisement
Subscribe for our daily newsletter