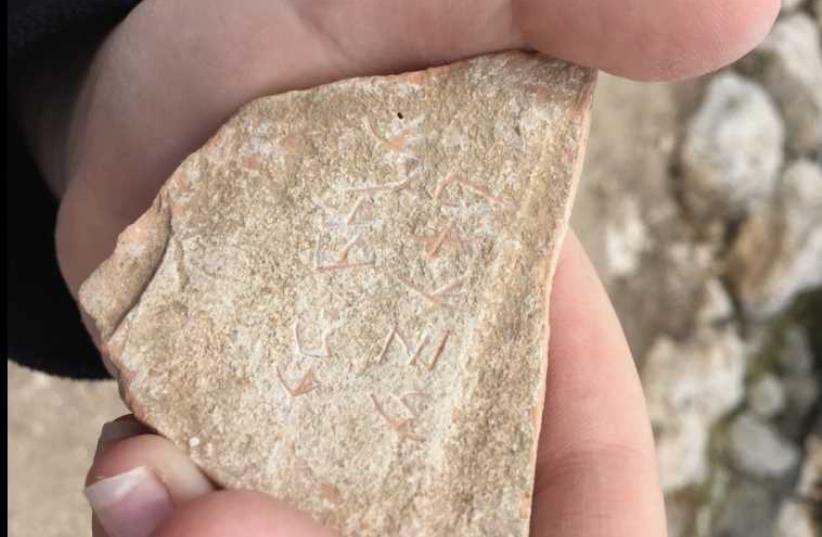 A pottery shard found on the tour.
(photo credit: COURTESY FUN IN JERUSALEM)
Advertisement
This year, we all faced the same challenge: what to do in the rain to celebrate Independence Day and entertain our kids. I was determined to make it a memorable Yom Ha’atzmaut, even if the weather wasn’t in our favor. I checked my weather app and saw that in the Beit Shemesh area the rain was expected only after 1 p.m., so we got out of the house early and drove out to Moshav Tzafririm and Nekudat Motza to start our guided family bike tour.Uri, the manager of Nekudat Motza, met us there and set us up with the right bikes and helmets, including a trailer for our three-year-old and a tandem bike for our eight-year-old. We headed out with our guide, Dolev, while the gray clouds threatened from above. We knew we had to get our bike ride in before the rain began.It was an incredible ride. The winds blew away the clouds and gave us an extra push up the hill. As we rode through Adullam Park up and down the hills, the scenery was incredible. Large lush fields, rolling green hills, and a herd of sheep could be seen in the distance. It was the perfect Independence Day activity for a family with kids of all ages because it combined sports, nature and history of Israel.We each rode at our own pace on a mix of smooth and rugged bike paths. Dolev told us about the history of the area and pointed out special flowers, leaves and other natural sights along the way. He told us that at the beginning of spring, the hills are filled with a greater abundance of beautiful, colorful flowers, so we marked our mental calendar to come back again next February.At the top of one of the hills, we came to the ruins of Etri, an ancient town from just after the Second Temple period. We climbed through the ruins and explored what was left of the homes, mikvaot and synagogues. The boys and Dolev climbed into the tunnels that were built under the houses for protection, while my husband and I waited above to see where they would exit. Dolev knew how to make the adventure fun for all ages.From the top of one of the houses, we could see Hebron to our right and Jerusalem to our left.At the end of our tour, my 11-year-old son picked up an old piece of pottery and screamed with excitement. This might sound like it’s right out of a movie, but it’s true! He recognized ancient Hebrew writing on the back, and our guide pulled out an iPhone to Google the ancient Hebrew alphabet.With bated breath, we waited to see if the message was legible. Sure enough, it spelled “Michael Ben- Baruch.”The guide explained to us that the artifact we had found might not be authentic, but the “thrill of the find” kept my boys smiling for the rest of the day.We carefully wrapped the piece and left a message for the Israel Antiquities Authority to set up a time to come and see it. They will be able to tell us if it’s authentic or if it was placed on the scene recently.As we drove back to Jerusalem, the rain began to fall hard. It was an Independence Day we will all remember. We look forward to going out there again during different seasons to see how the landscape changes and to take another family bike ride. Nekudat Motza – Trailhead Moshav Tzafririm (in the Kakadu building) [email protected] (02) 579-9268 The writer is the founder and FUN Expert at Fun In Jerusalem (www.funinjerusalem.com). She lives in Jerusalem with her husband and three kids and loves to inspire family fun. You can reach her at [email protected]