A new program aims to connect fashionistas to Israel, one stitch at a time.

By BECKY BROTHMAN
OCTOBER 4, 2017 17:56
Participants, who this past summer came from the US, Canada and Argentina, spend the day on a Tel Aviv beach.
(photo credit: IRA KHRAKOVSKY DOTAN)
Advertisement
A well-known proverb proclaims that “clothes make the man,” but can the same be said about a nation? Fashionating Israel, a new Taglit-Birthright Plus extension program, aims to show young Diaspora fashionistas that style workshops can tell the story of Israel just as well as – or perhaps better than – political seminars. The design conceptThe program is the brainchild of Liraz Cohen Mordechai, an Israeli fashion lecturer and blogger, now based in New York, who started her fashion career as the training and development manager at Zara Israel. Wanting to “contribute to the larger society,” she left her position to become an Israel Fellow at Duke University in Durham, North Carolina, where she introduced students to Israeli culture and society. After her term at Duke was finished, she moved to New York to begin a management degree at the Fashion Institute of Technology. However, she was feeling torn between her two passions: fashion and Israel advocacy. “I had this ‘aha moment’ and I realized I didn’t need to choose! I can talk about the history and culture of Israel from the angle of fashion – and it actually connects really amazingly together,” she said. “The evolution of Israeli fashion conveys a message of who we are and what kind of identity we want to present to the world. By exploring Israeli fashion, you can learn a lot about Israel.” Now fashion serves a higher purpose for Cohen Mordechai. She founded Fashionating by Liri, a company with two missions: to empower Israeli fashion designers and brands and to educate people about Israel through fashion. 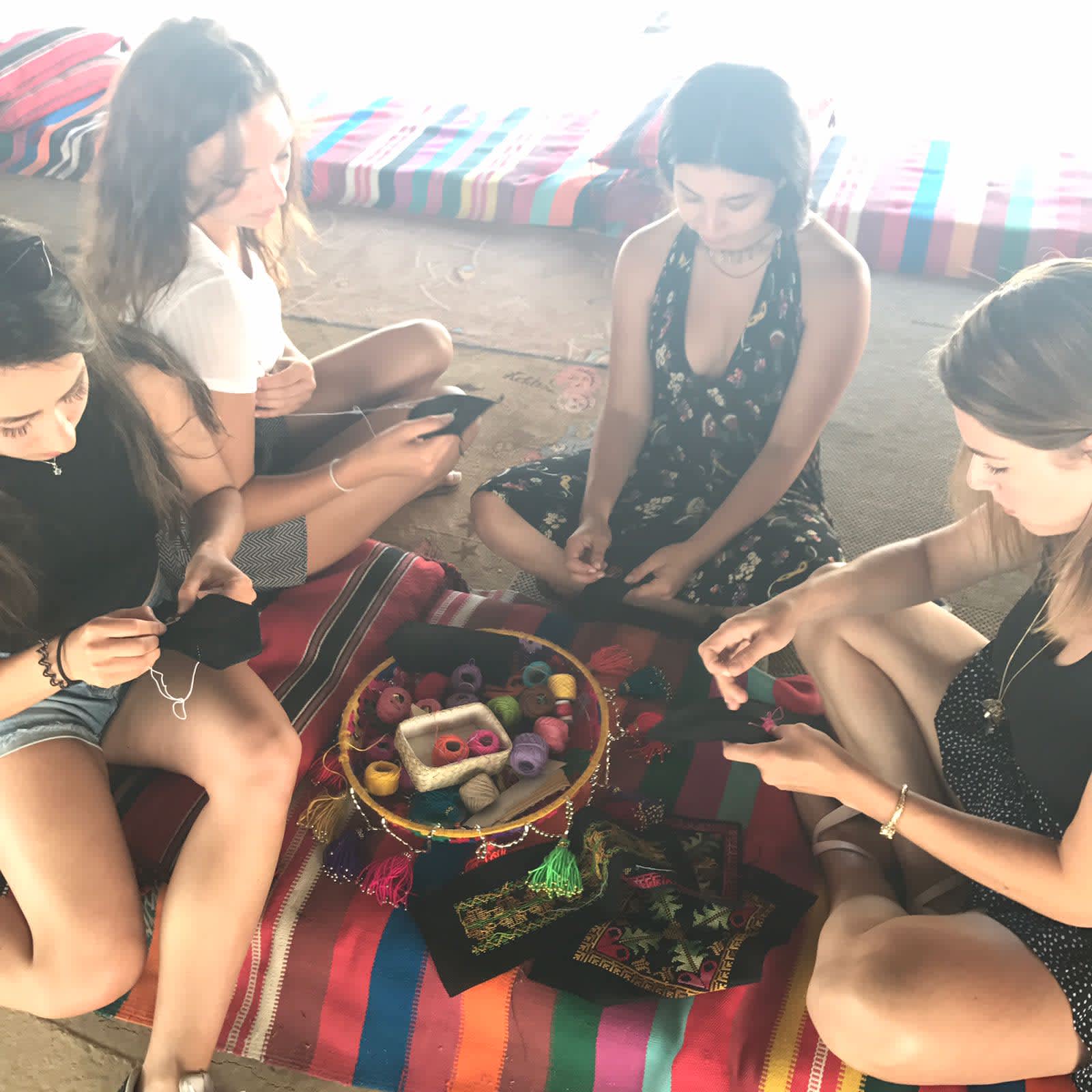 Fashionating Israel participants at an embroidery workshop (Courtesy)To help achieve her goals, she partnered with Taglit-Birthright Israel for the first time this past summer. Birthright participants were offered the option to add the four-day Fashionating Israel program as an extension to their standard 10-day Israel trip. The program, managed by Rotem Ben-Lulu in Israel, features a jam-packed itinerary. Participants meet with innovative designers, show off their creative skills in hands-on workshops and learn about Israeli fashion’s past, present and future. Workshops this summer have included embroidery classes with Beduin women, a professional Instagram tutorial with a top social media expert, and an encounter with top Israeli model Maayan Keret. Participants this summer have come from all over, including the US, Canada and Argentina. Like all other Birthright Israel Plus extensions, Fashionating Israel is subsidized and costs just $250 per person, including hotels, food and transportation. Cohen Mordechai refers to her program as “boutique” and says that she is bringing something new and different to the table. For people interested in fashion and art, the program can connect them to Israel in a way that a traditional program focused on the conflict and politics cannot. “Fashion is the tool,” she says. “If, at the end of the program, people feel more engaged and connected to the land and understand the culture and history better, that means I accomplished my goal.”Israel Defense Fashion 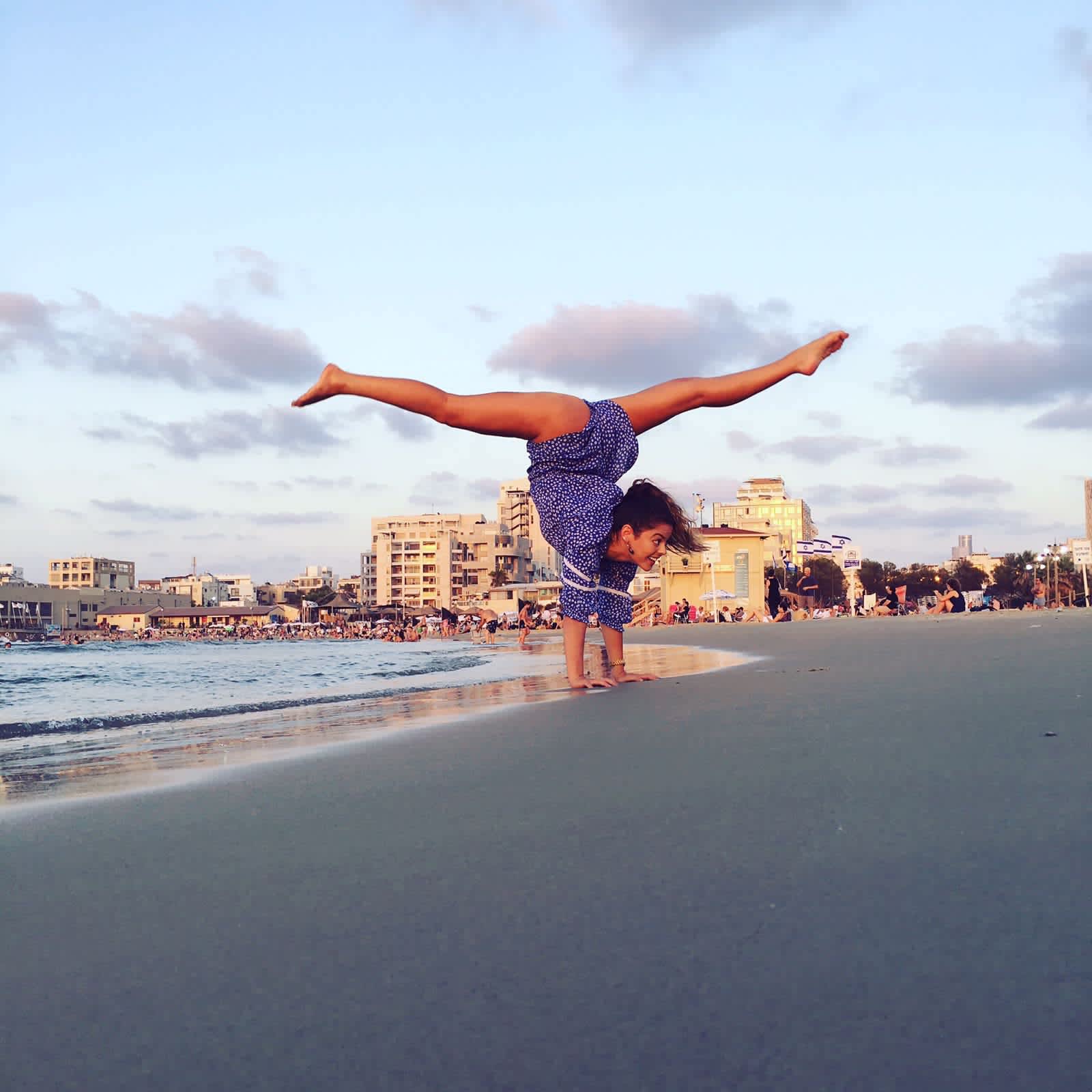 A Fashionating Israel participant poses on the Tel Aviv beach (IRA KHRAKOVSKY DOTAN)While the hotels and meals may be boutique and glamorous, almost all the participants when asked to describe Israeli fashion used the same word: casual. Walking down the streets of Tel Aviv, there is no doubt that the need for comfort reigns supreme for Israelis. But what else drives Israeli fashion sense today? “We’re going backwards and forwards at the same time. You’ll see more and more designs that are taken from biblicaltimes or from the beginning of Israel,” Cohen Mordechai says. “People want to embrace the heritage we had in the ’40s, ’50s and ’60s, so you’ll see many designers coming back to the roots of what we considered Israeli fashion.” Designers are bringing kibbutz fashion back into style. This can be seen by the resurgence of Ata, an Israeli textile company founded in the 1930s. The company, originally associated with the kibbutz movement, inaugurated a new clothing store in 2016, 30 years after they disbanded. Clothing designers are also going back to their ethnic roots, featuring traditional Yemenite and Ethiopian patterns with a modern twist. Fashionating Israel participants experienced this firsthand at the Jewish Yemenite Culture and Art Museum, where they learned about gold crafting and other traditional fashion techniques. Perhaps unsurprisingly, Israeli fashion is also influenced by the IDF and its battlefield history, according to Cohen Mordechai. “After the Six Day War, soldiers became like celebrities. In magazines, people didn’t read about celebrities, they read soldiers’ stories from the battlefield. Soldiers walking in uniform would get discounts, girls would chase them – they got all the benefits,” she said. “So subconsciously they said to themselves, ‘I’m getting all these benefits wearing the uniform, let me wear it even when I’m off duty.’” This led to the modern military trend, she says – incorporating camouflage and other military elements in everyday clothes – for civilian and soldier alike.Start-up style 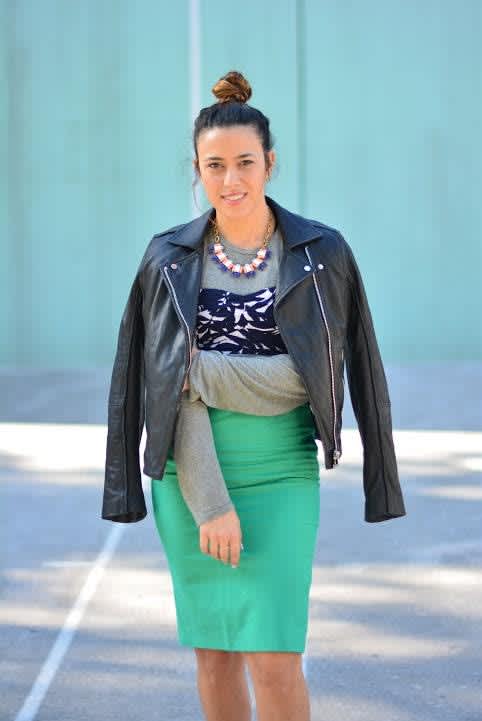 Liraz Cohen Mordechai, founder of Fashionating Israel (GABRIELLA ZACCHE)“The future of Israeli fashion, like the future of fashion in general, lies with the connection between fashion and technology,” Cohen Mordechai says. As the manager of the New York-Israel Fash&Tech group, a community of Israeli start-ups focused on technologically innovative fashion, she knows this area well. Fashionating Israel participants benefit from her industry contacts, meeting with some of Israel’s most exciting style start-ups during the program. Israeli designers are pioneering the use of smart fabrics, 3D printing and other technological solutions, and bringing their innovations to the global fashion industry. “We love to say we’re the startup nation. I think we’re the start-up nation not only in medtech or data, but also the start-up nation in fashion,” she says with pride. So what’s next for Liraz Cohen Mordechai and Fashionating Israel? Birthright is just the beginning, she says. She wants to expand and create fashion trips for Jews and non-Jews alike. Ultimately, the goal is to showcase her two life passions, fashion and Israel, to as many people as possible.

In other words, the future's so bright, we gotta wear Israeli-designed shades.