People of the bike?

'In Jerusalem' explores the growing phenomenon of e-biking in the capital. 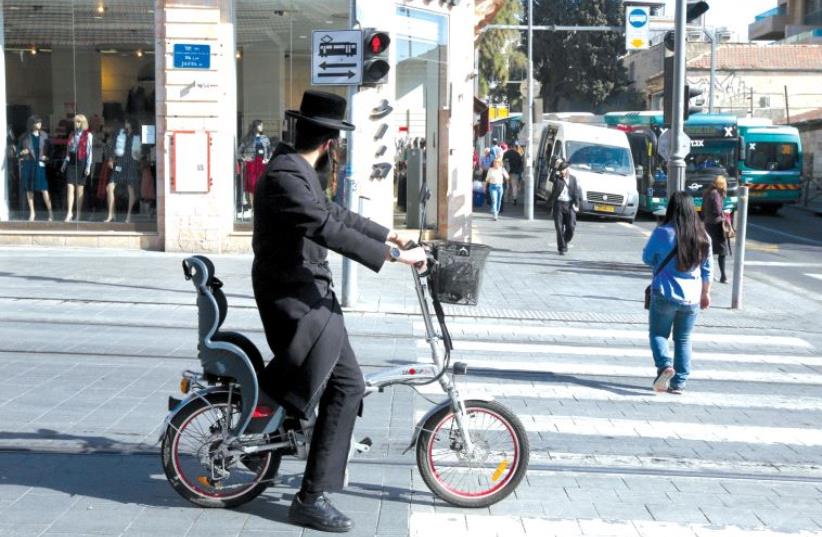 Bikes in Jerusalem
(photo credit: MARC ISRAEL SELLEM)
Advertisement
Scholars differ on who is credited with first articulating the observation that the shortest distance between two points is a straight line.Leading candidates for the honor include Archimedes, Pythagoras and Euclid.A much more difficult – and for many of us, more pressing – question is: What is the most efficient way to travel the distance between two points in Jerusalem? Jerusalem offers people on the go a variety of ways to get to a destination: private car, bus, light rail, taxi and, increasingly, electric bikes. It is estimated that some 200,000 e-bikes have been purchased in Israel in the past few years, and they are becoming ubiquitous in the capital.
Read More...
You see them nearly everywhere, but should you consider buying one? What is driving the e-bike craze? In Jerusalem asked some key questions to local e-bike shop owners and enthusiasts and summarized their answers.
What is an e-bike?An e-bike is a bicycle with a motor in the rear hub that helps propel the rider. E-bikes are more similar to bicycles than they are to motorcycles. You have to pedal them, but the motor assists you, making your pedaling easier.The motor is powered by a removable battery that you recharge by plugging it into a wall socket. You can adjust how much assistance you want from the motor – most e-bike models offer five levels of power, ranging from 10% to 90%. You can also ride the e-bike like a bicycle, solely on pedal power, without any assistance from the motor. This extends battery life and range by taking advantage of downhills and flat areas when pedal power alone is sufficient, and the extra exertion by the rider increases the fitness benefit.There is a misconception that pedaling or regenerative braking can recharge the e-bike battery. However, this is not the case.
Why are so many Jerusalemites buying e-bikes? For many people, e-bikes serve as a sort of poor man’s motor vehicle. Car and motorcycle ownership can be a significant drain on one’s time and resources. Purchasing them, servicing them, paying for driving lessons and a test to get a license, insuring them, filling and refilling the gas tank – these things require a significant time and financial commitment that some people are unwilling or unable to make.Unlike motor vehicles, e-bikes have no license requirement, no registration, no inspection, no insurance, do not use gasoline, yet they offer a significant degree of freedom and mobility. It is not surprising that so many people are acquiring them as a primary or secondary vehicle.Here’s how e-bikes fare when compared with cars and ordinary bicycles:

• E-bikes vs cars:
Obviously, one would prefer using a car to travel long distances or to travel in inclement weather, but for a short trip on a nice day in the center of the city, e-bikes, liberating you from traffic jams, can be more fun and even quicker than driving. E-bikes cost much less to own and operate than cars and can go places that cars can’t. The exercise one gets from riding e-bikes makes them healthier to use; and the fact that they are “green” with a relatively light carbon footprint makes them better for the environment. E-bike use improves inner- city air quality, reduces traffic congestion and reduces noise pollution.Additionally, when you reach your destination, you can hop off your e-bike and park it virtually anywhere at no cost and without hassle, and then take perverse pleasure in watching frustrated drivers circle the block in search of a parking space on the street or in pricey pay-by-the-hour parking lots.