Conservative Catholic blog Rorate Caeli called Wahlberg out for his support of gay marriage, which the Church strongly opposes. 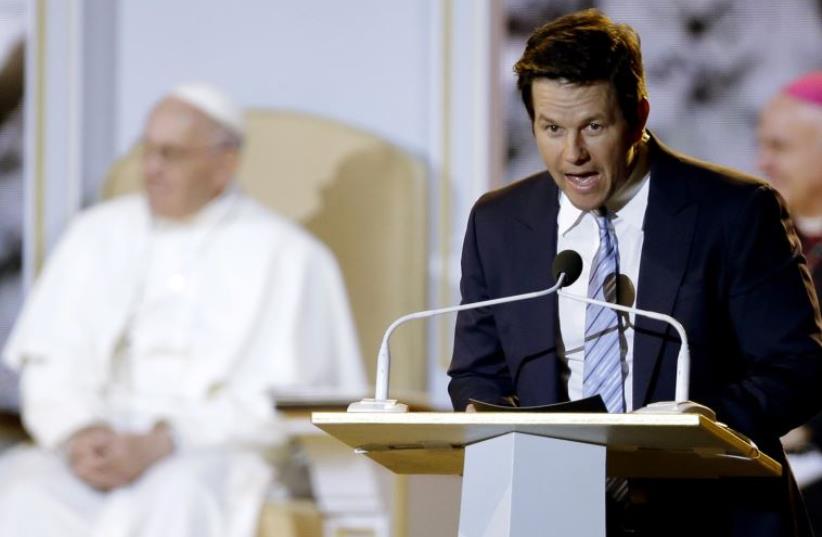 Pope Francis (L) listens to actor Mark Wahlberg speak at the Festival of Families in Philadelphia
(photo credit: REUTERS)
Advertisement
Actor Mark Wahlberg, a former rapper and one-time underwear model who once played a porn star and served time for assault as a teenager, raised eyebrows on Saturday in his role as host of a Philadelphia concert honoring Pope Francis.Wahlberg, who praised the Pope and told the crowd that he attributed much of his success to his Roman Catholic faith, joked with performers and introduced presenters before a crowd of hundreds of thousands of people.Conservative Catholic blog Rorate Caeli called Wahlberg out for his support of gay marriage, which the Church strongly opposes."'Catholic' actor who supports unnatural 'marriage' MCs papal event," the blog said on its Twitter feed early in the event, which also featured Grammy Award-winning singer Aretha Franklin.Others pointed out that Wahlberg played the role of a porn star in the 1997 film Boogie Nights and that Calvin Klein ads featuring Wahlberg clad only in underwear two decades ago adorned New York's Herald Square, not far from where Francis said Mass on Friday."So the Pope is attending an event hosted by an actor that portrayed a porn star. Is a strip club next?" a Twitter user using the handle @BannermanJack quipped.Wahlberg has drawn controversy over the past year for seeking a pardon for the 1988 assault of a convenience store owner as he tried to steal alcohol, according to the Boston Globe. Wahlberg defended the request, tied to an effort to secure a license for a restaurant, in a December television interview, saying he had turned his life around."I'm just committed to making sure that I've paid for my mistakes," he told NBC's "Today" show in December.A boy soprano who sang "Pie Jesu" early in the performance stopped to hug Wahlberg on his way off the stage, telling the actor that he loved the movie Ted, which features a foul-mouthed talking teddy bear."I told him, 'You're not old enough for movies like that,'" Wahlberg joked to the crowd.