As first lady, Hillary was a prized Jewish keynoter - until she kissed Suha Arafat

Last week, Hillary Clinton formally announced she would run once more for president. 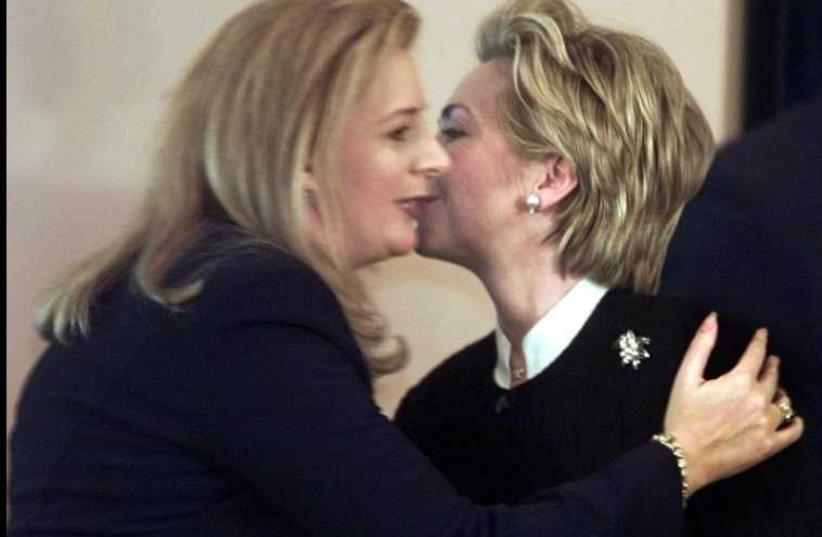 Then-first lady Hillary Rodham Clinton (R) and kisses Suha Arafat, wife of the late Palestinian leader Yasser Arafat, November 11, 1999
(photo credit: REUTERS)
Advertisement
Last week, Hillary Clinton formally announced she would run once more for president, and not surprisingly, many pundits and voters are scrutinizing her record as President Barack Obama’s secretary of state and, before that, as New York’s junior senator.We decided to go back a little further in time to Clinton’s eight years as first lady. During those years,  she was a frequent speaker at Jewish organizations, starting with a 1993 gig at the Reform movement’s biennial convention where she put a Jewish spin on her health care reform plan:

Clinton compared the effort to provide universal health care coverage with the message embodied in the Torah portion that Jews would be reading the next morning during Shabbat services.“Abraham receives a command to leave his father’s house and meet new challenges God has put before him,” she said.She also cited the 12th-century scholar and physician Maimonides as someone who stressed the importance of preventive health care, as she listed procedures the president wants included in the reform package.Although Clinton’s health care plan famously flopped, she continued her not infrequent appearances at Jewish venues. In 1994 she and President Bill Clinton attended Rosh Hashanah services on Martha’s Vineyard, Massachusetts, in what JTA reported “is believed to be the first time that a US president has attended a High Holiday service.”A few months later, as the keynote speaker at an Israel Bonds fundraiser,  Clinton suggested that Americans turn to Jewish scholars such as Hillel and Martin Buber for guidance:“These scholars show us how to dialogue, discuss and learn, and how central family culture and community are,” she said, “I wish we could clone this and make it available to all people.”In September of 1995 the first lady keynoted for two Jewish organizations in two days: the United Jewish Appeal’s National Women’s Campaign Lion of Judah Conference and the Chicago regional office of the American Committee for the Weizmann Institute of Science in Israel.But her honeymoon with the Jewish establishment drew to a close in 1998, when, in a satellite hookup with Israeli, Palestinian and Jordanian teens from the Seeds of Peace group, Clinton said, in response to a question, “I think it will be in the long-term interests of the Middle East for Palestine to be a state.”“The comment, including at least seven other references to statehood for the Palestinians and the word ‘Palestine’ set off a fury in Israel and among many American Jewish groups,” JTA reported, adding that her “words stand in direct contradiction to US policy, which for decades opposed the creation of a Palestinian state.” [US and Israeli policy on Palestinian statehood had softened in the years after the Oslo Accords, but Clinton’s 1998 comments hit a nerve because they were made at a time when the Palestinians were exploring a unilateral statehood declaration.]Things only got worse a year later when, during a visit with Palestinian Authority President Yasser Arafat’s wife Suha, Clinton did not immediately condemn the Palestinian first lady’s claim that Israel was using poison gas to pollute the West Bank’s water and land.Clinton, who by then had already made clear she planned to run for the Senate in 2000, faced a storm of criticism, along with the widespread publication of a photo of her kissing Mrs. Arafat, but she defended herself by saying that the remarks “were not as harsh in the English translation that she heard.”In the months that followed, Clinton’s Jewish critics seized on various other missteps, including an appearance at Rev. Al Sharpton’s headquarters.None of this stopped Clinton from triumphing in her bid for New York’s Senate seat in 2000, an election in which she enjoyed considerable Jewish support.And that victory set in motion Clinton’s full-fledged political career consisting of eight years in the Senate and four years as secretary of state. Only time will tell whether it will culminate in a return to the White House.