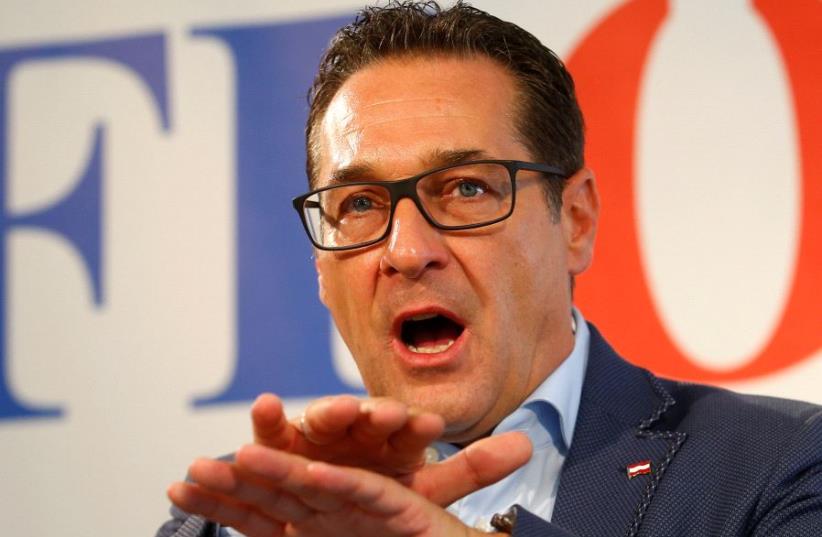 Head of Austrian Freedom Party (FPO) Heinz-Christian Strache addresses a news conference in Vienna, Austria, April 25, 2017.
(photo credit: REUTERS/HEINZ-PETER BADER)
Advertisement
Not recognizing Jerusalem as Israel’s capital is “totally absurd,” Heinz-Christian Strache, head of Austria’s far-right Freedom Party, said in a meeting with Likud MK Yehudah Glick in Vienna on Wednesday.The Freedom Party has been notorious in Israel since the 1980s, when Jörg Haider, a Nazi sympathizer, became its leader, and the Foreign Ministry has expressed concerns about the party’s rise over the years. Yet Strache, whose party is polling in second place ahead of October’s legislative election, has sought to distance himself from Haider’s antisemitism, visiting Yad Vashem last year.The Austrian politician asked Glick to deliver a letter to Prime Minister Benjamin Netanyahu, in which he wrote he will do all that is in his power to move the Austrian Embassy from Ramat Gan to Jerusalem.The letter reads: “I am honored to congratulate you, sir, on behalf of the 50th anniversary of the reunification of Jerusalem, the capital of the State of Israel... Given that in Jerusalem are located the State’s President Office, the Prime Minister’s Office, most of the Governmental Ministries, as well as the Knesset – it is totally absurd not to locate our Austrian Embassy in Jerusalem, as we do in other capitals of other countries all over the world. Moreover the State of Israel possesses the right to build wherever is required in the Land of Israel.”Glick, who said he was invited as “a symbol of Jerusalem and the settlements,” characterized the hour-long meeting as “very friendly,” and that Strache loves Israel.The Likud MK said Strache specifically mentioned Haider, calling his leadership a bad time in the party’s history, but said he wants to make a change in the party, and asked for help normalizing relations between the Freedom Party and Israel.“We spoke a lot about Jerusalem, and how Europe now understands Israel more, because the dangers Israel faced from the Arab world are now coming to Europe,” Glick recounted. “He said he doesn’t have a problem with people who are Muslim, but he is afraid that all of Europe will change... Strache said that if Europe is overflowed with too many radical Muslims, they’ll take over. He supports accepting a certain amount of refugees for humanitarian reasons, but not to open the doors freely.”Strache also called BDS antisemitic and anti-Europe.Glick added that he is not endorsing the Freedom Party, but he thanked Strache for his warm words and agreed to pass the letter on to Netanyahu.Austrian Ambassador to Israel Martin Weiss said that the Freedom Party is one of the major parties competing in the upcoming election which has a chance of doing well, and that Strache could be a member of the new government.Strache’s stance on Jerusalem “fits the party, because they’ve taken a very pro-Israel stance. These days, a lot of politics is about security and immigration, and they feel that Israel has good answers,” Weiss said.“What is true, is that they have tried to be quite strict with the party on the antisemitism front. If someone made statements or Facebook posts, they were kicked out of the party. They really tried to change the tone,” the ambassador added.In 2012, Strache was accused of antisemitism over a cartoon posted on his Facebook page that depicted a fat banker with a hooked nose and six-pointed star buttons on his sleeve. The banker was gorging himself at the expense of a thin man representing “the people.”Austrian President Heinz Fischer called it “the low point of political culture which deserves to be universally and roundly condemned.” Strache denied being antisemitic and has since repeatedly denounced antisemitism.Reuters contributed to this report.