Finland was attacked by the USSR during the war, and subsequently fought against the Soviets alongside Nazi Germany after the initiation of Operation Barbarossa in 1941. 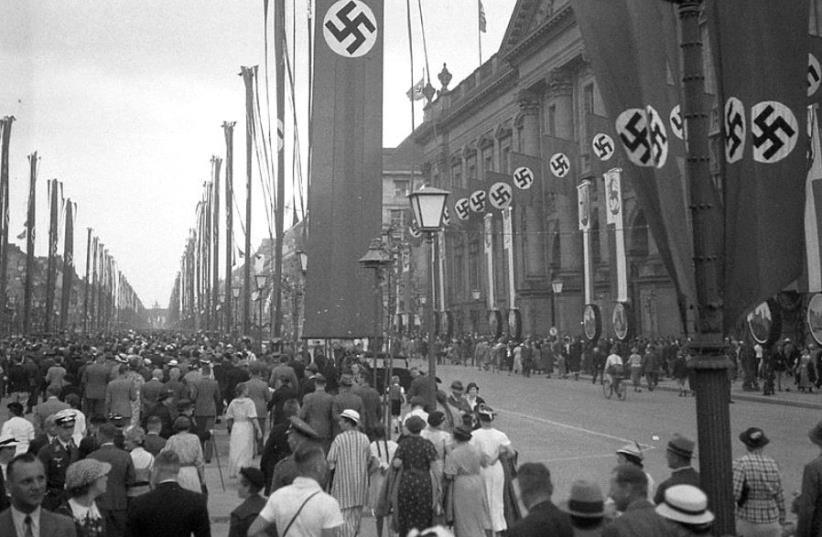 The Nazi regime organized the mass displays of Nazi propaganda and nationalist symbols across Germany during the 1936 Berlin Summer Olympics events
(photo credit: FOTO:FORTEPAN / LŐRINCZE JUDIT VIA CC BY-SA 3.0)
Advertisement
The government of Finland has announced the commissioning of an investigation into the actions of Finnish volunteers with Nazi Germany’s Waffen SS, following newly unearthed evidence that these fighters may have been involved in atrocities against Jews and other civilians on the Eastern Front during the Second World War.The Finnish Prime Minister’s Office commissioned the country’s National Archives institution to conduct the investigation, following a request in January by the Simon Wiesenthal Center (SWC), and ordered that it be completed by November.Finland was attacked by the USSR during the war, and subsequently fought against the Soviets alongside Nazi Germany after the initiation of Operation Barbarossa in 1941.But Finland refused to hand over its local population of some 2,000 Jewish citizens to the Nazis, all of whom survived the war.There were, however, some 1,400 Finns who served in the Waffen SS on the Eastern Front, including in its 5th SS Panzer “Wiking” Division, along with volunteers from Denmark, Norway and Sweden.According to SWC-Israel director Ephraim Zuroff, evidence emerged in recent years that Danish and Norwegian volunteers had participated in atrocities against Jews, but it was nevertheless thought the Finns had not been involved.Recent historical research, however, has cast doubt on the lack of Finnish involvement. There is some evidence that war crimes against Jews were committed in Ukraine by these units, which led to the SWC request to the Finnish government for a public inquiry.“As time goes by and the efforts to bring Nazis to justice are declining day by day because of the death of suspects and lack of political will to bring them to justice, one of the major issues has become the fight over the narrative,” said Zuroff.“In various countries there have been many attempts to hide or minimize the role played by local collaborators. This is a major aspect of the Holocaust, and the identity of the perpetrators should not be erased or falsified.”