philippino baby 370
(photo credit: IDF Spokesman)
Advertisement
The first baby born at the Israeli Defense Forces field hospital in the Philippines was delivered safely on Friday. The mother named the boy Israel.
The IDF sent a 148 person delegation to the Philippines on Wednesday in order to provide search, rescue and medical services in response to super-typhoon Haiyan. 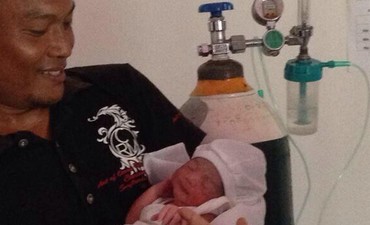 Baby born Fri, Nov. 15, at IDF field hospital in Philippines, photo: IDF Spokesman
According to the IDF Spokesman's Office, a field hospital was built and is able to treat 500 people at a time. The hospital includes an x-ray room, a children's department, an ambulatory care department and birthing facilities.  The hospital is operated by IDF doctors, nurses, paramedics, pharmacists, mental health professionals, x-ray technicians and lab workers.
Additionally, the IDF will be helping restore infrastructure with electricians and other professionals.
Defense Minister Moshe Ya'alon spoke with his Filipino counterpart, Voltaire Gazmin, on Friday, saying that it was Israel's "moral obligation" to help the Philippines in the wake of the typhoon, which killed thousands of people earlier this week and has left the island nation with a humanitarian crisis.
"Our two nations share a trusting relationship, and in these moments we see it in action," Ya'alon told Gazmin.
"The Israeli people feel the pain of the Filipino people and stand by their sides in this difficult hour. I am hopeful that the IDF delegation sent to the Philippines will help as much as is possible with saving lives," he added.